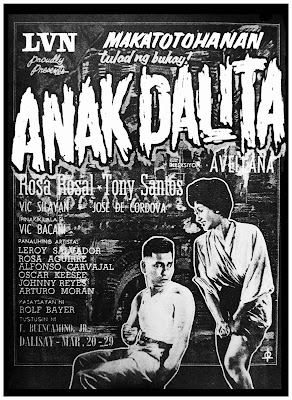 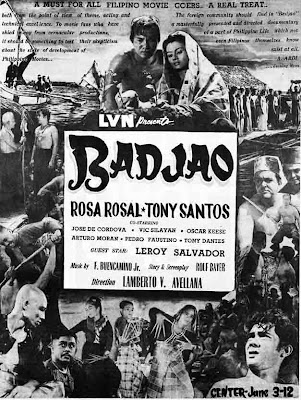 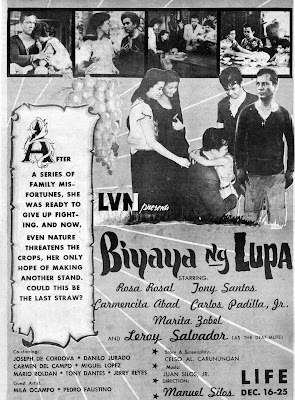 
The movie Anak Dalita (1956), an award-winning film by Director Lamberto Avellana, was an example of Doña Sisang’s preferences {Doña Sisang is Narcisa B. De Leon, founder and owner of LVN Pictures}. She didn’t like the idea of producing Anak Dalita. It was a film about poverty. It would star a non-star in Tony Santos. There was no room for a dance sequence. Nothing in her infallible instinct for public preference told her that it would make money. But her son Manny believed in the story. And so it was made. Anak Dalita was no box office hit, but it won the Golden Harvest Award for best picture and the FAMAS International Prestige Award. As Avellana and Manny De Leon brought home the trophies, Doña Sisang teased, “Ano ngayon ang gagawin ninyo sa mga kopang iyan? Makakain niyo ba iyan?”

Biyaya ng Lupa captures authentic values, hopes, joys, dreams and sorrows of a Filipino family rooted in the land. Winner of the best picture award by FAMAS, the screenplay is based on a story by Celso Al. Carunungan. Direction is by Manuel Silos. The stars are Tony Santos and Rosa Rosal with Leroy Salvador, who won best supporting actor at the Asian Film Festival.

Today, Anak Dalita, Badjao and Biyaya ng Lupa are ranked as three of our greatest Filipino movies of all time.

I saw this great movie of Avellana during it's screening at Cinema Paraiso in NCCA, Intramuros, as part of NCCA's Pelikula at Lipunan (?) in 2004 or 2005?. Isa pa rin ito sa pinakapaborito kong mga pelikula ni Avellana na napanood ko, alongside with Anak-Dalita, Badjao and A Portrait of the Filipino As An Artist.

PROUD TO BE PINOY!!

the only juz said...

Napanood ko na rin ang movie na badjao... Very authentic nang pagkakapresent ng film
It shows the great culture, norms, laws and probably the ordeals experienced by every badjaos in our history...
Ang galing nito... May DVD kami nyan at nabili ko for 350pesos... Rosa Rosal and Tony Santos proved on this movie that the PHILIPPINE MOVIE IS THE MOST ANTICIPATED AND HONORED ART OF THE ASIAN RACE!!!

Arturo Moran is part of Anak Dalita. Is he the same actor as Bomber Moran who was sometimes credited as Arturo 'Bomber' Moran? and in the IMDB, Bomber Moran's birthdate is 1944.

Ramon Zamora had a cameo as one of the informal settlers in the church. He can be seen at the end of the film during the paglilipat sequence.