THE LAPIDS AS LEON GUERRERO 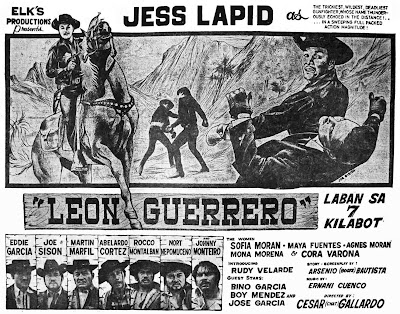 Leon Guerrero: Laban sa 7 Kilabot (1968) - Stars Jess Lapid, Eddie Garcia, Joe Sison, Martin Marfil, Johnny Montiero and Sofia Moran/ Directed by Cesar 'Chat' Gallardo
Leon Guerrero, the Pinoy "Lone Ranger" symbolizes the fight of good over evil and the triumph of right over wrong. The name was always associated with actor Lito Lapid. But did you know that before Lito assumed the role of Leon Guerrero, it was his uncle, Jess Lapid Sr. who introduced this legendary gunslinger to the local movie scene. The movie, Leon Guerrero: Laban sa 7 Kilabot was released in 1968 a few months before he was gunned down in a QC nightclub. In 1982, 14 years after, the young Lito Lapid came up with Alamat ni Leon Guerrero. 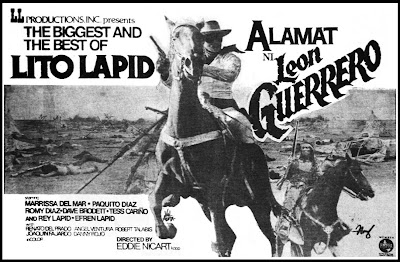 "Alamat Ni Leon Guerrero" was sort of a Filipino version of Hollywood's 1981 hit "The Legend Of The Lone Ranger". Leon wore the white Lone Ranger suit this time.

Anyway Sir. Yours is one of the best blogs I've visited. Thanks for sharing all of this. Far out.

sir, thanks of posting some of lito lapid's old movie pictures. hope that you post other of his old movies, like isla santo nino, anak ng tulisan..thanks.

hi! i was looking for the details of this movie's ost...do you have any idea which recording label owns the rights to the songs used in the film? thanks!

can this be remake for the big screen or in teleseryes? particularly in abs cbn, since he was gonna have it a teleserye sooner in title "the little champ"

A remake of 1968 western/adventure drama also known as the "Lone Ranger of the Philippines" originally played by the late Jess Lapid the original action star of the 1960's era and a remake in 1982 by the role of Lito Lapid as the masked vigilante now on 2013 he is reprise his original role once again for the first time on ABS-CBN tv a new western/teleserye will be debuted to television screens worldwide coming soon...thanks for the information about your comments in your opinion.from:Wayne