Ang Mananandata (1965), the scheduled movie last January 10 was finally shown today at Cinema One, replacing the featured movie, Albano Brothers. The movie was in color and it showed FPJ's skill in horsemanship. Poe played the role of Ariel, a gunslinger and a peace-loving citizen, who avenge the death of his brother (Van de Leon) by a bunch of bandits headed by Ramirez, played superbly by Paquito Diaz. Diaz won the FAMAS Best Supporting Actor award. There will be replay on January 28, Monday, at 9 am. 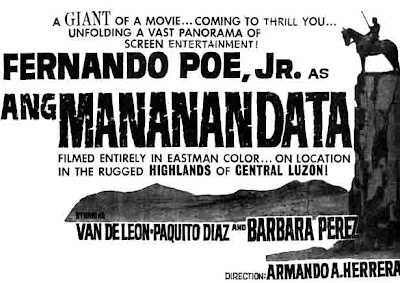