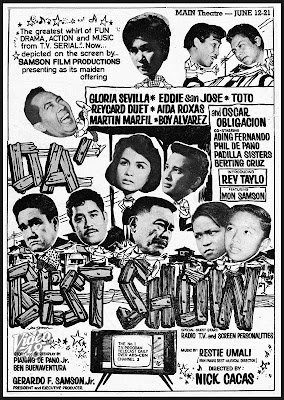 "Da Best Show," the No. 1 ABS-CBN TV show in the 60s that made Oscar Obligacion a household name. It was made into a movie in 1965.
Comedian Oscar Obligacion, whose antics as a bumbling Japanese soldier made generations of Filipinos laugh in a career that spanned stage, radio, television and film, died Friday after a lingering kidney ailment. He was 86. 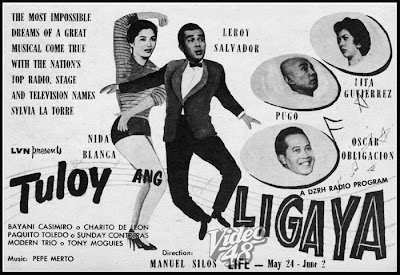 Obligacion started his career onstage at the Manila Opera House and Clover Theater, according to his widow and former LVN Pictures actress Myrna Quizon-Obligacion. With singer Sylvia La Torre, he hosted popular TV programs like Channel 11’s The Big Show and ABS-CBN Channel 3's Da Best Show and Oras ng Ligaya in the 1960s. “His specialty was playing a comical Japanese soldier,” Myrna recalled. “He hosted a radio show called ‘Buy and Sell,’ too.” 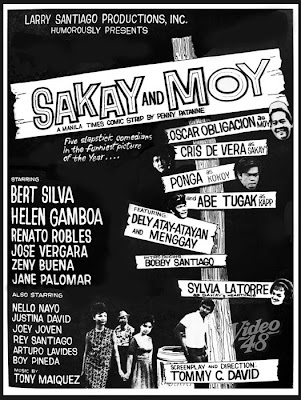 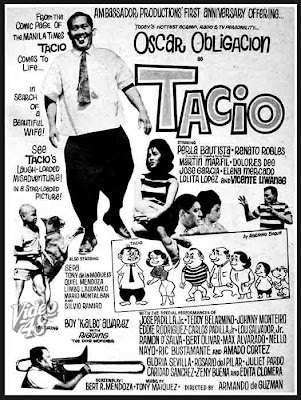 Right- "Tacio" (1963)- Stars Oscar Obligacion (First solo starrer), Perla Bautista, Renato Robles, Martin Marfil, Vicente Liwanag/ Directed by Armando de Guzman
He also acted in 150 movies. “His biggest were Tacio with Perla Bautista and Dolfinger Meets Pantarorong with Dolphy,” said Myrna, his wife of 56 years. “Pantororong was his famous character on Oras.” “We met at LVN where we did movies like Luha at Musika, Tumbalik na Daigdig and Itinakwil,” she said. 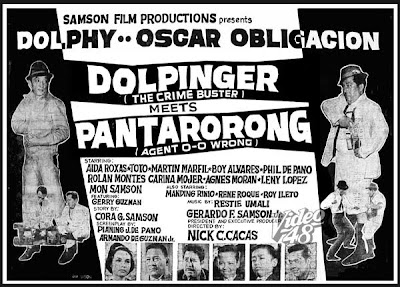 Obligacion parlayed his show biz fame into a successful business venture, Philippine Seating, which supplied theater seats to movie houses like SM Cinemas. “He was generous and loving. He was hardworking, a great provider,” Myrna said. Bautista recalled that “Oscar was funny and easy to work with.” “During a party last year, he surprised people because he arrived in a wheelchair but when the music played, he stood up and danced,” she recalled.
Obligacion had quadruple heart bypass surgery over a decade ago. In November, his health took a turn for the worse. He was confined in a hospital for two months before the family decided to take him home.He had been undergoing dialysis three times a week, until he succumbed to renal failure and pneumonia. Along with his wife, Obligacion is survived by four children, 10 grandchildren and seven great-grandchildren.

"GUY AND PIP" IN A RARE PRODUCT ENDORSEMENT 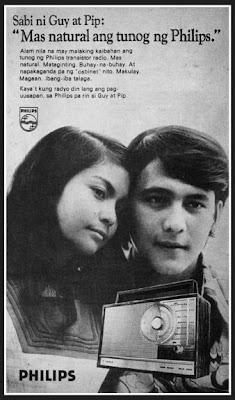 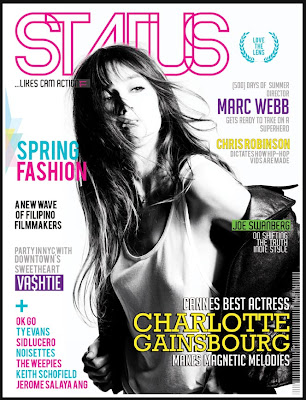 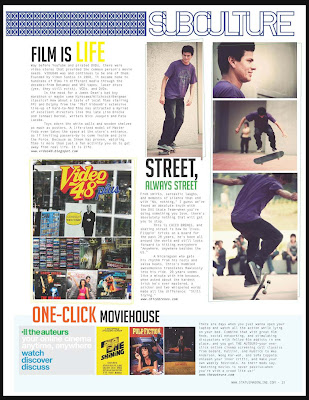 Way before YouTube and pirated DVDs, there were video stores that provided the common person’s movie needs. Video 48 was and continues to be one of them. Founded by Simon Santos in 1988, it became home to hundreds of films in different media through the decades--- from betamax and VHS tapes, laser discs (yes, they still exist), VCDs, and DVDs.In the mood for a James Dean’s bad boy marathon or maybe some Kurosawa/Hitchcock/Bergman classics? How about a taste of local films starring FPJ and Dolphy from the 70s? Video 48’s extensive line-up of hard-to-find films has attracted a myriad of excellent directors like the late Lino Brocka and Ishmael Bernal, writers Nick Joaquin and Pete Lacaba.Toys adorn the white walls and wooden shelves as much as posters. A life-sized model of Master Yoda even takes the space at the store’s entrance, as if inviting passers-by to come inside and join the Force. Because as Simon has proven, watching films is more than just a fun activity you do to get away from real life. It is life.


Thanks to Nante Santamaria and to the staff of Status Magazine. 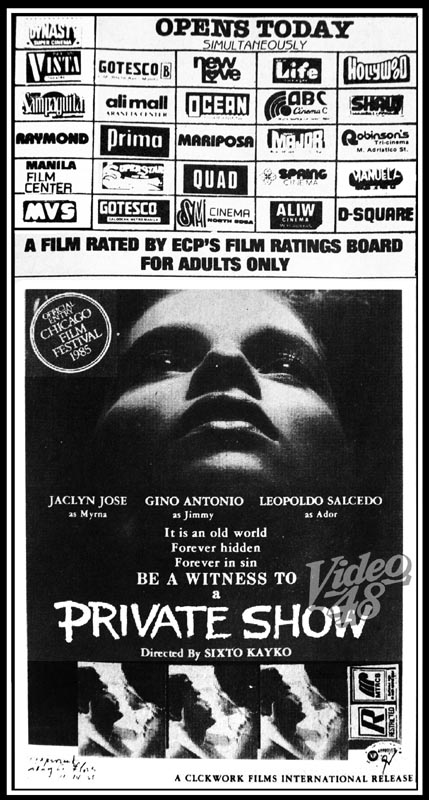 Tunay na Ina, directed by Octavio Solis, once known as the "Dean of Tagalog Movie Directors," tells of a mother's search for her lost daughter. Here's a rare clip of that movie---

(Rosario Moreno) becomes pregnant because she was raped by Antonio (Exequiel Segovia). Before his death, her father (Precioso Palma) gives up the baby for adoption, thinking that no man can ever understand her past. is engaged to Roberto (Rudy Concepcion), a decent, well-off young man. Haunted by her conscience, writes Roberto a letter, admitting her past. Her aunt, afraid that the wedding may be called off, intercepts the letter and hides it. Assuming that Roberto has accepted her in spite of her past, she marries him. 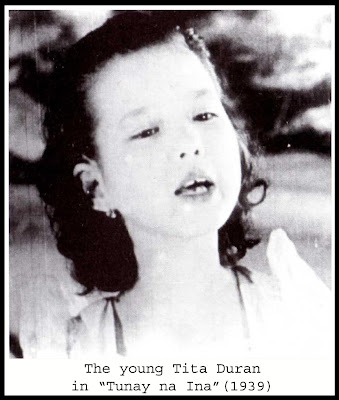 later becomes increasingly aware that Roberto does not know the truth about her. She tries to locate her lost child. Eventually, she sees a child that she thinks is her missing daughter. The child, Tita (Tita Duran), recognizes Aling Andang (Naty Bernardo) as her mother. The story of how Tita came to Andang matches the story of how ’s baby was given away. is now sure that Tita is her child.

Meanwhile, Antonio comes back and blackmails . When later refuses to give him more money, Antonio tells Roberto the truth. Roberto throws out of the house. She goes to Andang and Tita to spend time with her daughter, not knowing that Junior, her son by Roberto is gravely ill. Junior dies. Magdalena is only redeemed in Roberto’s eyes when the aunt produces ’s letter. After Andang almost comes to death on Christmas Eve, decides to adopt both Tita and Aling Andang into their homes.

FILMMAKER BOBBY A. SUAREZ PASSED AWAY, 67

The has lost another of its B movie legends. 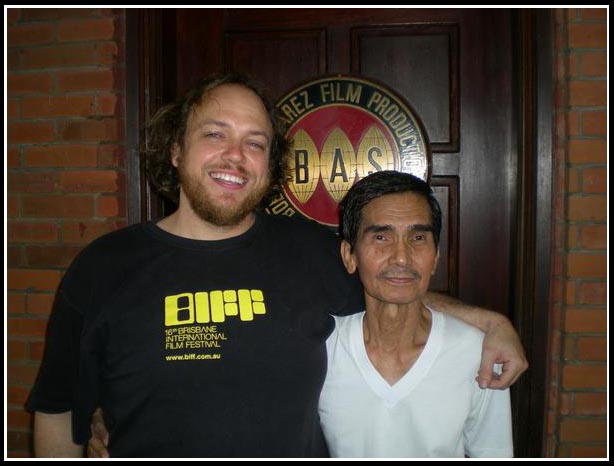 Andrew and Bobby at the Suarez residence in Bulacan - January 2008
Australian filmmaker Andrew Leavold, a huge fan of Pinoy cinema, just relayed this sad news that Bobby A. Suarez (b. 1942) passed away last February 7 due to cardiac arrest. He was 67. Suarez was in and out of the hospital due to his heart condition. He also underwent a kidney operation. 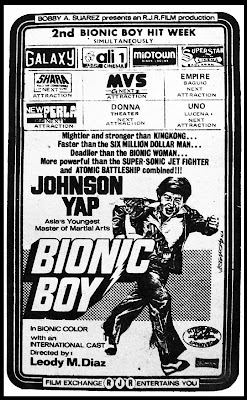 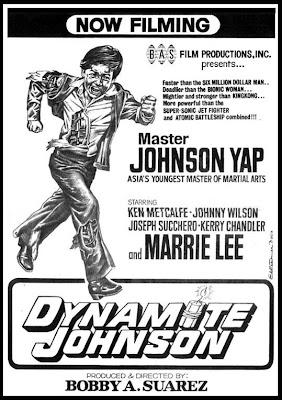 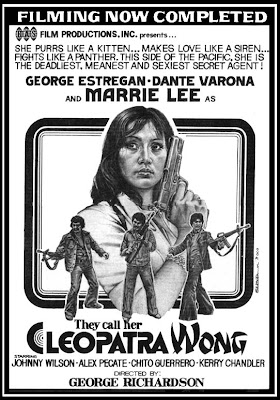 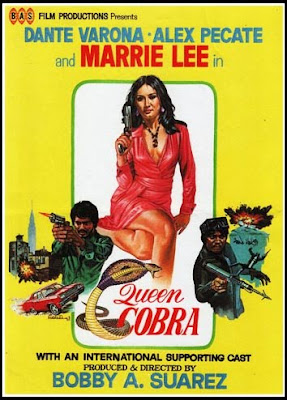