Two big names in Philippine cinema, Fernando Poe, Jr. and Joseph 'Erap' Estrada, teamed up for this big movie in 1973, Ang Agila at ang Araw, an entry to the 8th Manila Film Festival. This was the featured movie in today's FPJ Retrospective at Skycable Cinema One, replacing Angkan ng Matatapang, the original scheduled featured movie. This was the first directorial job of FPJ under the name of Ronwaldo Reyes. FPJ played the role of Dr. Araw, a rural doctor accused of a false crime and Erap as Agila, a dissident also wanted by law. It's the battle of two giants! Watch the replay on January 18, Friday, 9 am. 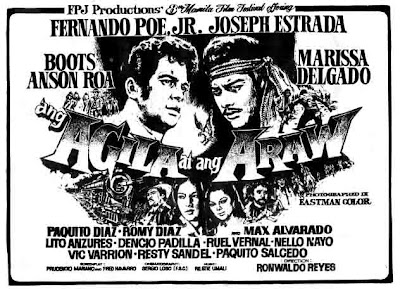 Great, thanks for the info! I just found out just this Tuesday that old FPJ films are shown on Cinemaone! I didn't see the2 2 movies shown on MOnday and Tuesday. But I was able to record Ang Daigdig Ko'y Ikaw, Bontoc and Ang Agila at ang Araw on DVD! I also have a couple of dvd's that I recorded also from Cinemaone from last year. Also have a lot that are sold in stores there in the Philippines. I am here now in California.

Hi Marvs13-- The movies shown Monday and Tuesday will have a replay this week also at Cinema One. See the sked at my post.

Hi Neto-- Ang Agila at ang Araw will have a replay this week at Cinema One (see Sked). You can have it record or tape. Thanks!