Its UE's Robert Jaworski vs. UST's Danilo Florencio in the 1965 UAAP basketball finals. The two great basketball warriors later figured in many unforgettable cage wars in the amateur league (MICAA) and the professional league (PBA) in the 6os and 70s. 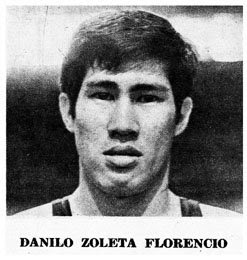 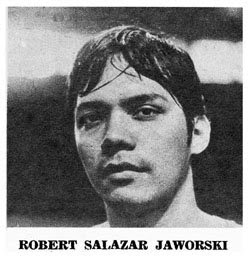 THE UE-UST RUBBER MATCH:
A CLASSIC OF A CAGE CHAMPIONSHIP

The best of three games for the 1965 UAAP basketball diadem went to the University of the East, but the hero of the third and decisive match came from the losing team. He was Danilo Florencio, a 19-year old UST forward, whom nobody could stop that night--- except the referees. And when Coach Caloy Loyzaga’s prized rookie fouled out in the closing minute after a spectacular 40-point performance, UST’s retention bid for crown crumbled under the terrific pressure put on by the mighty UE warriors. 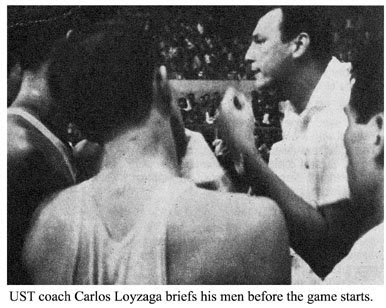 Although spotty officiating hurt the Goldies more than it did the Warriors--- only one of the UST first stringers survived the game--- UE could not be denied its hard-earned victory. But for Florencio’s superb showing, Chief Warrior Robert Jaworski was the outstanding star of the evening, grabbing those rebounds like nobody’s business and scattering 29 precious points, the last two of which came off Florencio’s fifth and costly foul and tied the score at 84-all, with 10 seconds to go. At this stage, UST was a badly crippled lot, and Loyzaga had to scrape the bottom of a shallow bench; the reserves he sent in to face a still intact UE first team fell apart with a series of boners which enabled the Warriors to pull two sensational steals and put in four points to clinch the thrill-chocked contest. 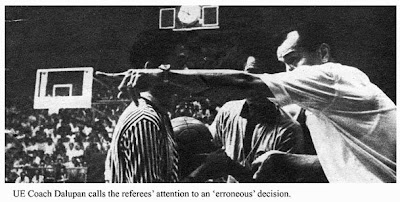 The ending reminded fans of UST’s triumph in the first of the three-game championship series last Oct. 31, when Florencio made two lightning interceptions in the last few seconds to give his team a hairline 69-67 victory. The Warriors evened matters in the second game, 72-65, by blanking George Lizares, one of UST’s chief gunners. And Florencio was not so hot that time, making only 17 points, most of which came rather too late to check a determined UE crew.

Ironically, that night Florencio was at his hottest--- the entire UE team practically ganged up on him, to no avail--- UST lost the title and made Florencio the most frustrated hero in the history of UAAP cage competitions. 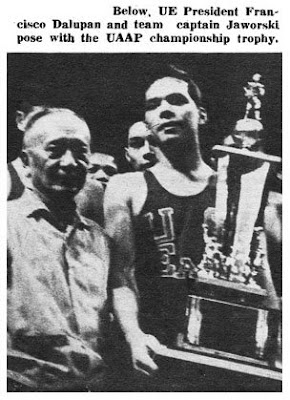 Thanks! Do you have the boxscore for this game?