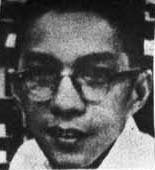 In 1961, Manila Times reporter Rodolfo 'Rod' Reyes went undercover to document the notorious dope den in Malabon. He disguised himself as a heroin user, penetrated the den and mingled with hoods, thieves, drug users and all kind of unsavory and infamous characters in the area. Reyes recounted his experiences and ordeals --- here's part of his account from the front pages of The Manila Times:

HOODS, THIEVES INFEST DOPE DEN; STOLEN GOODS EXCHANGED FOR HEROIN
"The owner of the house, incidentally, is a barber. He had the ground floor of his house rented to the dope syndicate for Php3.00 a day. The den had been transferred to the barber’s house only the week before to escape detection. The den is actually mobile, shifting from one place to another, but within the vicinity of the same barrio in Malabon.
While Mike was giving Juaning a haircut, I blasted my joint (meaning, inhaled the smoke of my heroin-treated cigarette) inside the den. I slumped on the wooden bunk. Some of the addicts and bouncers inside struck up conversation with me. Their first question was always “How long have you had the vice?” I told them that I had been smoking heroin for less than a year. One suggested that I take the drug by injection. He said that I would feel better and stronger if I took it through the mainline. I could see their arms pock-marked with needle scars. I pointed to their scars and I told them that my parents would be up I arms if they saw the scars on my arms. Well, they say, you can have a skin puff, or an intra-muscular injection. Still, I said, I was scared of injection. They let me alone afterwards when I pretended to look very sleepy from the effects of the drug.

All the while, I was listening and half-opening my eyes. From their conversations, I learned that all the hangers-on at the den were either ex-convicts or men in hiding wanted for some offense or another. One was flashing a warrant for his arrest for serious physical injuries. Another recalled how he allowed himself to be “used” in an abnormal sex act inside Muntinglupa. Still another recounted how he was nabbed for vagrancy at the .

I learned that the place was not only a dope den, but a thieves’ hideout. The young addicts stole, snatched, picked pockets, and robbed people just to satisfy their craving for dope. Many are members of the notorious “Bahala Na” Gang. There were other things I learned as I sat sleepy-eyed inside the damp den. I found out that to camouflage their drunken appearance, the dope addicts drink beer--- but not more than a bottle--- to give them alcoholic breath, (heroin and alcohol don’t mix. Anyone who takes both at the same time blacks out)."

Two days later, with proper planning, coordination and upon the signal of Reyes, the NBI raided the place. 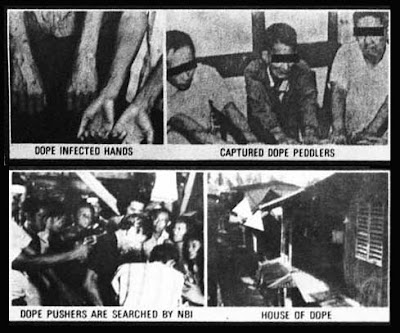 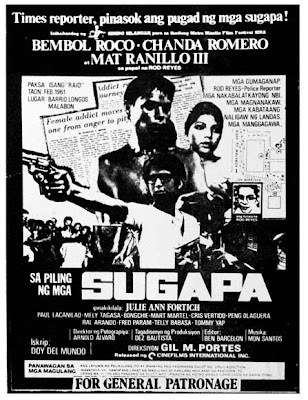 Reading the exploits of Rod Reyes inspired me to become a journalist. Later, I worked under him at ABS-CBN News, in the years before Martial Law, with Maritga Manuel, Jorge Arago, Sylvia Mayuga, Krip Yuson, Tony Seva, Boo Chanco, Orly Mercado and many other broadcast journalism pioneers. A wonderful man, humble and always generous with his time.