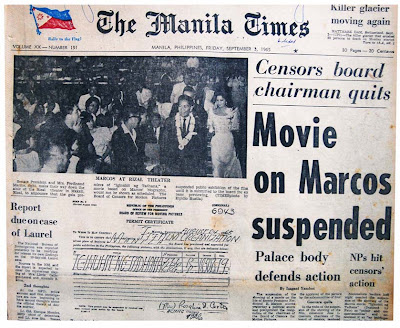 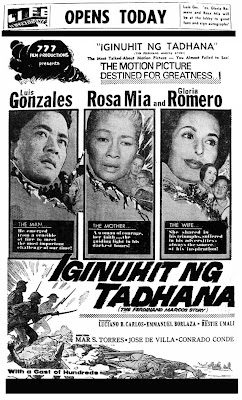 The suspension of the showing of a movie on the life of Senate President Ferdinand E. Marcos stirred yesterday a political storm and precipitated the resignation of the chairman of the Board of Censors for Motion Pictures. Officials of the board said that the board voted to suspend the exhibition of the movie, “Iginuhit ng Tadhana” (Destined by Fate) because its producer failed to submit it for preview by the board en banc or by the entire board.

The film had been approved for showing by a subcommittee of four headed by Mrs. Rosalina I. Castro last August 24. The board said it interpreted the refusal of the movie company, the 777 Film Productions, to comply with its order as defiance of the Board. The order of the board also suspends the showing of the movie in eight provinces and cities--- Camarines Norte, Batangas, , Pampanga, Cotabato, Aklan, , and Sulu. The film has been showing in theaters in these places since Aug. 24, the date of the approval of the picture by the subcommittee of four.

In the wake of the suspension of the showing of the film, columnist Jose L. Guevarra, chairman of the board of censors, tendered his resignation. Guevarra did not state his reason for resigning in his letter to President Macapagal, but sources close to him said that the resolution of suspension, which was adopted in his absence, had something to do with it.

Nacionalista leaders last night assailed the suspension of the showing of the Marcos movie, “Iginuhit ng Tadhana” (Destined by Fate) as “unfair and unsportsmanlike” and denounced it as an infringement on the freedom of expression.” The order of the Board of Censors for Motion Pictures caused the postponement of a press preview of the movie at 2 p.m. and the gala premiere at 8 p.m. yesterday, both scheduled at the Rizal Theater in , Rizal.

Senate President Ferdinand E. Marcos, NP Presidential candidate and the subject of the movie, apologized to the gala premiere audience at the Rizal Theater for the inconvenience caused them. Marcos appeared before the audience briefly with his wife, Mrs. Imelda Romualdez-Marcos and his running mate, Senate President Pro-tempore Fernando Lopez. 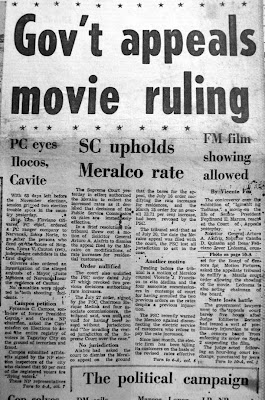 The movie film showing was later allowed but the damage caused by its suspension had caused tremendous dent on the political campaign of President Macapagal. 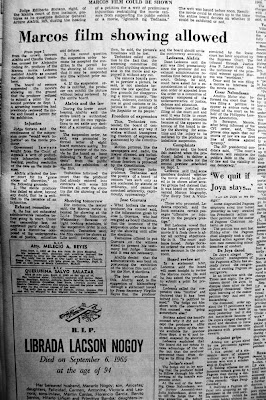 Classic Filipino movie inspired from a true story of Ferdinand Marcos president of the Philippines for twenty years(1965-86) Luis Gonzales and Gloria Romero stars as the presidential couple Ferdinand and Imelda a remake film in 2014 a new role will be played by Paulo Avelino
and Shaina Magdayao as Ferdinand and Imelda Marcos filming is underway by Star Cinema
to be filmed in Batangas Laguna
Rizal Pangasinan Baguio Ilocos Sur La Union Manila and other places to be shooting by early spring 2014 soon.Thanks for the information.From:Wayne

Piolo Pascual he will play as Ferdinand Marcos and Bea Alonzo as First Lady Imelda Marcos and Tessie Tomas as Dona Josefa Edralin Marcos to be film a new historic biopic story and a remake of 1965 drama inspired by Luis Gonzales and Gloria Romero and sequel to 1965 film Binuklod ng Langit filming is underway by early spring of 2015 next year by ABS-CBN/Star Cinema coming soon.Thanks! From:Wayne