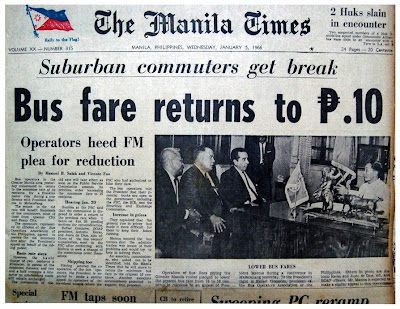 This was the headline news in 1966. Bus operators in the Greater Manila area, after heeding the request of President Marcos, volunteered to return to the minimum rate of 10 centavos for the a five-kilometer ride. The return to the old rate benefit thousands of bus commuters, most of them from Quezon City and Pasay City. That's right ! I used to pay, VILFRAN,FRED LINER, BELFAST, DM buses from Frisco Q.C. to UST , 10 centavos fare, everyday coomuting, at wala pang traffic. Umaalis ako sa bahay, quarter to one sa hapon, abot ako sa class na one o' clock. Those were the days. But then life was relatively easy noon. The population was around 40-45 million ( compare it to 90 million now). Pacosta and Magnolia chocolait were just 25 centavos, and so with ham & cheese sandwich at the UST Coop. Coke, RC Cola, Canada Dry, 7Up, Royal Tru Orange were just 10 centavos, BIRELEYS Chocolate was 15 centavos. A movie ticket was 85 centavos at orchestra in second run theaters and 1.20 in First run theaters. Komiks was 25 centavos.

I was born in Jan 1966 in Manila.. Glad to see read this post and its comments but sad how everything turned out 42 years later.