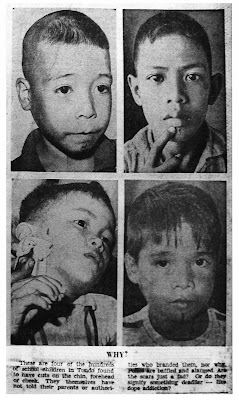 The Victims
I was in my grade school when news came out in newspapers about the case of children with scars perpetrated allegedly by a gang of extortionists or young hoodlums. Authorities were puzzled, baffled and clueless during their initial investigation. Fear suddenly engulfed the whole metropolis. I was terrified going home alone from school with the thought of being ganged up, molested and being inflicted with bladed weapons. 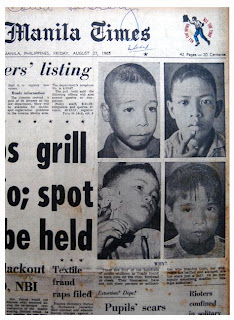 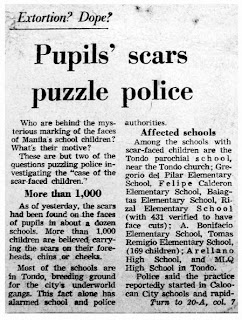 Who are behind the mysterious marking of the faces of ’s school children? What’s their motive? These are but two of the questions puzzling police investigating the “case of the scar-faced children.”

As of yesterday, the scars had been found on the faces of pupils in about a dozen schools. More than 1,000 children are believed carrying the scars on their foreheads, chins or cheeks. Most of the schools are in Tondo, breeding ground for the city’s underground gangs. This fact alone has alarmed school and police authorities.

Police said the practice reportedly started in schools and rapidly spread to Tondo. Among the theories police are working on:

Police yesterday arrested two teenage suspects but both refused to talk. Caught in a brief chase near the on Quiricada st., Tondo, were Benjamin Llaguna, 17, a Sigue-Sigue Sputnik gang member, of 1478 Bambang st., Sta. Cruz, and Francisco Payumo, 16, of 1462 Alvarez st., Sta. Cruz. They were positively identified by their victim, Mauro Morales, 8, first grader at the school, as the ones who slashed his cheek with a blade. Mauro, son of an ailing jobless man, Ricardo Morales, of 2153 Kusang-Loob, said the two teenagers, with a girl, dragged him to an empty classroom shortly after noon yesterday. He said the three offered him candy and when he refused, Payumo held him by the head while Llaguna slashed his right cheek. He said they did not tell him why they branded him. Mauro’s screams attracted other children, who summoned a passing police prowl car. Patrolman C. Banzon chased the three youths and collared Payumo and Llaguna. Their girl companion fled. Police found a blade on Llaguna. Payumo yielded a bottle of acetone. Investigators said the suspects applied the chemical on the wounds of their victims. Mauro said the three pounced on him when he was left behind by his classmates while they were on their way home from school. Police believed that the three had been preying on the school children and that Mauro was just one of their many victims.

According to most of the victims, they became dizzy after they had been slashed. This led police to suspect that the markings may be the work of dope pushers. One of the girls, Andrea de la Cruz, a fifth grader at Gregorio del Pilar Elementary School on J. Abad Santos ave., Tondo, said a teenage boy stabbed her with a sharp needle in the left leg while she was getting off a jeepney in front of her school at noon last Wednesday, Aug.25. A few hours after the incident, she said she nearly fainted.

Another fifth grader, Rolando Estrella, said two boys pounced on him last Tuesday while he was on his way home from the Remigio Elementary School on Perla st., Tondo. He said the boys held him, gave him candy, and cut him in the forehead. Shortly after, he said, he felt dizzy. Sixteen children at the Del Pilar School made the same complaint. Teachers there said four of the scar-faced children got infected.

Many of those interviewed said the cuts were inflicted with bladed instruments or broken glass. Others said their tormentors used only wet cotton--- probably soaked in acid, police said--- which they rubbed on their victim’s chins or foreheads. A few minutes after the skin dries up, the victims said, it starts itching, blisters appear, and scars are formed. Some of them told investigators that their tormentors blind-folded them. There were boys who admitted having inflicted the cuts on themselves. Some said this was due to a rumor that those who had scars would not be molested by a gang of young hoodlums. Others said these were marks of membership in a exclusive karate club. Still another reason given was that it was only a fad in school.

Orlando Paloma, 13, first year student at the on Molave st., Tondo, said he and his gang mates only imitated what they saw in the movie, “The 7 Faces of Dr. Ivan.” 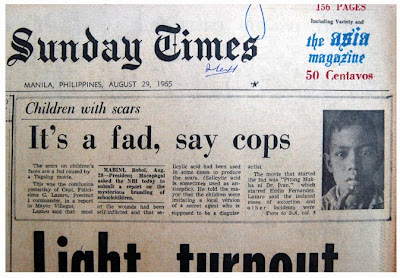 The scars on children’s faces are a fad caused by a Tagalog movie. This was the conclusion yesterday of Capt. Felicisimo G. Lazaro, Precinct 1 commander, in a report to Mayor Antonio Villegas. Lazaro said that most of the wounds had been self inflicted and that salicylic acid had been used in some cases to produce the scars. (Salicylic acid is sometimes used as antiseptic). He told the mayor that the children were imitating a local version of a secret agent who is supposed to be a disguise artist. The movie that started the fad was “7 Mukha ni Dr. Ivan,” which starred Eddie Fernandez. Lazaro said the isolated cases of extortion and other incidents were caused by young hoodlums taking advantage of the situation. 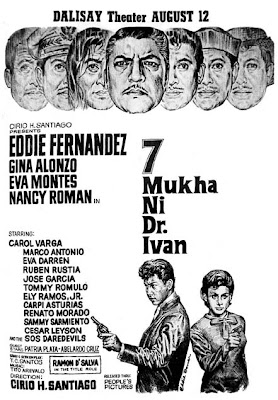 I wonder where these kids are now as adults? :)

I remember this scare! I was attending Mapua High School then in the afternoon session, and before getting on a jeepney I'd first scan the passengers' faces. Should anyone appear suspicious, I'd wait for another jeepney ... hehehe.