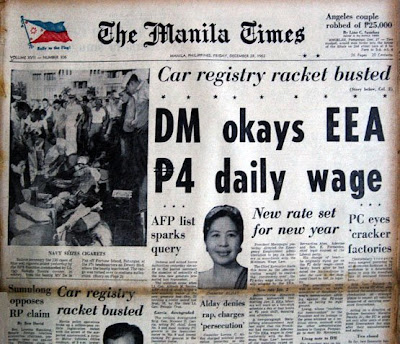 December 28, 1962 --- President Diosdado Macapagal yesterday directed the Emergency Employment Administration to pay its laborers in accordance with the Minimum Wage Law. The Chief Executive made this move as the administration sought to resolve the controversy over the 2 pesos-a-day wage scale originally adopted by the EEA.Administrator Eleuterio Adevoso announced that starting Jan.2, EEA laborers will work on a two-shift schedule a day at four hours at 2 pesos each shift, morning and afternoon.

--Jumping the gun on the wage board in Metro Manila, President Gloria Macapagal-Arroyo excitedly announced Friday before employers that the tripartite body had approved a P20 increase in the daily minimum wage of private workers, or P600 per month, to allow them to cope with soaring fuel and food prices.

The President also said the wage board in (Region X) had agreed on a P16 increase or "part of the integrated minimum wage," plus a P22 raise in cost-of-living allowance (Cola).

Ms Arroyo said the new adjustment would raise the daily minimum wage in the NCR to P382. But she said the board had yet to determine whether the P20 would be an outright increase in the minimum wage, or P15 for the wage plus P5 in additional Cola.

Workers have frowned on increasing the Cola instead of wages since the allowance is not considered in computing for bonuses, separation pay, longevity and other benefits.