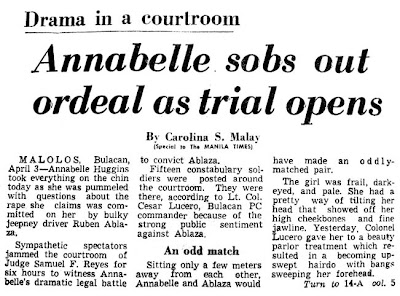 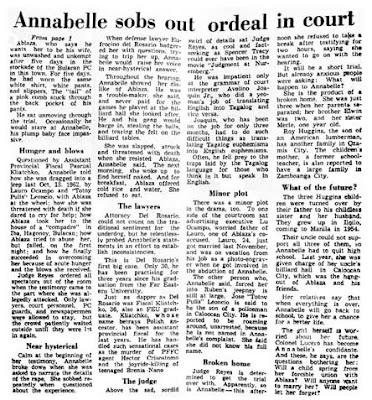 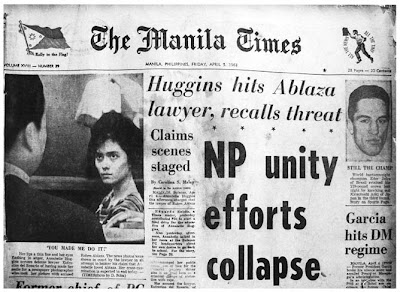 Malolos, Bulacan, April 3--- Annabelle Huggins took everything on the chin today as she was pummeled with questions about the rape she claims was committed on her by bulky jeepney driver Ruben Ablaza. Sympathetic spectators jammed the courtroom of Judge Samuel F. Reyes for six hours to witness Annabelle’s dramatic legal battle to convict Ablaza. Fifteen constabulary soldiers were posted around the courtroom. They were there, according to Lt. Col. Cesar Lucero, Bulacan PC commander because of the strong public sentiment against Ablaza.

Sitting only a few meters away from each other, Annabelle and Ablaza would made an oddly-matched pair. The girl was frail, dark-eyed, and pale. She had a pretty 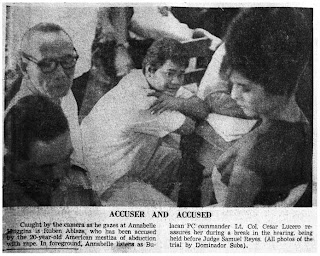 way of tilting her head that showed off her high cheekbones and fine jawline. Yesterday, Colonel Lucero gave her to a beauty parlor treatment which resulted in a becoming upswept hairdo with bangs sweeping her forehead. Ablaza who says he wants her to be his wife was unwashed and unkempt after five days in the stockade of the Bulacan PC in this town. For five days, he had worn the same white shirt, white pants, and slippers. The “tail” of a pink comb stuck through the back pocket of his pants. He sat unmoving through the trial. Occasionally he would stare at Annabelle, his plump baby face impassive.

Questioned by Assistant Provincial Fiscal Pascual Kliatchko, Annabelle told how he was dragged into a jeep last Oct. 23,1962 by Lauro Ocampo and “Totoy pulis” Leoncio, with Ablaza at the wheel; how she was threatened with death if she dared to cry for help; how Ablaza took her to the house of a “compadre” in Iba, Hagonoy, Bulacan; how Ablaza tried to abuse her, but failed, on the first night; and how he finally succeeded in overcoming her because of acute hunger and the blows she received. Jugde Reyes ordered all spectators out of the room when the testimony came to the part where she was allegedly attacked. Only lawyers, court personnel, PC guards, and newspapermen were allowed to stay, but the crowd patiently waited outside until they were let in again.

Calm at the beginning of her testimony, Annabelle broke down when she was asked 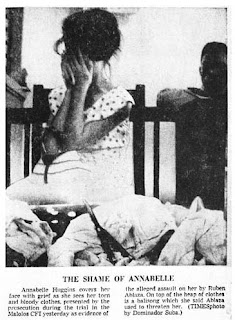 to narrate the details of the rape. She sobbed repeatedly when questioned about the experience. When defense lawyer Eufrocino Del Rosario badgered her with questions, trying to trip her up, Annabelle would raise her voice in near-hysterical answer. Throughout the hearing, Annabelle showed her dislike of Ablaza. He was a trouble-maker, she said, and never paid for the games he played at the billiard hall she looked after. He and his gang would barge in, stealing the balls, and tearing the felt on the billiard tables. She was slapped, struck and threatened with death when she resisted Ablaza, Annabelle said. The next morning, she woke up to find herself naked. And for breakfast, Ablaza offered cold rice and water. She refused to eat.

could not count on the traditional sentiment for the underdog, but he relentlessly probed Annabelle’s statements in an effort to establish inconsistencies. This is Del Rosario’s first big case. Only 30, he has been practicing for three years since his graduation from the Far Eastern University. Just as dapper s Del Rosario was Fiscal Kliatchko , whose name betrays Polish ancestor, has been assistant provincial fiscal for the last years. He has handled such sensational cases as the murder of agent Hector Crisostomo and the joyride-killing of teenage Brenia Nano.

Above the sad, sordid swirl of details sat Judge Reyes, as cool and fact-seeking as Spencer Tracy could ever have been in the movie “Judgment of Nuremberg.” He was impatient only at the grammar of court interpreter Avelino Joaquin Jr., who did a yeoman’s job of translating English into Tagalog and vise versa. Joaquin, who has been on the job for only three months, had to do such difficult things as translating Tagalog euphemisms into English euphemisms. Often, he fell prey to the traps laid by the Tagalog language for those who think in it but speak in English.

There was a minor plot in the drama, too. To one side of the courtroom sat advertising executive Lu Ocampo, worried father of Lauro, one of Ablaza’s co-accused. Lauro, 24, just got married last November, and was on a vacation from his job as a photo-engraver when he got involved in the abduction of Annabelle. The other person who, Annabelle said, forced her into Ruben’s jeepney is still at large. Jose “Totoy Pulis” Leoncio is said to be the son of a policeman in . He is reported to be roaming around, unarrested, because he is not named in Annabelle’s complaint. She said she did not know his full name.

Judge Reyes is determined to get the trial over with. Apparently, so is Annabelle--- this afternoon she refused to take a break after testifying for two hours, saying she wanted to go on with the hearing. It will be a short trial. But already anxious people were asking: What will happen to Annabelle? She is the product of a broken home. She was just three when her parents separated; her brother Elwin was two, and her sister Merle, one year old. The father, Roy Huggins, the son of an American lumberman, has another family in . The children’s mother, a former schoolteacher, is also reported to have a large family in .

What of the future?

The three Huggins children were turned over by their father to his childless sister and her husband. They grew up in , coming to in 1954. Their uncle could not support all three of them, so Annabelle had to quit high school. Last year, she was given charge of her uncle’s billiard hall in , which was the hangout of Ablaza and his friends. Her relatives say that when everything is over, Annabelle will go back to school, to give her a chance for a better life. The girl herself is worried about her future. Colonel Lucero has become Annabelle confidante. And these, he says, are the questions bothering her: Will a child spring from her forcible union with Ablaza? Will anyone want to marry her? Will people let her forget?

See CFI Decision and Supreme Court Affirmation of the case
and Annabelle Huggins as a movie star
Posted by Video 48 at 9:00:00 AM

It's incredible to see how biased the whole situation was against Annabelle (women in general). I saw the movie "Doorway to Hell," she was great. Too bad - who knows what happened to her.

Nothing abt what the criminal did is inspiring. He did not love her. How could he do such a heinous act to her if he did? Sarili nya lang mahal nya. Tapos after everything, during the trial he has the balls pa to deny? Asswipe.

is she still alive? that wasn't how the story end.. she died in the story of her own life..

hanggang Hindi nya pagsisihan any kasalanan ng lalaki n iyon before xa namatay...... Malamang sa malamang pinagbabayaran nya into as apoy na walang hanggan..... Tsaka abduction at rape its not love.dapat kusa.... Not only he ruined her life once but many times..... I also dispise his parents ..... To that lawyer and force signing of marriage contract..... Such abuse of technicalities.... Sa mga nakakainspire ? To ruin lives and abuse your will? Take a good look to yourself baka maging rapist kayo....... Sana bumalik and death penalty not for those normal and God feared person but to those who are sons of Satan's..... At pls read Koran bible to those who are convince n nakakainspire daw

What the hell is wrong with these people? Bakit kay ablaza ang simpatya? Mga siraulo!
Kung mahal mo ang isang tao, hndi mo kayang saktan at pwersahin ito!
At sa earlier statement ni huggins, ung manggugulo sila sa billiard hall, sisirain ang felt table, magnanakaw ng billiard balls show a hint of ablazas bad behavior.
30 yrs in prison is not enough! He shud have lifetime imprisonment, and his soul should b rotten in hell.
No any woman or person should be treated any violence except criminals who deserve it

it's a good story but it so sad Annabelle Huggins died. At last she got a justice. RUBEN ABLAZA YOUVE GOT WHAT YOU DESERVE!!!