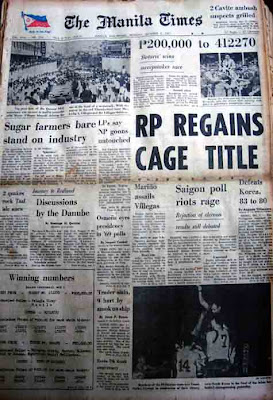 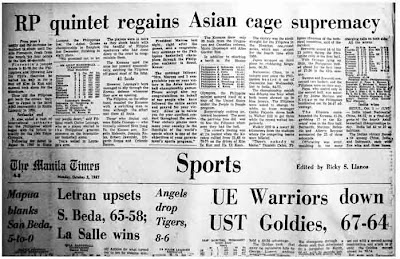 The RP National Basketball teams won the ABC (Asian Basketball Championship) five times in 1960, 1963, 1967, 1973 and 1986. It also won the Asian Games Gold four times in 1951, 1954, 1958 and 1962 during the reign and time of Carlos 'The Big Difference' Loyzaga. The best finish by a Philippine Team and any Asian Team in the World Championships is a Bronze Medal in 1954. Up to this time, no Asian nation has ever surpass this until the present time.

, Oct.1 --- The regained the Asian basketball championship tonight with an uphill 83-80 victory over before 12,000 partisan spectators. Six Filipino players fouled out in the last quarter of a harrowing game in which the fell behind, 11-2, in the first three minutes. Narciso Bernardo led the Filipinos out of that jam to a 41-38 halftime lead. And as Adriano Papa caught fire and pumped in 12 points in a five-minute stretch in the third quarter, they stormed out front, 58-47. But the rugged, spirited Koreans did not give up so easily and the outcome remained in doubt until Danilo Florencio, fresh from the bench, hit four points in the last 48 seconds. Thus did the Filipinos get back the crown they lost to in the third ABC tournament in in 1965.

It also ended a rash of international setbacks for the which began with its failure to qualify for the 1964 Tokyo Olympics. Following the defeat to in 1965 in , the lost the Asian Games championship in last December, finishing in sixth place. “We promised not to let our people down,” said Filipino coach Carlos Loyzaga, who was as a player starred in the ’ greatest moments on the international basketball scene. Tears welled in Loyzaga’s eyes. The players were in tears as they shook hands with the handful of Filipino spectators who had come down to the court to congratulate them.

The Koreans used the zone but pressed spasmodically, catching the Filipinos off-guard most of the time. However, Loyzaga’s boys managed to slip through the Korean defense whenever they saw an opening. The Filipinos, on the other hand, muzzled the Koreans with a switching man to man, although the effort cost them 41 fouls. Those who fouled out were Eddie Ocampo--- who virtually silenced Shin Dong Pa, the Korean ace; Rogelio Melencio, Joaquin Rojas, Robert Jaworski, Edgardo Roque and Orlando Bauzon. The Koreans drew only 30 fouls from the Uruguyan and Canadian referees, Mario Hopenayn and Allen Gordon Rae.

In addition to clinching a berth in the Mexico Olympics, the Philippine quintet assured itself of a tour of the under the People to People program.Surprisingly nothing untoward happened. The most the partisan fans did was to boo the Filipinos whenever they had the ball. The crowd’s jeering was at its loudest when the Koreans rallied from 73-65 to 79-79 on the drives of Kim In Kun and Ha Ui Keon.

The victory was the ninth straight for the Filipinos in the 10-nation, one-round series, which was staged for the fourth time since 1960. wrapped up third place by clobbering , 90-55.

Bernardo scored 16 of his 23 points during the Philippine rally in the first half. With Ocampo tying up Shin, the inched ahead for the first time at 27-26 in the 12th minute. Bauzon and Jaworski connected two baskets and the Filipinos were on their way. Papa, who sizzled only in the second half, was assisted by Jaime Mariano and Roque as the hammered out its 58-47 advantage. The Filipinos outrebounded the Koreans, 41-24, grabbing 17 to Koreans’ nine in the first half. Bernardo, Mariano, Melencio and Alberto Reynoso accounted for 23 of those rebounds. Officiating was strict, resulting in too many charging calls on both sides. 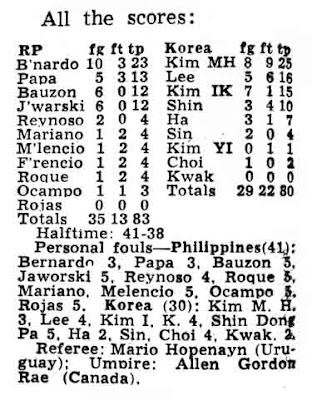 This is amazing, how about the 1973 and 1986 ABC championships, im looking for that article along with our triumph over USA in the 1985 Jones Cup.