Dyesebel, another Mars Ravelo creation, was first serialized in Pilipino Komiks in 1952-53, and was later adapted into the big screen that same year. The movie topbilled Jaime de La Rosa as Fredo and Edna Luna as Dyesebel. The movie produced under Manuel Vistan Productions, Inc. and released thru Premiere Productions, was directed by the great Gerardo 'Gerry' De Leon. 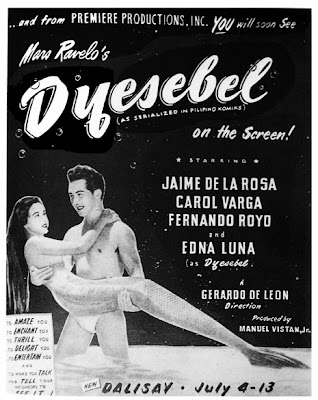 In the , the story of Dyesebel was narrated as a character born to a mermaid-obsessed Filipino mother. The mother, due to her obsession with looking at calendar pictures of mermaids, eventually gave birth to a female infant with a fishtail instead of normal human lower extremities. The angered father wished to abandon the abnormal child but was hindered from doing so when he was struck by lightning during a typhoon. To avoid the stigma of having a mermaid child, the couple decided to leave their village. The child was kept hidden from the sight of new neighbors. The mermaid eventually met other mermaids while spending time at the seashore. Her adventures at sea brought her into contact with Diangga, a sea-witch who had the power to transform sea-creatures like Dyesebel into normal humans. Dyesebel fell in love with a normal human man. But her secret of being a mermaid, prompted the jealous former girlfriend of the man with whom Dyesebel was in love, to kidnap Dyesebel and place her in a carnival. Dyesebel was later saved by her human lover. Diangga, the sea-witch, eventually transformed Dyesebel into a permanent female human with normal lower extremities.

For more on Dyesebel, visit http://www.marsravelodarna.com/id35.html
More on Mars Ravelo 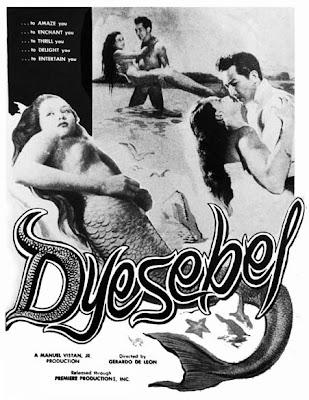 I have a blog on hot international gossips
. Please give me comments........

Hi! Producer and director Manuel Vistan Jr. (a.k.a. Enrico Pimentel the actor) was my grandfather. I was 12 when he passed away but I was his favorite apo and I loved him dearly.

Unfortunately, My mom did not keep any of his movie memorabilia, which is why I was extremely delighted to see some of his movie posters in your blog. Is there any way I could have copies of his stuff? Do you have any more info on his movie career? I would very much appreciate knowing more about his past movies and maybe have something tangible to show my son whom I named after him.

Thank you very much!

Hello po. :)
Pwede po bang pagamit ng info at pictures ninyo dito sa blog niyo? Gagamitin ko po siya sa presentation sa school. Rest assured po, I will not take credit on this. I shall properly cite your blog as one of my sources. :)
Thank you in advance po. :)

She is the mermaid princess & heroine/protagonist inspired from the novel by Mars Ravelo turned into films television & comics/manga in Philippine history.Thanks!
From:Wayne

She is the original role who portrayed as the mermaid princess is Edna Luna in 1952 fantasy film Dyesebel a classic Filipino story created by the late novelist Mars Ravelo serialized in comics & television series. Thanks! From:Wayne
waynemoises@gmail.com