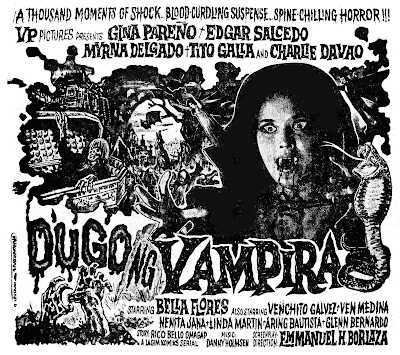 
A blend of wit and humor characterized the horror movies of the 60s. 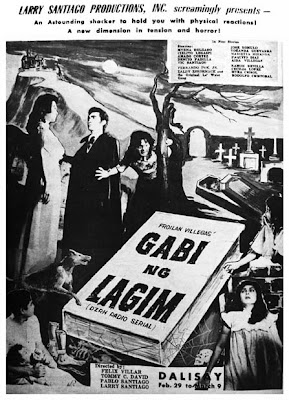 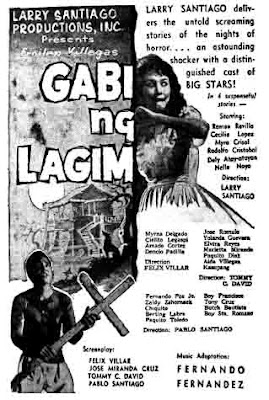 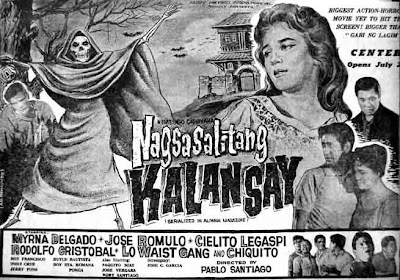 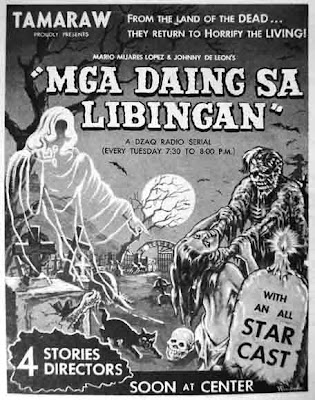 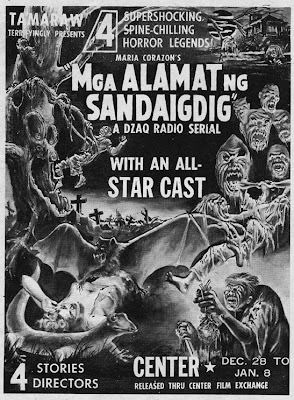 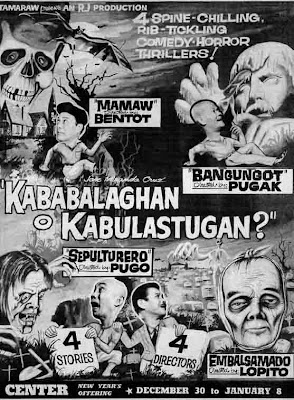 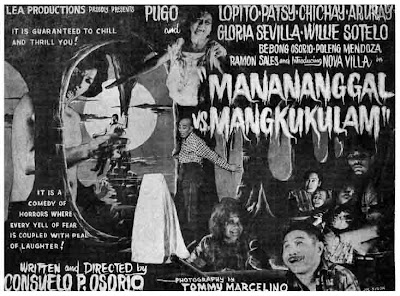 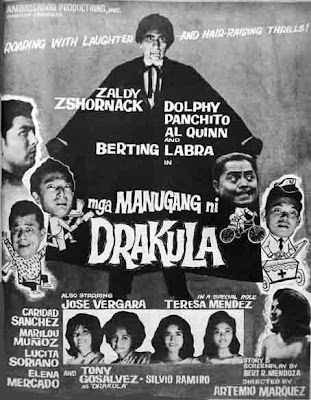 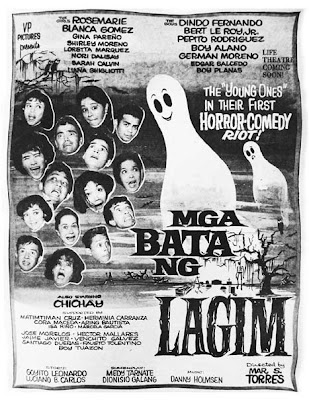 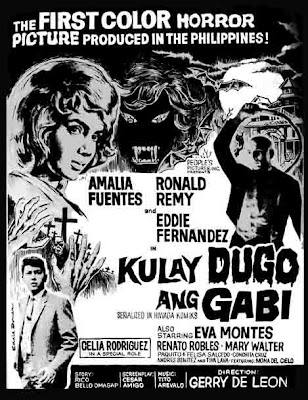 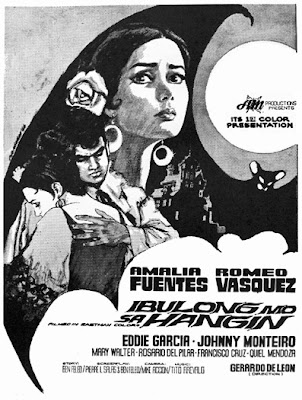 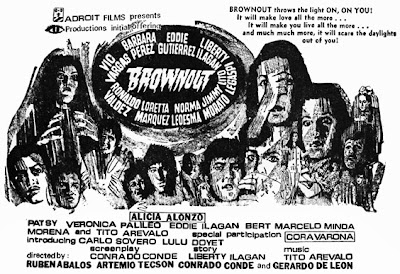 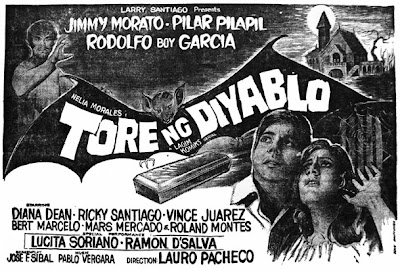 hello,is it possible that we can buy horror/action movies of the 60's? is it expensive? please tell us how to buy it..Thank you...

Hi Vince! I think Dugo ng Vampira is available online (c/o Sampaguita); Ibulong sa Hangin (aka Blood of the Vampires) and Kulay Dugo ang Gabi (aka Blood Drinkers)are also available online (Amazon); while Gabi ng Lagim can be purchased locally in all Astroplus outlets.I'm not sure of the rest of the titles. Thanks!

Thanks a lot for these wonderful horror ads. It's a tragedy that so many Filipino movies seem "lost" - or at least unavailable. "Gabi ng Lagim" can be purchased, as written by a previous post, but unexplainably the VCD only contains 3 stories, not 4 as in the original release. What happened ?
Incidentally, do you have a movie ad for Rolf Bayer's TAGANI, circa 1965 ? it was the movie later "cannibalized" in the USA by Al Adamson for his awful "Horror of the Blood Monsters". The extracts from TAGANI was MUCH better than the rest of the film !!!

Hi todslaughter! Yes, you're right. One episode starring Ramon Revilla Sr. was missing--- another lost treasure. In regards to Tagani poster, i'll try looking for it. Thanks for the comment!

Hi Wesley! Yes! I've seen the two movies--- its dubbed in English. Well, it's better than nothing.
Thank you for the visit!

hi when was katotohanan or guni guni part 2 release in the 80s?

hi.. just wondering if you know the title of a classic filipino horror movie with i think has three different stories, one of which tells about a baby being left and grew up in river. At the end of the movie, the creature melted. Been trying to search for so long. Appreciate it very much if you do know.

Greetings,
Thank you for this very interesting website. I'm very interested in finding as many old Philippines horror and fantasy films as possible. I'm especially interested in the film "Manananggal Vs Mangkukulam" (1960). Is this a lost film, or does it still exist? Is anything known about this?
Which films are really KNOWN to be lost, or to be existant? Is there a way to find out? Best regards!

its a pity that there seems to be no available (or existing copy) of the film "Katotohanan o Guni-guni". There were four stories, with the usual formula of the first three being serious, and the last, a comedy/horror story. From what I recall, the segments were, Anak ni Satanas, (obviously, a monster/child), Mananananggal,with a different approach to an old theme, this time the Mananananggal turned out to be a woman long dead.Then, the real scary one, Cadena De Amor, a murdered woman returns from the dead to haunt and exact revenge on her murderer husband and his mistress. The last one, I forgot the title, but it involves a mysterious woman who offers a group of poor people a sum of money to dig up an old treasure, which turns out to be the grave of an old witch. Sayang talaga kung wala na ito. thanks a lot.

Oh my I was so excited when I found this website, I love old movies but I don't know how to find all this horror movies. I wish we can have store for the very old classics pilipino movies but I wish very affordable like the American classic movies in Amazon from tcm but just so cheap but millions of people will buying. I wish comes true. Thanks

I remember the classic Filipino film from the early 1960's era inspired from legendary paranormal monsters of Philippine mythology turned into a live action film starring Chichay Pugo and Nova Villa released by Lea Productions/Premiere Productions should to be shown on Cinema One Global Jojo De Vera and GMA Pinoy TV/Life TV soon. Thanks!
From:Wayne

Hi there,I enjoy reading through your article post, I wanted to write a little comment to support you and wish you a good continuationAll the best for all your blogging efforts.

Does anyone know the title of this Filipino ghost/suspense movie from the late 1950s or early 1960s that was shown in television in IBC 13 or the original channel 2. The basic plot is that a rich older woman matron marries a younger handsome man who is not rich. When they're already married, she begins to suspect her young husband is having an affair with a younger woman. Because she sees her husband concealing things and keeping it a cabinet hidden from her. She thinks they're for his mistress.

Then, the wife poisons her husband and makes it appear he committed suicide or I think he had an accident. After he dies, she goes through the man's cabinet to find the things he's hiding from her. She discovers the things are really gifts to surprise her on their wedding anniversary. She become's guilt-ridden and after that, her husband's ghost start haunting her.

She has relatives and friends to stay in her house so she's not alone, but only the widow sees her husband's ghost. Eventually, the ghost strangles her to death with the other people in the house seeing no ghost, but sees she is dying from unknown cause.

I don't know the names of the actor and actress who portrayed the older wife and young husband. But the actor is mestizo and looks like a young actor who's a member of the Salvador clan who was active in the 50s or 60s?