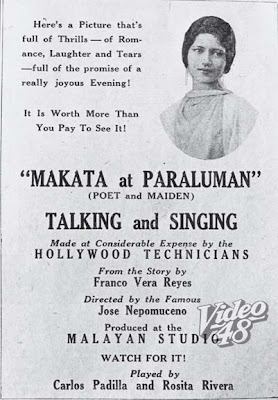 On August 3, 1929, Radio Theater presented the first talkie: Fred Waring’s Pennsylvanian Syncopation. However, this was achieved by merely synchronizing phonograph records with the film. The audience complained that the sound was faint and muffled in parts. The real sound film, however, was not long in coming. On October 12, 1929, Leon Britton, a British engineer, arrived in Manila with 35 cases of equipment and 35,000 feet of film. The next day, he presented a program of optically recorded sound films at the Lyric Theater: Rainbow Man, Steamboat Bill, The Marionettes at the Opera and A Trip to the London Zoo. Immediately after, a talkie fever swept Manila.

In order to compete with the foreign sound films, Filipino silents were dubbed live by stage actors and advertised as talkies.

Sound equipment was prohibitive by Filipino standards: it would take a few more years to import and master the technology. Despite these limitations, however, Filipino cinema took off and became the country’s most popular entertainment.

On March 4, 1930, Carlos Vander Tolosa presented his first film, Collegian Love. It is the first Filipino film to be synchronized with phonograph records. This proved to be immensely popular. By then, the competition to produce the first optically recorded talkie was underway.

Two years after Tolosa’s film, filmmakers were still grappling with the new technology. Jose Nepomuceno advertised his film, Sa Pinto ng Langit/At Heaven’s Gate, as the first talkie, but this turned out to be a false claim. A visiting Hollywood director, Arthur Thompson, announced he was shooting a sound film with Virginia Spencer, a cousin of Hollywood star Belle Bennett. A Filipino-American, Jessie Matthews, who worked with Cecile B. De Mille in Hollywood, set up Paragon Pictures. However, he only got to finish his first film, Dinukot/Kidnapped, a silent, in 1934.

The first film made in the Philippines to feature optically recorded sound was George Musser’s Ang Aswang/Vampire. In 1932, Musser imported php 50,000 worth of optical sound equipment and turned his house into a studio. He spent a year shooting the film with Charles Miller as his cinematographer and William Smith as his soundman. Despite its Tagalog title, the film was actually recorded in Spanish and English. The film opened to acclaim at the Lyric on January 1, 1933. Unfortunately, according to some observers, the sound was sometimes out of sync and inaudible.

Also in 1933, Leon Britton returned to Manila to shoot a talkie, Children of the Philippines.

In 1933, two Americans, George Harris and Eddie Tait, embarked on a plan to make Manila the film capital of Asia. Using Manila as their base, they envisioned the production of films not only for the Philippines but also for Indonesia, Malaya and China. The initial venture, a partnership with Jose Nepomuceno, was to attach a soundtrack to Nepomuceno’s half-finished film, Punyal na Ginto/The Golden Dagger. This was followed by 100 percent talkies in the vernacular: Makata at Paraluman/Poet and Maiden and Dr. Kuba/Dr. Hunchback.