Screen legend Rudy Concepcion (1912-40) was one of my favorite pre-war screen idols who had a very brief and colorful movie stint during the pre-war era. He was best remembered for his successful team-up with Rosario Moreno, another of my favorite pre-war star. Concepcion died in 1940 at age 28 due to peptic ulcer, while filming Mahal Pa Rin Kita, his fifth movie with Ms. Moreno. His last complete movie was Ikaw Rin with Elsa Oria, dubbed as the "singing sweetheart of the Philippines." 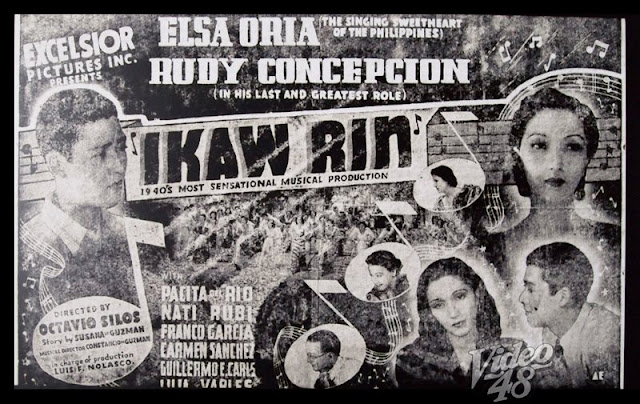 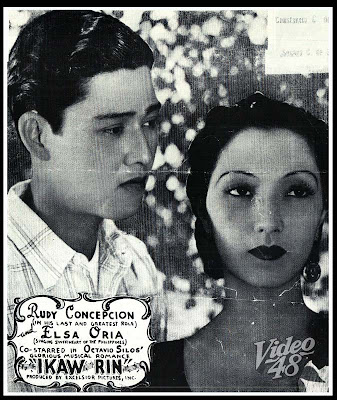 It's such a pity that these days, these conditions are treated routinely with usually no complications.

Miss Oria was one of my mother's best friends, the other one was Mrs. Asucena V. Perez. My mom and Elsa have both passed away, but I think Asucena is still living.

I haven't seen any Rudy Concepcion film. Being paired with Elsa, he must have been singing as well.

These flyers are very good research materials for anyone writing a book on Filipino movies. You don't ony get the details of the production, you also have the visuals to boot.

You can watch one of his movies in youtube, Tunay na Ina(1939) with Rosario Moreno and little Tita Duran. I believe the owner of this blog also posted an article about the movie about a year ago. You can research that in this blog. Rosario and Rudy used their own voices in singing, they were such a beautiful singing pair.

"Ikaw Rin" is a beautiful composition of Nicanor Abelardo. I'm sure Rudy and Elsa sung this beautifully in the movie. It's a pity that no more copy of this movie is known to exist and no pre war movie of Elsa Oria survived the war.

"Pakiusap" is the only surviving pre war movie that is not available in the world wide web. I remember it being shown in UP some years ago, I want to see the whole movie again and hear the songs sung in the movie; Taga Bukid and Bilin, both compositions of Miguel "Mike" Velarde Jr. and of course, the immortal "Pakiusap" by Dr. Francisco Santiago.

I was a young boy of 9 when news of Rudy Concepcion's death spread like wildfire. The rumors had it that the alleged cause of death was suicide because Rosario Moreno spurned his love for her!