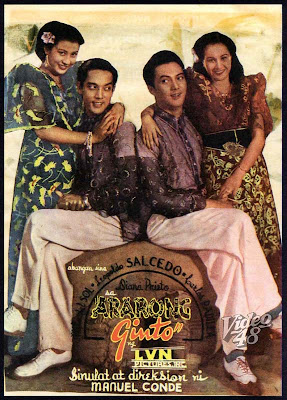 Synopsis--- The story is about the adventures of a young ambitious farmer (Leopoldo Salcedo) who hails from the city and migrates to Davao, the land of promise. Pioneering in the South, he meets a rural teacher (Mila del Sol) with whom he falls in love. Things get hot for both of them when the city gangsters invade the Southern homesteads and make all sort of trouble. Things get more complicated when the farmer if framed up as a dummy for Japanese aliens. Everything turns out all right in the end with several spectacular musical numbers and dances. In this connection, the public is advised of the unusual twist in the story--- that of the presentation of the serious message, which Conde alone could execute with such dramatic impact.
(The Tribune, August 8, 1941)

Source: The Cinema of Manuel Conde by Nicanor Tiongson

Thanks again for sharing this treasures.

Deanna Prieto's real name is Consuelo Prieto. In real life she was known as Nena Geronimo. She just passed away in August 2010.
Thank you