GINA ALAJAR AND RODERICK PAULATE: CHILD STARS OF THE 60s

Roderick Paulate was only 5 or 6 years old and Gina Alajar (Regina Alatiit in real life) only eight years old, when they auditioned for Lea Productions' Kaibigan Ko’ng So.Nino (1967), The two bested some 300 aspirants getting the two of the four important roles at stake (Gina won the role of Oreng, while Roderick got the role of Bong.

This simple newspaper ad announcing the search for four juvenile talents completely changed the life of these two young hopefuls. 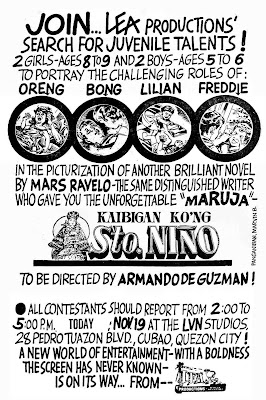 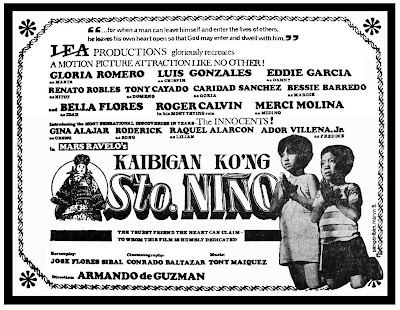 As a child performer, Gina won the Best Child Actress at the of the Movie Arts and Sciences (FAMAS) for Kaibigan Ko'ng Sto. Nino (1967) and later received a similar trophy from the Citizens' Council for Mass Media (CCMM) for Wanted:Perfect Mother (1970); Roderick Paulate, on the other hand received the 1970 FAMAS Best Child Performer in FPJ's Mga Anghel na Walang Langit (1970). 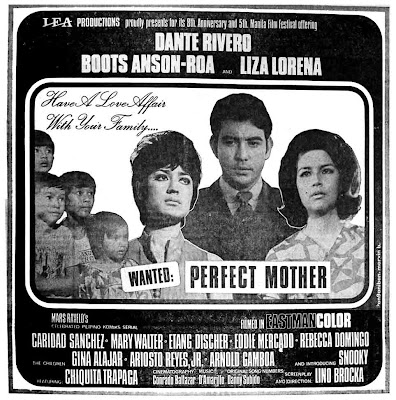 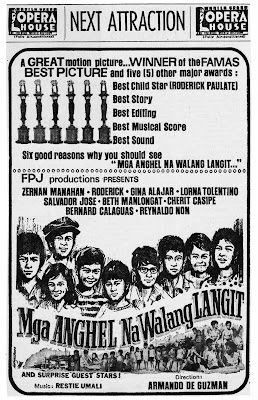 Young Lorna Tolentino and Zernan Manahan were also included in the movie. 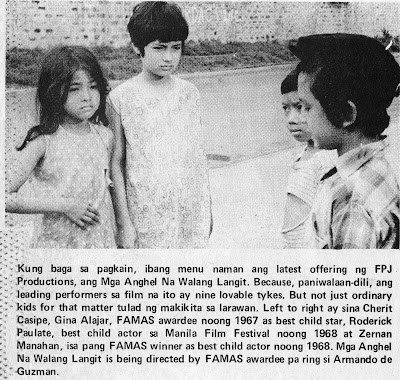 Mr Paulate is a durable actor/star. His talent and achievements cannot be replaced or copied by any actor in showbiz. He is absolutely incomparable. His intelligence, discipline and lovable persona inside and outside of showbiz is admirable. He is a nice guy, a good friend and a loving son (as everyone knows). I will forever be an avid fan of Mr Paulate. I wish the industry can produce more stars like him...just a wish:)