1949: THE MYSTERY BEHIND THE MURRAY MURDER CASE

50s local filmdom's top villain Carol Varga was in the middle of the limelight when she was caught in a love triangle in 1949 resulting into the murder of George Murray. Murray's mysterious death was front page news for months that baffled police authorities with twists and turns and even dragged top government and military officials to the case. 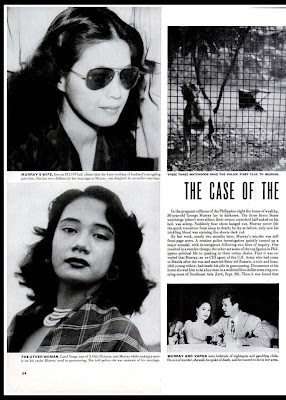 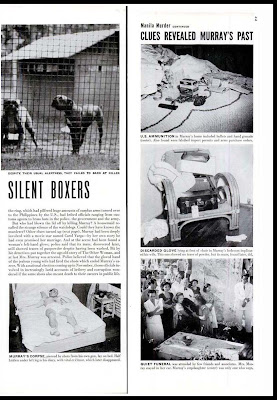 On the fateful early morning of August 13, 1949, four shots rang in the residence of the Murray family. Sprawled inside the bedroom was the lifeless body of George C. Murray, a wealthy 30-year old ex-CID agent of the US Army, who sustained gunshot wounds. The whole place was in disarray when police authorities arrived. The wife, Ester del Rosario-Murray told the San Juan police that she was awakened by Murray when he arrived at 4 o’clock in the morning. She helped him undress and went down to the kitchen to make some coffee. Shortly after, four shots (which Mrs. Murray told the police sounded to her like the backfiring of a car) rang out. She went upstairs to find her husband shot and bleeding on his bed. According to the autopsy performed by NBI Dr. E. V. de los Santos later, Murray died almost instantly.

Initial investigations showed that the bedroom windows and door balcony were open and police probers were looking into the possibility that robbers might have sneaked into the room and shoot the victim. The police were desperately looking for more clues and evidences. Political angle was taken into consideration since Mr. Murray, from the documents found in his house, was into gun smuggling and gun running involving some top government and military officials. 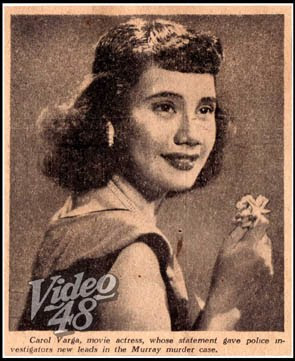 The Murray murder case became front page news for weeks and months. A movie star named Carol Varga, Carolina Trinidad in real life, was invited by the police to shed more light since she was the last person seen with the victim. Murray had been deeply involved with Varga and he had even promised her marriage. Varga told the police that she was unaware of his marriage.

News report says that a few hours before the murder, Miss Varga was met at her residence at 11 Pepin, Sampaloc, by Murray shortly after he left his own residence at 202 N. Domingo, San Juan, at 7 o’clock on the night of Friday, August 12. Murray took Miss Varga to the Marfusha nightclub on Dewey Boulevard, and later to The Tower (Majestic Arms Hotel) on San Luis and Dewey Boulevard, after which he took her home, and returned home at past 10 o’clock. Murray then left his house a few minutes later and went to the Riviera nightclub, also on Dewey Boulevard, where a Miss Velez, lady photographer of Bob’s Studio sold him for P8 two copies of a picture taken of him and Miss Varga at the Riviera last August 6 which was Miss Varga’s 20th birthday. Murray left the Riviera at closing time, and with an American friend passed by the Metro Garden at Port Area for a few drinks, after which he proceeded straight to his house in San Juan where he arrived about 4 o’clock in the morning (Saturday, August 13).

Miss Varga and Murray first met last May during the filming of the movie, “Sagur,” in which Miss Varga played a part. Murray had loaned his yatch, the 100-foot “Mistress”, for the movie. Their friendship developed. 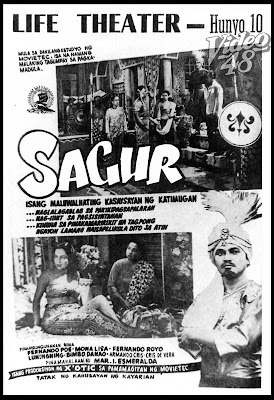 Initial break of the case came when a housemaid recalled the strange silence of the Murray’s three watchdogs. Despite their usual alertness, these dogs failed to bark at the supposed killer. Other clues turned up--- a woman’s left-hand glove which showed traces of gunpowder despite having been washed. Slowly, the angle of the Other Woman cropped up and Mrs. Murray was arrested. Police believed that jealousy drove Mrs. Murray to kill her husband.

Mrs. Murray was found guilty of parricide and was sentenced to life imprisonment. See Supreme Court Final Decision on the case.

Carol Varga continued in her acting career and appeared in many unforgettable movies. A contract star of Premiere Productions, Varga won the Famas Best Supporting Actress in 1954 in the movie, “Guwapo.” She died of cancer in 2008. 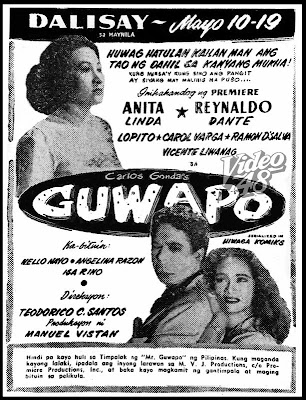 simon, i really love what you are posting on your blog...it's both entertaining and informative!!! i grew up during the 70's and your posts do brings nostalgia to that by-gone era...im sure you are devoting a lot of time and energy for all of this...may i suggest if you will or if in case you can find them some old pictures or videos of significant landmarks in manila during the 50's, 60's and 70's as captured in movie scene or stills? coz im really longing to how these structures were before...thank you very much...it made me feel sad when i've learned paco train station building was demolished as well as the old jai alai building which were important art deco buildings...im sure there are images of these structures preserved in films.

Edgar, I'm been doing that from time to time, posting photos of old Manila. You can access those posts by clicking "Signs of the Times" under Categories found at the right side of the site.
Thanks!