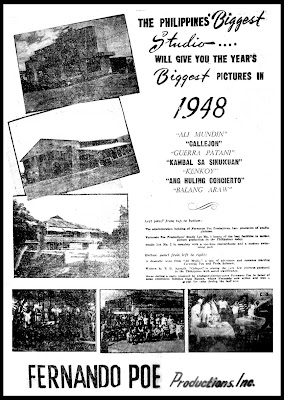 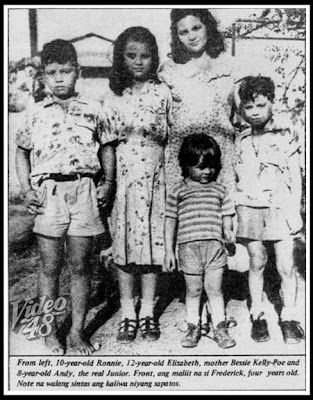 In 1949, the residence of Fernando Poe Sr. was gutted by a huge fire which started at the film vault located behind the house. Jenny, elder Poe's three year-old daughter almost got killed. Ronald Allan Poe, popularly known as FPJ, was only 10 years old that time. He mentioned in one article interview that the vault flew 20 meters away from the house when it exploded and saw film reels spinning all over the place like flying saucers.

Those are millions of pesos worth of property lost. New generations of film lovers may have been deprived of seeing these precious cinematic gems.

From the front page of the Manila Times, here's the full account of that incident--- 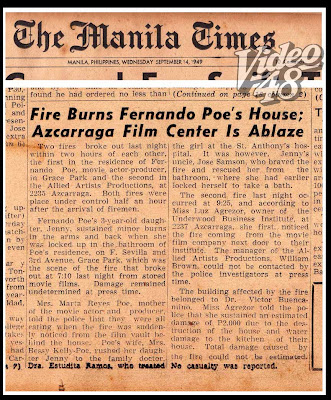 September 14, 1949--- Two fires broke out last night within two hours of each other, the first in the residence of Fernando Poe, movie actor-producer, in Grace Park and the second in the Allied Artists Productions, at 2235 Azcarraga. Both fires were place under control half an hour after the arrival of firemen.

Fernando Poe’s 3 year-old daughter, Jenny, sustained minor burns in the arms and back when she was locked up in the bathroom of Poe’s residence, on F. Sevilla and 3rd Avenue, Grace Park, which was the scene of the fire that broke out at 7:30 last night from stored movie films. Damage remained undetermined at press time.
Mrs. Marta Reyes Poe, mother of the movie actor and producer, told the police that they were all eating when the fire was suddenly noticed from the film vault behind the house. Poe’s wife, Mrs. Bessie Kelly-Poe, rushed her daughter Jenny to the family doctor, Dra. Estudita Ramos, who treated the girl at the St. Anthony’s hospital. It was however, Jenny’s uncle, Jose Samson, who braved the fire and rescued her from the bathroom, where she had earlier locked herself to take a bath.

hi there! just a comment totally unrelated to this post but completely related to your site anyway: some of the TV program ads you posted here on this blog ("alindog", "may i sing to you?", "hiwaga sa bahay na bato", etc.) were posted on the following site without proper credit: http://www.facebook.com/PinoyNostalgiaTV -- it's under the "photos" page in that site...you might want to take a look and give the owner of the facebook page a heads-up. :)