PACQUIAO KNOCKS OUT HATTON IN 2nd ROUND 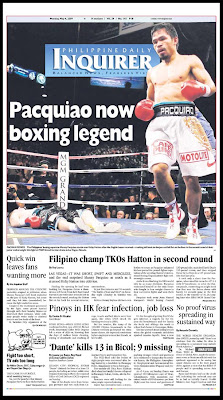 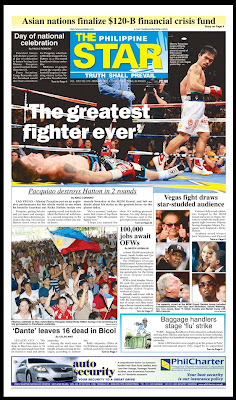 (CNN) -- Manny Pacquiao, often considered the best pound-for-pound boxer in the world, cemented his reputation Saturday night when he knocked out British boxer Ricky Hatton in the second round." That was two of the most exciting rounds I have seen in my career," said Chris Mannix, a writer for Sports Illustrated. "You saw, really from the opening bell, Pacquiao was really dominant."
With the win at the in , Pacquiao added the junior welterweight crown to his past world titles: lightweight, super featherweight, junior featherweight, featherweight and flyweight. His career record stands at 49-3-2 with 37 knockouts. The fight, for which Pacquiao reportedly earned $12 million, was brief.

Pacquiao knocked Hatton down in the first round from a series of lightning-fast right hooks. The British boxer managed to get to his feet and finish the round, but the outcome was evident once the second round began.Hatton, the International Boxing Organization's junior welterweight champion, tried the classic brawling style that has fueled his career. But Pacquiao's technique and speed quickly outclassed Hatton. The Filipino's right hooks set up a devastating left hook that flattened Hatton with a second remaining in the second round. The referee quickly ended the match.” It turned out he (Hatton) just wasn't very good at boxing," Mannix said. "You saw the difference between a great fighter and very good fighter."
The 30-year-old Pacquiao is a national hero in the , where his bouts bring the country to a standstill. He came into the fight Saturday as a narrow favorite after sending one of the biggest names in the sport, Oscar de la Hoya, into retirement with a stoppage victory in December. Nicknamed "Pacman," he grew up poor in General City in the southern . He found boxing as a way to lift himself to fame and riches, yet he remains self-deprecating outside of the ring. It is this combination of a fierce fighter in the ring and a smiling deferential one outside that has helped turn him into an idol. (May 3, 2009/ Philippine time) 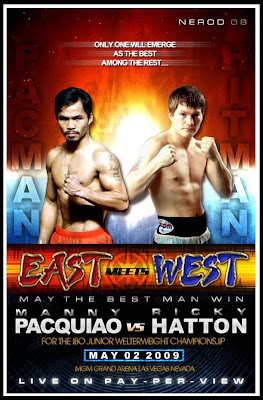 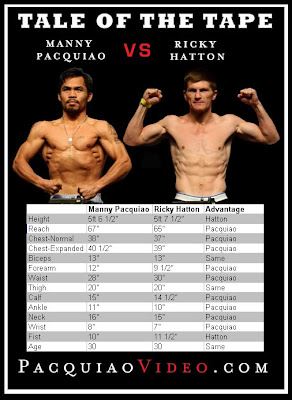