RINGSIDE DRAMA IN THE PACQUIAO-HATTON FIGHT

My heart bleeds for the family of defeated world champion Ricky Hatton, who suffers a humiliated and brutal knockout. Always humble, Pacquiao in a post-fight interview said “I thanked Ricky for giving me the opportunity to fight him because he put his championship at stake. I told him it’s nothing personal, that I just had to do my job, like he has to do his. I’m only a boxer so this is my job.” 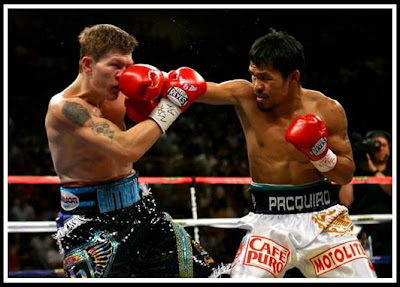 Manny Pacquiao, known as Pacman, felled Ricky Hatton with a brutally quick left hook to the chin. Referee Kenny Bayless didn’t even bother to count before stopping the fight with just a second of the round remaining.

Hatton flat on his back

Seconds earlier, Hatton fiancée, 27-year old Jennifer Dooley, a former college lecturer let out an ear-piercing scream and collapses in tears as the British boxer was floored for the third and final time by the Filipino boxer. Ms. Dooley was comforted by Jenna Coyne, the partner of Hatton’s younger brother Matthew, who had earlier won a points victory in the undercard. 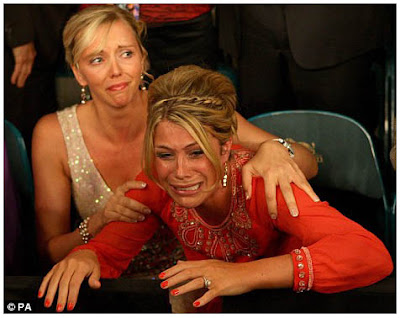 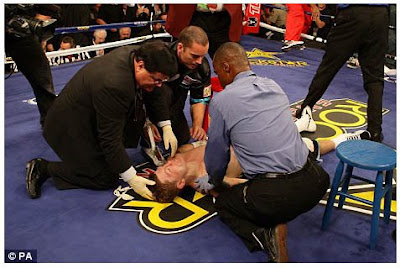 As her man lies unconscious on the canvas just yards away, Dooley was all worried and distressed. Wearing a close-fitting red dress, she gripped the back of the seat in front of her for support before turning to Miss Coyne with her hand over her mouth in horror as Hatton, nicknamed The Hitman, remained flat on his back on the canvas for three worrying minutes. Hatton’s mother Carol also looked on concerned as medics helped bring him to his senses.
Can’t bear to watch: Ricky Hatton’s mother Carol, left, with Jennifer, right, and Jenna Coyne
Hatton was eventually helped back to his corner before leaving without giving interviews for a precautionary medical check in hospital. He had landed just 18 punches on his opponent, compared to Pacquiao’s 73.

I expected The Hitman to lose to Mayweather but this wasn't on the cards for me. What a sad night.

That was such a great fight. This weight class is always fun to watch.