This is it folks! Nora Aunor vs. Vilma Santos, And God Smiled at Me vs. Dama de Noche. Which one will the FAMAS bless? The awards of the of Movie Arts and Sciences are still far away though. But not the filmfest awards which will be known tonight at the Nation Cinerama theater.
One persistent prediction in showbiz is that Vilma will make it, hands down. However, Nora watchers are just as insistent that her ‘inspired’ performance in And God Smiled at Me is simply ‘super’ and worth no less than a best actress award. 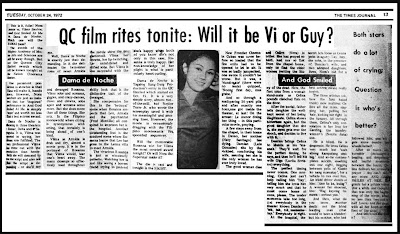 "BOTH STARS DO A LOT OF CRYING; QUESTION IS WHO'S BETTER?" 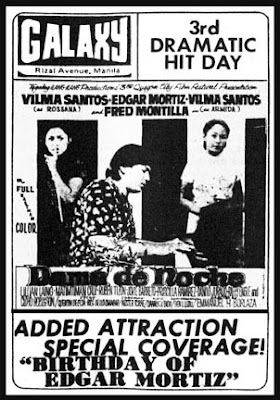 Dama de Noche is showing in three theaters--- Remar, Delta and Sampaguita. It is, Vilma was quoted as saying, her dream role fulfilled. The very professional Vilma has come out with the resolution than henceforth she will demand to see the script and also see that the script is demanding--- or she’ll say nix. Well, Dama de Noche is exactly just that: demanding. In it she delineates the twin-sister roles of sweet Armida and deranged Rosanna. Vilma sobs and screams, giggles, and crazy-dances, claws and clowns, sobs again and screams some more. But she does more than all these things. She acts. In the Filipino movieworld where crying is synonymous with acting, that certainly is being ahead of one’s kind.Vilma as Armida is drab and dry, almost a movie prop. It is in the portrayal of Rosanna that Vilma would tear one’s heart away. The many close-ups so effectively used throughout the movie show the unglamorous Vilma: her frowns, her lip-twitching, her uninhibited and stifled sobs. But Vilma is less successful with the shifty look that is the distinctive trait of the deranged. She compensates for this in the ‘betrayal’ scene when Rosanna suspects that Leo, Armida and the psychiatrist (Fred Montilla) all conspired to imprison her in the hospital. Another outstanding feat is the subdued scene where Rosanna learns that Leo has gone to the Lerma villa to meet Armida.The vivacious Rosanna is just as winsomely pathetic. Watching her is just like seeing a bosom friend trying to pretend she’s happy when both of you know she’s not only in this case, Rosanna is truly happy. Her non-knowledge of her plight is what is particularly heart-curling.Dama de Noche is Tagalog Ilang-Ilang Production’s entry in the QC filmfest which started on Oct.15. It is a very simple story, almost run-of-the-mill, but Nestor Torre, Jr. who wrote the screenplay saved it with his meaningful and amusing lines. However, the movie is occasionally dragging with the Filipino moviemania for spoonfed sequences.
Will the memorable Rosanna win for Vilma the most coveted award tonight? Or will Nora the Superstar make it? The die is cast and tonight is the NIGHT. 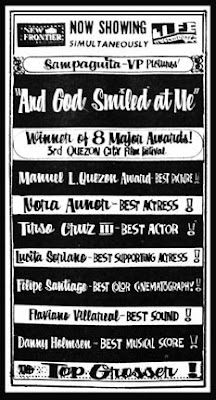 New Frontier Cinema in Cubao was never before so loaded that the fire exits had to be opened to let in air. It was so badly jampacked, one swore it couldn’t be worse. But it was, a ‘stand-mate’ (there were no seats) quipped, ‘Noong first day, mas grabe.’ And so through a snail-pacing 20-yard pila and after exactly one hour, one got inside the theater, at last! On the screen: La Aunor doing her thing--- praying. A few steps away from the chapel, in their home in , her mother (Naty Santiago) lies dying. Damian (Luis Gonzales) sits by the sickbed, comforting his wife, assuring her she is the only woman he has ever truly loved. The good woman dies and Celina (Nora) is bitter. She had prayed so hard, had run so fast from the chapel home, only to find the elder women reciting the litany of the dead. Here, the first sobs from a woman stand-mate as Celina pounds clenched fists on the door. After the burial, father tells daughter the well-kept secret of her being illegitimate. Celina shows bitterness again, but the good daughter that she is, she soon gets over from the shock and decides to live with it. Damian brings Celina to as his ‘inaanak.’ They’ll wait for the perfect timing, he says and then he’ll tell his wife Olga (Lucita Soriano) everything. The perfect timing never comes. One morning, Celina just can’t help calling him ‘Itay,’ telling him she loves him very much and that he must come home at once, please. The tender moments take too long, and everybody in the theater knows Damian is ‘tsk, tsk, tsk, mamamatay.’ Everybody is right. At the hospital, the secret lets loose as Celina jerks in agony. ‘Itay, Itay,’ she sobs, in the presence of Damian’s wife and two adopted daughters. Here, Nora’s bid for a best actress award really begins. The three witches (oh, how the fans hated them) now maltreat Celina all the more, slapping her, pulling her hair, kicking her right in the tummy. All through these, Celina’s only consolation is her love for Carding (Tirso Cruz III), the laundry-woman’s (Nenita Jana) son. He is blind. He is desperate. He loves Celina very much but ‘wala akong karapatang umibig.’ And so he contemplates suicide, sneaking out one night, begging between yells of ‘Gusto ko nang mamamatay,’ for a vehicle to run over him. An irked driver shouts at him: ‘Ano ka ba, bulag?’ A woman fan shouted too: ‘wag kayong tumawa, serious yan.’ And then, what do you know, another death: not the blind leading man (that would’ve been a blunder) but his mother, who had followed him.After so much unbearable beating and tearful moments between the lovers, Celina delivers her ultimate prayer --- she can’t take it anymore. AND GOD SMILES AT HER. God grants her a golden voice (for a while one thought that was only the beginning of the movie, after no less than two-and-a-half hours) and she sings all her heart at the foot of the altar. And this is not the end of it. 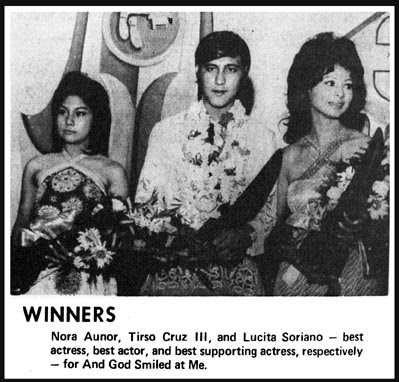 In reaction to the article above and the filmfest award results, a reader sent an open letter to the QC Filmfest Judges. Read the text in full and be the judge yourself. 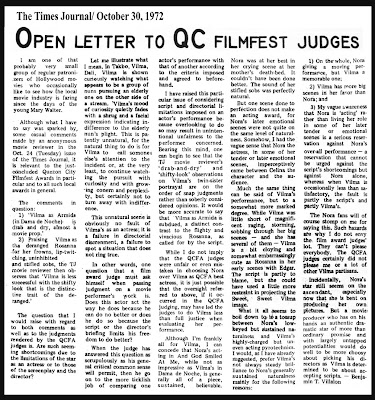 However, in 1973, Vilma Santos received the FAMAS Best Actress award (in a tie with Boots Anson-Roa in "Tatay na si Erap") in the movie "Dama de Noche," thus avenging her loss to perennial rival, Nora Aunor in the Quezon City Film Festival. 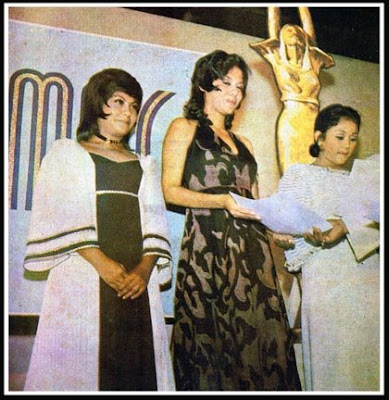 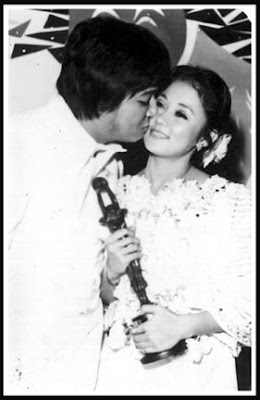 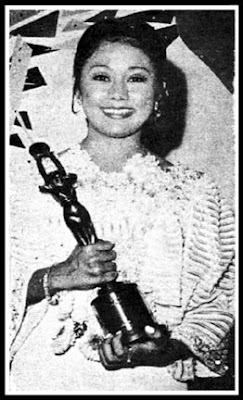 Naging iba kaya ang resulta if the same set of films competed for Famas? I guess, we will never know for sure.

Thanks Ken for this bit of info. Maganda sana kung sa movie na "And God Smiled at Me" nominated si Nora sa Famas. It could be a fight to the finish--- baka triple tie pa!

I was still young then to read, let alone find these articles. Thank you Mr. Simon for unearthing them for us. I am a Nora fan. I hope you find more Nora memoirs to share.

Btw, you probably won't remember me but I once visited your shop during my stay in Manila last month. We had a brief chat and even then I was amazed by the passion at what you do and sharing them too. I was ecstatic when you said that you have a copy of Silveria, a Dolphy movie which I have a fond childhood memory of. I have also watched the 3 Kurosawa movies. Thank you and for the special price too.

My name is Ellen from Sydney.

Your site is a gem. Keep it up!

I don't think so. I firmly believe that the same will be the result. The open letter perhaps opened up the judges eyes, and choosing the other Aunor's film is a decision which shows that she , Nora acted on that film better and had more chances to be of rival with the other two winning actress. Though at the end still failed in comparison, at the very least in that year alone. Henceforth, up to this day, let alone that FAMAS results has attested to the two actresses' acting prowess and let alone the present movie loving public judge who's better, the kind of roles demanded from each of them, the one who outshines the greater challenge out of a better role given to them. Clearly, I say, Vilma deserves the win.

Pathetic to those sour grapers, if your idol wins, deserving pero pag talo binili, hahaha even from the same award giving body. Understandbly, you are fanatics, that's why it would take an unbiased jurors to judge in every acting awards rites. Accept that, you have no choice. Unless you create your own acting award group to shower your idol of awards

Maraming salamat po sir! A piece of history for me. My mom was a double in this movie. Very glad ako nakita ko sa credits name ni mommy