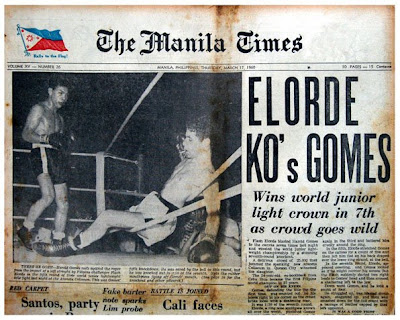 Before Manny Pacquiao, the great Gabriel “Flash” Elorde (1935-85) was the most celebrated boxer in Philippine sports history.

Fighting as a junior lightweight (today’s super featherweight), Elorde defended the world 130-pound title for a record 10 times in a span of seven years (1960 to 1967).

Flash Elorde blasted Harold Gomes to the canvas seven times last night and wrested the world junior lightweight championship by a stunning seventh-round knockout. A delirious crowd of 25,000 that jammed the spanking new Araneta Coliseum in witnessed the slaughter. The 24-year old ex-bootblack from thus became the first Filipino world champion in 37 years.

Out on his knees

Gomes, defending the title for the first time, was counted out on his knees right in his corner as the crowd broke loose with a deafening roar. It was 1:50 of the seventh round. Elorde, a ring wise southpaw known all over the world, punished Gomes severely with his left, carving out all the knockdowns with this fist.

Every round except first

Elorde got every round except the first, which was even. He floored Gomes twice in the second round, with the bell saving Gomes. Elorde downed Gomes again in the third, once in the fifth and felled him once for four counts before putting him away for keeps in the seventh.

After a tame first round, Elorde smashed Gomes to the canvas early in the second round, and the titleholder never got started. Gomes scrambled to his feet, but his eyes were glazed and the referee, Barney Rose, had to turn him around. Elorde promptly belted him to the floor with the bell ringing at the count of four.

Flash crushed Gomes to the floor again in the third and battered him cruelly around the ring. In the fifth, Elorde stretched Gomes on the canvas for a count of five and then left him flat on his back draped over the lower ring strand, at the bell. In the seventh round, Elorde, appeared coasting, and Gomes looked as if he might recover his senses. But the Flash suddenly darted two right leads to Gomes’ head and then crossed a shattering left to the jaw. Down went Gomes, and he took a count of four. He struggled up, was blasted down again, staggered up and then was smashed down for the full count with a barrage of leather capped by that left uppercut.

It was a good fight

When Referee Ross finished his count over the prostrate Gomes, the crowd at ringside erupted into the ring, scrambling chairs, typewriters, telephones and newsmen in the process. Elorde burst into tears as his countrymen pummeled him in the back. Gomes sat in his corner dazed. “It was a good fight,” Gomes whispered as he congratulated Elorde. Save for a slight cut, Elorde was unmarked. Elorde hit the weight limit of 130 pounds right on the nose--- after shedding one and three-fourths at noon. Gomes weighed 128 ¼ pounds. It was Elorde’s second title title fight. He fought Sandy Saddler at in 1956 for the world featherweight title and lost.

Elorde received only php15,000 for his effort, but he can demand his price in a return bout required by contract in 60 days. Gomes, defending the title he won against Paul Jorgensen, a fellow American, last July, received php50,000. Promoter Jorge Araneta had predicted a gate of php250,000 but a higher gross was expected from the overflow mob that jammed the 23,000-seat dome arena.

Gomes is 27, of Portuguese-Greek ancestry. He had 54 fights, losing only four--- three of them to Tommy Tibbs, a recent visitor who was knocked out by Bert (Nursery Kid) Somodio.

The last Filipino to hold a world boxing title was Ceferino Garcia who shared the middleweight crown in 1939. Incidentally, Pancho Villa gave the its first world title also by a seventh round knockout of Jimmy Wilde in 1923. So did Garcia in beating Fred Apostol in that 1939 fight.

good old days! check out my blog of the first ever Filipino champ, the great Francisco Guilledo aka Pancho Villa http://spaceboykokong.blogspot.com/2008/09/legendary-pancho-villa.html