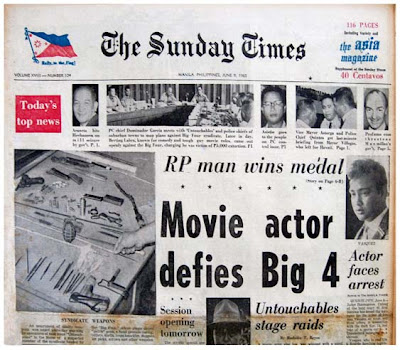 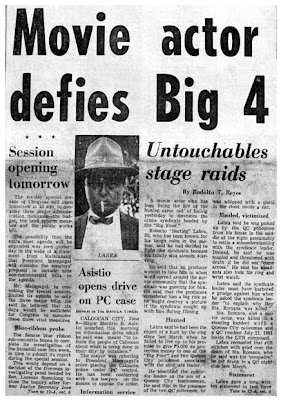 A movie actor who has been living the life of the hunted came out of hiding yesterday to denounce the crime syndicate headed by the “Big Four.” Roberto “Berting” Labra, 30, who has been known for his tough roles in the movies, said he had decided to fight the syndicate because his family was already starving. He said that no producer wanted to take him in when word spread around the movie community that the syndicate was gunning for him. He said that the producers considered him a big risk as he might destroy a picture if the syndicate caught up with him during filming. 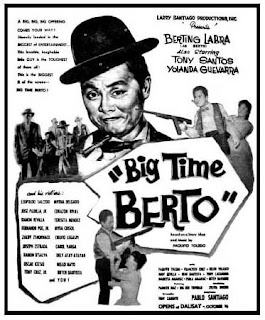 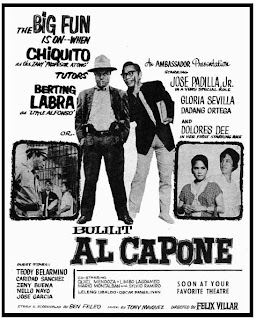 Labra said he had been the object of a hunt by the ring since last March when he failed to live up to his promise to give Php5,000 as protection money to one of the “Big Four” and two Quezon City policemen associated with the syndicate leader. He identified the syndicate leader as the son of a businessman. He said that in the presence of the two QC policemen, he was whipped with a pistol in the chest inside a car.

Labra said he was picked up by the QC policemen from his house in the middle of the night presumably to settle a misunderstanding with the syndicate leader. Instead, he said he was mauled and threatened with death if he did not “come across.” He said his assailants also took his ring and wrist watch. Labra said the syndicate leader must have harbored a grudge against him when he ashed the syndicate leader “to explain why Boy Sta. Romana was killed.” Sta. Romana, also a movie actor, was killed in a shooting incident with a policeman and a QC resident July 21, 1961 inside the LVN compound. Labra recounted that still stricken with grief over the death of Sta. Romana, who he said was his ‘compadre,’ he got drank in a QC nightclub last March.

Labra gave a long written statement to task force “Untouchables,” headed by NBI Assistant Director Arturo Xavier. He was accompanied by MPD Pat. Angel Judalena. The “Untouchables,” a group of elite agents from the NBI, CIS, and suburban police agencies, said they expect to arrest the syndicate leader and the two QC policemen any moment.

In another front, the “Untocables” swooped down early yesterday morning on the houses of two suspected syndicate members in . They failed to get their men, but confiscated an assortment of guns, ammunition and deadly weapons believed being used by the syndicate. Seized from the house of Francisco Acab Sr. at 114 Gen. Valdes st., Caloocan City, were two “paltik” guns, 18 rounds of live ammunition, seven empty shells, 12 slugs of different calibers, two empty magazines, two daggers, one sting ray or “buntot Page,” one brass knuckle, three ice picks, one slingshot, 13 darts, two lead pipes, three gun rod cleaners, a pistol holster marked “Kit,” one police whistle and firearms spare parts. Target of the “Untouchables’ raid on the Acab house was Francisco “Kit” Acab Jr., an alleged member of the syndicate.

Also raided was the house of Vrgilio Asistio on J.Luna st. He is a relative of Caloocan City Mayor Macario Asistio. Both Kit Acab and Virgilio Asistio were accused in a robbery case filed before the justice of the peace Ricardo C. Robles. The victims in the alleged robbery were Jose Feliciano, Angel Alonzo, Arcadio de la Cruz and Martin de Jesus. The raiders were personally led by Xavier. They were armed with warrants issued by JP Robles.

More on THE BIG FOUR