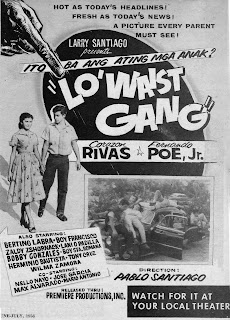 Actor Boy Sta. Romana was a member of a closely-knit group of teenage boys known as the Lo’ Waist Gang. The original group was composed of Fernando Poe, Jr., Zaldy Zshornack, Berting Labra, Boy Francisco, Butch Bautista, Mario Antonio, Bobby Gonzales, Tony Cruz and Boy Sta. Romana. Chiquito and Paquito Toledo followed later. Their first movie in 1956 was named after their gang. It was the first of the highly successful series of Lo' Waist Gang movies. It made FPJ a star. Because of the gang's popularity, some members of the group were soon provoked and set upon by some rival gangs out to test them. FPJ and the rest of the group were often found themselves in hot waters. One unfortunate incident involved Boy Sta. Romana, a hot-tempered member of the group who met an untimely death at a young age of 25. Here's that story that became an headline item in 1961. 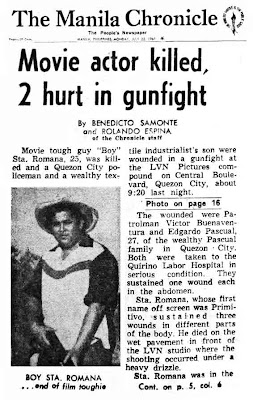 Movie tough guy “Boy” Sta. Romana, 25, was killed and a policeman and a weathy textile industrialist’s son were wounded in a gunfight at the LVN Pictures compound on , about 9:20 last night. The wounded were Patrolman Victor Buenaventura and Edgardo Pascual, 27, of the wealthy Pascual family in . Both were taken to the in serious condition. They sustained one wound each in the abdomen. Sta. Romana, whose first name off screen was Primitivo, sustained three wounds in different parts of the body. He died on the wet pavement in front of the LVN studio where the shooting occurred under a heavy drizzle.

Sta. Romana was in the LVN compound with Joseph Estrada and a movie actress Perla Bautista y Garcia, 21, at the time of the shooting. Estrada was taken in for questioning after the shooting. Also questioned by investigators was Francisco Ruben, owner of a car in which and Pascual were reported to have ridden in going to the LVN compound and who took the wounded men to the hospital.

Ruben, 29, employee of the Pascual textile firm and who resides at the Shellborne Hotel, told investigators that he, Pascual and were driving near the LVN compound when two young girls excitedly told them that a man was threatening people in the compound with a gun. , being a policeman but who was in plain clothes as he was off-duty, reportedly drove towards the gate of the studio grounds. There he asked to be let in by two guards so that he could go and disarm the troublemaker, who happened to be Sta. Romana. The guards, Eduardo de Guzman, 52, and Roman Badenas, 26, let and his companions in after ascertaining that was a policeman. When they were in the compound, reportedly identified himself to Sta. Romana and asked the latter to surrender his gun. Sta. Romana did not give up his gun and the shooting started.

Another version pieced by the police from the testimony of some witnesses was that late yesterday afternoon, Sta. Romana was with Armando Garces, movie director, Estrada and Perla Bautista at Eugene’s restaurant in Cubao. Shortly after they arrived at the restaurant, Pascual, whose family owns the La Consolacion building near the restaurant, arrived in front of the eatery with a girl known only as “Haydee.” Haydee, who apparently knew Perla Bautista, called the latter outside the restaurant. Thinking that it was Pascual who had called Perla outside, drew his gun and challenged Pascual to a duel. Pascual, however, refused to fight although he reportedly had a .38 caliber revolver with him at the time. While Sta. Romana was challenging Pascual to a duel, Estrada came out of the restaurant and slapped Perla in front of Pascual and the rest. In order to avoid trouble, Pascual then took Haydee away and later went to the house of , his friend, to tell him about the incident. Subsequently, and Ruben, who had now joined Pascual, went to the house of one Pablo Santiago, a lawyer, to consult the latter on the possible legal action to be taken against Sta. Romana and Estrada. While they were talking with , somebody reported to that Sta. Romana was in the LVN compound threatening studio personnel and other people with a gun. , although he was off-duty, decided to go to disarm Sta. Romana. He and his companions left on Ruben’s car. When they reached the studio gate, the guards let them in as soon as identified himself as a policeman. The shooting occurred shortly after the trio had entered the gate. 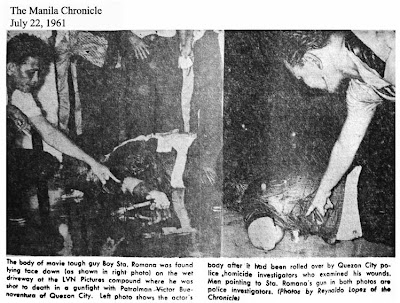 Police later found Sta. Romana’s body lying face down on the wet pavement, one hand still holding his gun, a .38 caliber Luger-type pistol. Police ballistics experts said they would conduct tests to determine whether all the bullets that hit and Pascual were fired from Sta. Romana’s gun, or whether some of them came from another gun. Tests would also be conducted to find out whether Sta. Romana’s three wounds were inflicted by ’s .38 caliber pistol, police said.

Still, another version of the shooting was given by the gate guards. De Guzman told investigators that Sta. Romana arrived at the LVN lot in a car with two companions. One of the actor’s companions was said to be Estrada. Approximately five minutes later, another car bearing three men arrived. The new arrivals reportedly asked De Guzman if Sta. Romana was around. On of them told the guard to tell Sta. Romana that “Esco” was looking for him. The security guard went inside to tell Sta. Romana about the presence of the three men at the gate. Sta. Romana then told the guard, “papasukin mo sila.” A few moments after, shooting erupted within the compound.

Follow-up articles on the incident:
to read, click images to enlarge 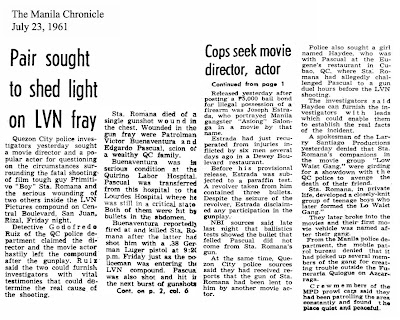 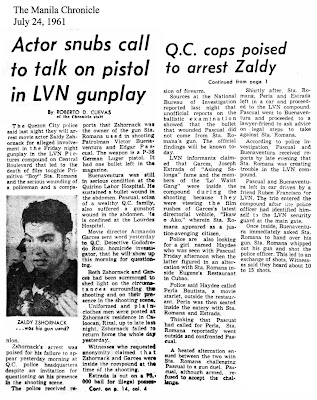 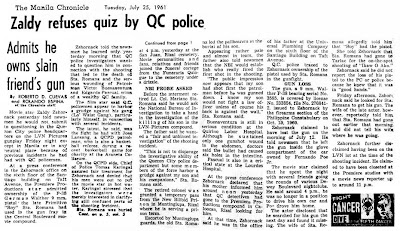 is edgardo pascual the same person with the big 4 story?

There are other similar incidents: Jess Lapid dying in a duel in a Quezon Blvd. nightspot, and Eddie Lagalag Fernandez, shooting a scion of a wealthy clan over a fracas on a sexy starlet....

Wow, you certainly have a fascinating blog!

yes, Edgardio Pascual is the same person affilated with the big 4 story. I am his grand son.

Yes Edgardo Pascual is the same Ging Pascual associated with the Big 4. I know for the fact that Boy Sta Romana's brother Val was very angry with Erap, cause he knew that Estrada was the cause of all this feud but he left and did not stand by his friend Boy Sta Romana. Onetime he went to Erap's house in San Juan challenging Erap to come out.

Val Sta Romana was a dabarkads in Pasig because he was married then to Linda Angeles, magaling din makisama pero mainitin ang ulo kapag lasing na.