Sometime in 1964, 50s and 60s popular singer-actor Diomedes Maturan gone missing for about 3 months and speculations were rife that something terrible happened to him. A hot news item then… Manila Times reporter Rod Reyes covered the whole story--- 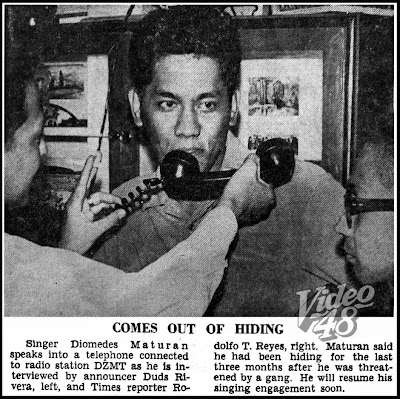 September 28, 1964--- Singer Diomedes Maturan, 24, confirmed yesterday the threats on his life and said that he had been hiding in his house at 2376 Tejeron st., Sta. Ana, for the past three months. Maturan, was located by the Manila Times in his house after he was reported missing by his friends and associates in the local entertainment world. Movie personalities and show business producers who were contacted by the Times the previous days denied knowledge of his whereabouts.

Maturan and his mother, Mrs. Felisa Padilla-Maturan, 54, said they told all those looking for the actor-singer that he was in the province. Mrs. Maturan said that she cancelled his radio program and singing engagements on radio, stage, and television following the threats on the singer sometime last June as Diomedes hid in his room.

The singer himself said that he had been able to go out only lately and with a bodyguard. He said that since June, he had been staying in his room. He said that before the police drive on crime, he used to scale the back wall of their house in getting in and out of the house. He said he never used the front gate. Maturan refused to name the persons who had been threatening him, but he said that they were riding in the same cream-colored Impala car used by the gang which shot up the Manila Grand Opera House.

He said that the gang started looking for him shortly after he broke off with the aunt of one or the gang members who is the son of a suburban city judge. The singer denied that he had promised to marry the suspect’s aunt. Maturan said the gang came to his house many times looking for him, but his mother told the gang that the singer was sick in the province. The gang told Mrs. Maturan that they would not stop until they had found the singer. Mrs. Maturan said the gang wanted to take the singer with them to the Bulakena restaurant and to the Golden Gate motel. She said she was afraid that her son would get hurt if he went with the group.

Maturan said he also knew that it he went out with the gang, he would be beaten up. Maturan said he reported the threats to Eduardo Quintos, MPD chief last July. He gave the police the plate numbers of the cars used by the gang. Matunan and his mother were scheduled to leave for the New World’s Fair last Aug. 30, but they cancelled the trip when they learned that the judge's son is in New York. Maturan said he may appear on radio and TV again next week. He said he is no longer afraid. He added that the gang's activities have been contained. Maturan earns about P6,000 a picture and P2.000 a week in the Opera House. During the three months that he has been in hiding, Maturan said he had not earned a single centavo. 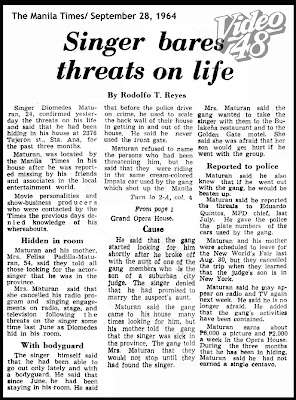