"They were phone pals for one year until they met each other in person during the memorable FAMAS awards night last year. Their meeting has blossomed into a beautiful romance." 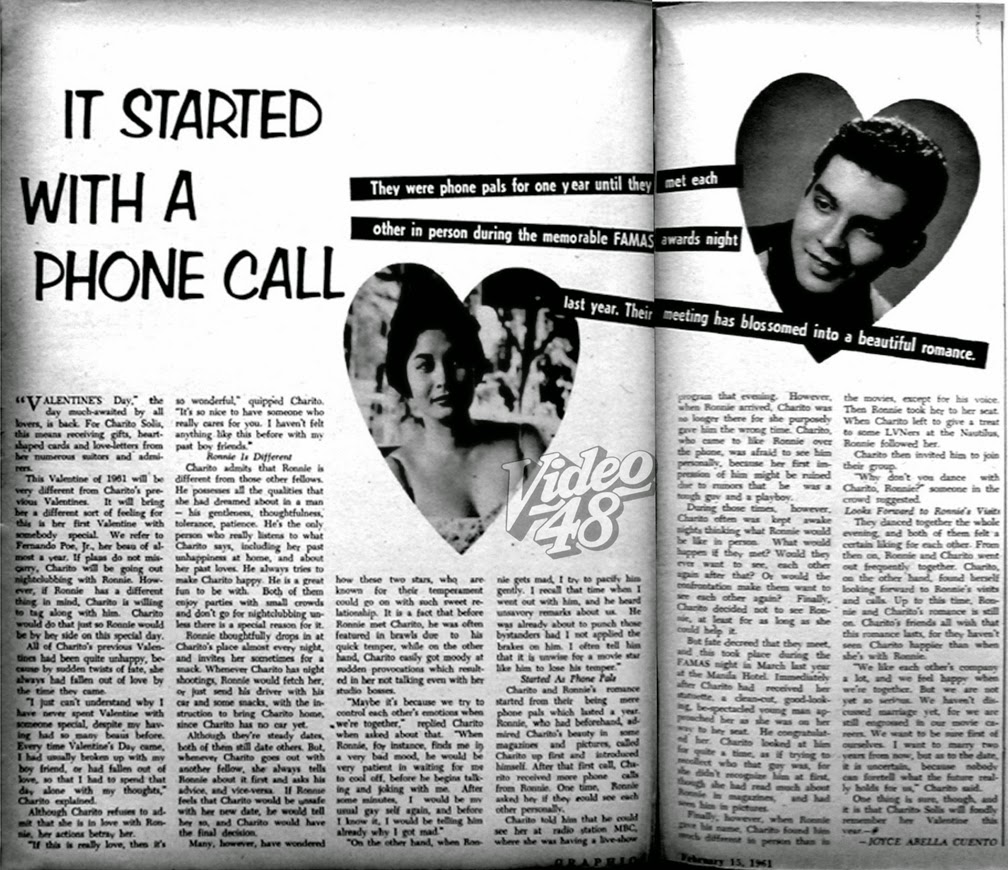 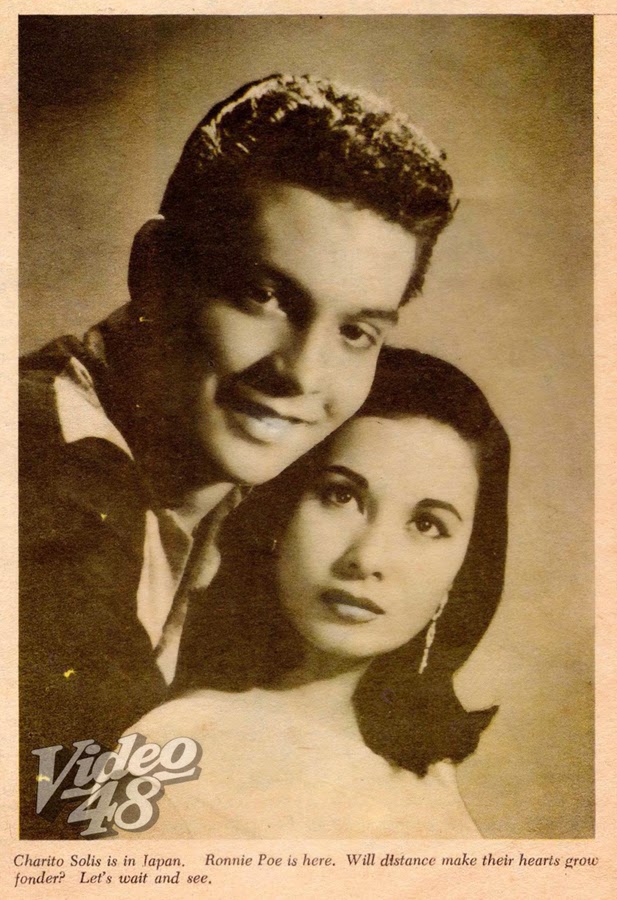 IT STARTED WITH A PHONE CALL
by Joyce Abella Cuento

“Valentine’s Day,” the day much-awaited by all lovers, is back. For Charito Solis, this means receiving gifts, heart-shaped cards and love letters from her numerous suitors and admirers.
This Valentine of 1961 will be very different from Charito’s previous Valentines It will bring her a different sort of feeling for this is her first Valentine with somebody special. We refer to Fernando Poe, Jr., her beau of almost a year.  If plans do not miscarry, Charito will be going out nightclubbing with Ronnie. However, if Ronnie has a different thing in mind, Charito is willing to tag along with him. Charito would do that just so Ronnie would be by her side on this special day.

All of Charito’s previous Valentines had been quite unhappy, because by sudden twists of fate, she always had fallen out of love by the time they came.  “I just can’t understand why I have never spent Valentine with someone special, despite my having had so many beaus before. Every time Valentine’s Day came, I had usually broken up with my boyfriend or had fallen out of love, so that I had to spend that day alone with my thoughts,” Charito explained.
Although Charito refuses to admit that she is in love with Ronnie, her actions betray her. “If this is really love, then it’s so different,” quipped Charito. “It’s so nice to have someone who really cares for you. I haven’t felt anything like this before with my past boyfriends.”

Charito admits that Ronnie is different from those other fellows. He possesses all the qualities that she had dreamed about in a man---his gentleness, thoughtfulness, tolerance, patience. He’s the only person who really listens to what Charito says, including her past, unhappiness at home, and her past loves. He always tries to make Charito happy. He is a great fun to be with. Both of them enjoy parties with small crowds and don’t go for nightclubbing unless there is a special reason for it.

Ronnie thoughtfully drops in at Charito’s place almost every night, and invites her sometimes for a snack. Whenever Charito has night shootings, Ronnie would fetch her, or just send his driver with his car and some snacks, with the instruction to bring Charito home, since Charito has no car yet.

Although they’re steady dates, both of them still date others. But, whenever Charito goes out with another fellow, she always tells Ronnie about it first and asks his advice, and vice-versa. If Ronnie feels that Charito would be unsafe with her new date, he would tell her so, and Charito would have the final decision.

Many, however, have wondered how these two stars, who are known for their temperament could go on with such sweet relationship. It is a fact that before Ronnie met Charito, he was often featured in brawls due to his quick temper, while on the other hand, Charito easily got moody at sudden provocations which resulted in her not talking even with her studio bosses.
“Maybe it’s because we try to control each other’s emotions when we’re together,” replied Charito when asked about that.

“When Ronnie, for instance, finds me in a very bad mood, he would be very patient in waiting for me to cool off, before he begins talking and joking with me. After some minutes, I would be my usual gay self again, and before I know it, I would be telling him already why I got mad.”

“On the other hand, when Ronnie gets mad, I try to pacify him gently. I recall that time when I went out with him, and he heard unsavory remarks about us. He was already about to punch those bystanders had I not applied the brakes on him. I often tell him that it is unwise for a movie star like him to lose his temper.”

Charito and Ronnie’s romance started from their being mere phone pals which lasted a year. Ronnie, who had beforehand admired Charito’s beauty in some magazines and pictures, called Charito first and introduced himself.  After the first call, Charito received more calls from Ronnie. One time, Ronnie asked her if they could see each other personally. Charito told him he could see her at radio station MBC, where she was having a live show program that evening. However, when Ronnie arrived, Charito was no longer there for she purposely gave him the wrong time. Charito, who came to like Ronnie over the phone, was afraid to see him personally, because her first impression of him might be ruined due to rumors that he was a tough guy and a playboy.

During those times, however, Charito often was kept awake nights thinking what Ronnie would be like in person. What would happen if they met? Would they ever want to see each other again after that? Or would the confrontation make them want to see each other again? Finally, Charito decided not to see Ronnie, at least for as long as she could help it.

But fate decreed that they meet and this took place during the FAMAS night in March last year at the Manila Hotel. Immediately after Charito had received statuette, a clean-cut, good-looking, bespectacled young man approached her as she was on her way to her seat. He congratulated her. Charito looked at him for quite a time, as if trying to recollect who that guy was, for she didn’t recognize him at first, though she had read much about Ronnie in magazines and had seen him in pictures.

Finally, however, when Ronnie gave him his name, Charito found him much different in person than in the movies, except for his voice. Then Ronnie took her to her seat. When Charito left to give a treat to some LVNers at the Nautilus, Ronnie followed her. Charito then invited him to join their group. “Why don’t you dance with Charito, Ronnie?” someone in the crowd suggested.

They danced together the whole evening, and both of them felt a certain liking for each other. From then on, Ronnie and Charito went ou frequently together. Charito, on the other hand, found herself looking forward to Ronnie’s visits and calls.

Up to this time, Ronnie and Charito’s romance is still on. Charito’s friends all wish that this romance lasts, for they haven’t seen Charito happier than when she is with Ronnie.
“We like each other’s company a lot, and we feel happy when we’re together. But we are not yet so serious. We haven’t discussed marriage yet, for we are still engrossed in our movie careers. We want to be sure first of ourselves. I want to marry two years from now, but as to the date, it is uncertain, because nobody can fortell what the future really holds for us,” Charito said.

One thing is sure, though and it is that Charito Solis will fondly remember her Valentine this year.

FPJ and Charito Solis appeared together in three movies--- 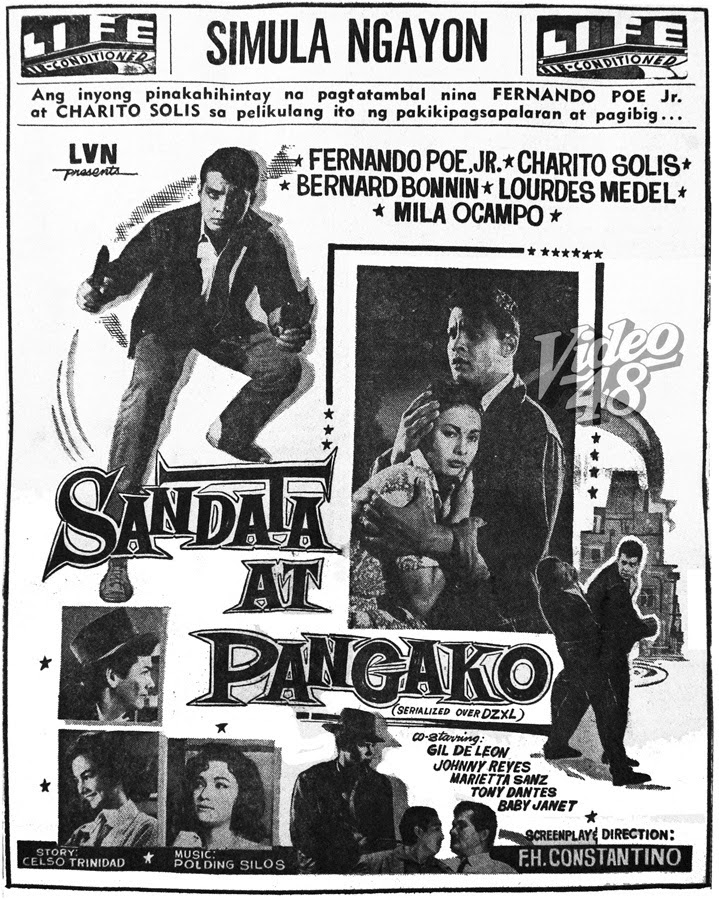 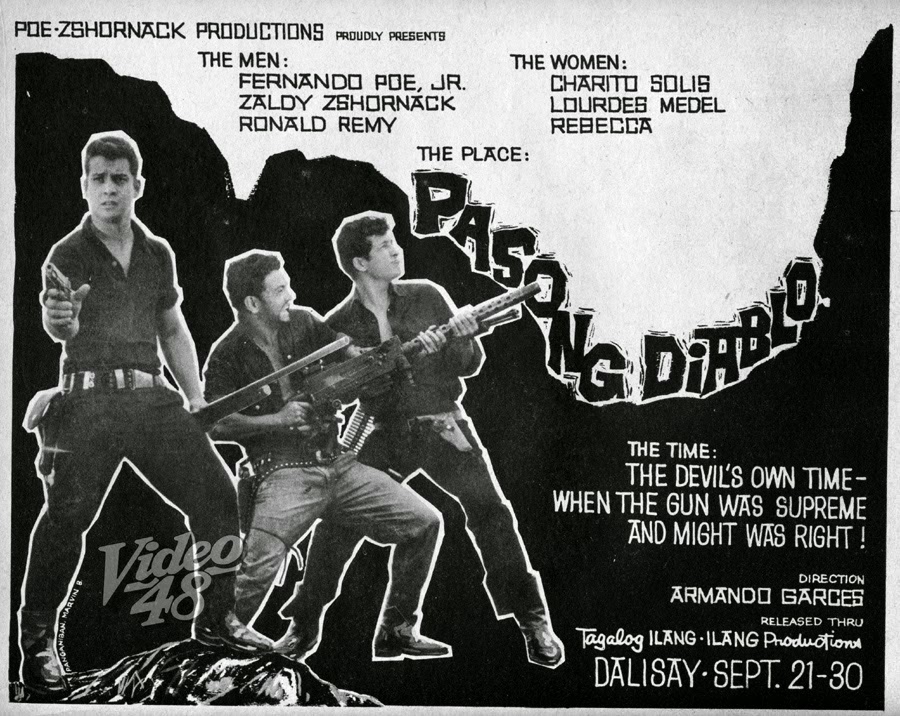 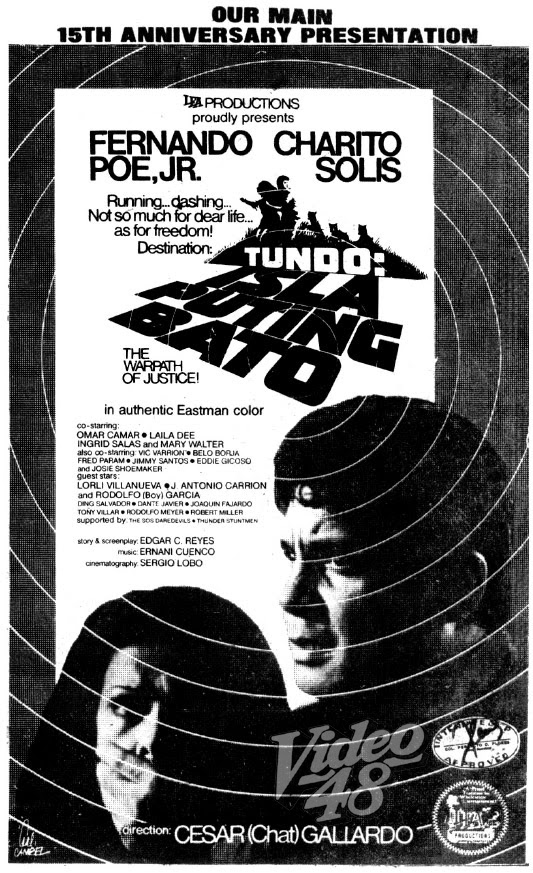