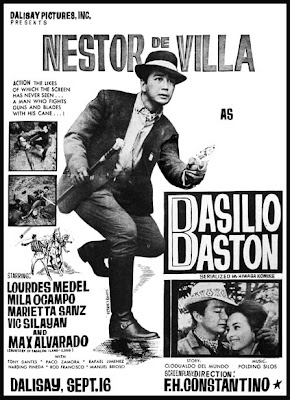 "Basilio Baston" (1962)- Stars Nestor de Villa, Lourdes Medel, Mila Ocampo, marietta Sanz, Vic Silayan and Max Alvarado/ Directed by F.H. Constantino
In 1961, LVN Pictures folded up. Many of its prized contract stars became freelancers and some were absorbed by its sister company, Dalisay Pictures. Dalisay was best remembered of coming up with memorable movies like Alyas Palos, Bakas ng Gagamba, Pitong Atsay, Tang-Tarang-Tang, and many of Nida Blanca-Nestor de Villa hits (i.e. Sikat na Siga Pa, Oy…Akin Yata’Yan, Asyang ng La Loma). One of the movies they produced that caught my attention was Basilio Baston, “a man who fights guns and blades by his cane.” Based from a komiks novel written by Clodualdo del Mundo and serialized in Hiwaga Komiks, it was made into a movie in 1962. It starred one of LVN's top stars, Nestor de Villa, one of the rare times the actor appeared in a solo starrer. The movie reminds me of the 60s TV show, "Bat Masterson," a favorite show of mine during my childhood years, which also uses his cane to thwart his opponents. 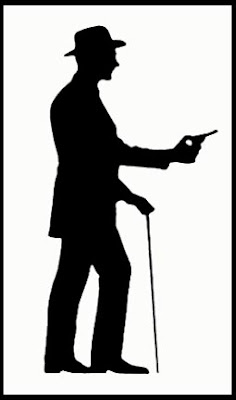 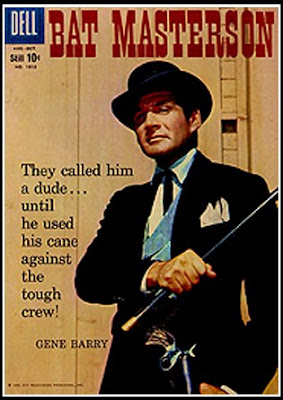 I remember this film "Basilio Baston" as it was one of my favorite Hiwaga komiks serials during my childhood years. Do you have komiks strips or cover of this novel?

None, James. I'm searching it at Komiklopedia, wala rin.