JANUARY 9: THE FEAST OF THE BLACK NAZARENE 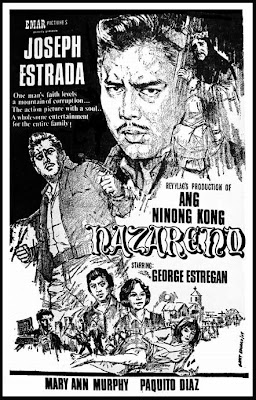 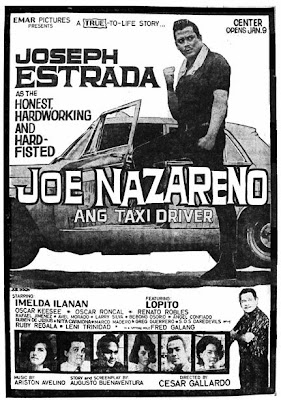 In 1969, Joseph Estrada did a movie with The Black Nazarene as its central theme. "One man's faith levels a mountain of corruption... The action picture with a soul..." says the blurb. The movie, Ang Ninong Kong Nazareno, released by Emar Pictures also starred George Estregan, Mary Ann Murphy and Paquito Diaz. He also made one, titled Joe Nazareno, Ang Taxi Driver in 1965. No relevance, I think with the Black Nazarene. 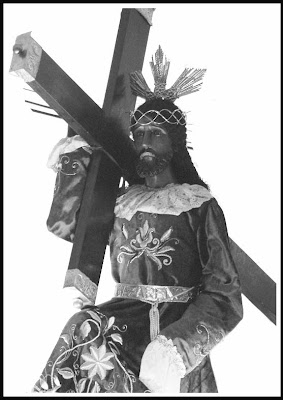 The feast of the Black Nazarene on January 9 is considered one of the most spectacular religious events that take place in the Philippine history.

Every year thousands of devotees from all walks of life come to the district of Quiapo to take part in the procession as a way of strengthening their faith or fulfilling their “panata” (vow) to Lord..

The Black Nazarene is the patron saint of Quiapo, a small but well-known part of , a hub of trade and commerce because of the Quiapo market and the many stores located there.

The statue was brought to by a Spanish priest in 1607 aboard a ship. The ship caught fire, burning the image and thus came to be known as the Black Nazarene. Though the image was burnt, the people decided to preserve and honor it. Since then, miraculous things have been reported to those who touch the image.

The statue is placed in a gilded carriage for the procession. As the procession starts, procession participants garbed in maroon tops grab two long ropes and pull it to make the carriage move. Many will attempt to touch the image while some throw their handkerchiefs and towels in the air. People who join in the procession walk barefooted as a sign of humility.

The devotion to the Black Nazarene is long time practice of the Filipino Catholics and they believe that through their faith with Jesus Christ, there will be peace and harmony among families, long life and good health among people, deliverance from all calamities and disasters, and prosperity, joy and love among nations.

The Roman Catholic Archdiocese of
http://www.rcam.org/feastday/feast_black_nazarene.htm

Erap Estrada as the Black Nazarene. Haha. Thanks for this info.

lvn pictures produced a movie 'sa paanan ng Nazareno' back in 1951 and starred the young and beautiful priscilla cellona and jaime delarosa.the movie ended w/ the stars at the quiapo church and jaime delarosa begging forgiveness from the Black Nazarene.he played a hoodlum in this movie