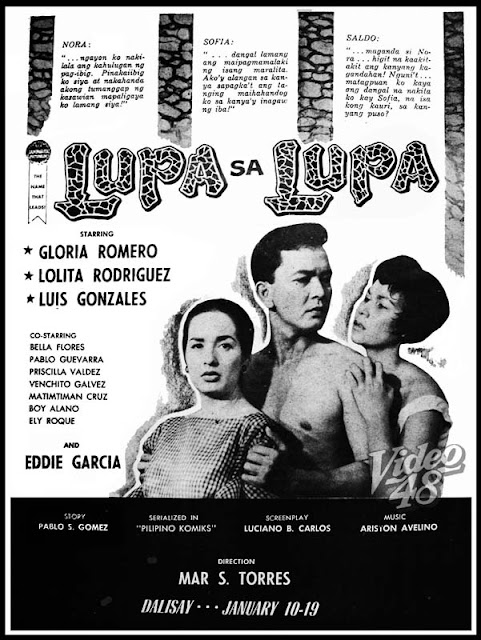 It is love, hate and revenge in this 1960 movie, “Lupa sa Lupa.” Based from a komiks serial novel by Pablo S. Gomez, it tells of Saldo (Luis Gonzales) who vowed vengeance when his mother was sideswiped and killed by a rampaging truck owned by Don Basilio (Pablo Guevarra). The greedy Don Basilio owned that large tract of land being occupied and squatted by Saldo’s family and many of the poor folks and he wanted them out.
To exact his revenge, Saldo disguised himself as a wealthy businessman, gate crushed in a party and introduced himself to the family. He met Nora (Gloria Romero), Don Basilio’s daughter. The plan was to court Nora and abandon her comes wedding day. He, however, was committed to another woman in the slum named Sofia (Lolita Rodriguez), who was sold to Saldo’s idea. Bert (Eddie Garcia), Don Basilio’s notorious right-hand man, had eyes on both Sofia and Nora. He raped and almost did the same to Nora but was foiled by Saldo. Unfortunately, the rape incident drove Sofia to give up her relationship with Saldo. That explosive and riveting scene between the two, when Sofia decided to call it quits and Saldo's sudden outburst, can be viewed on the clip below.

Hell broke loose in the end as Saldo, Sofia and Bert met in a final confrontation. From the pages of Pilipino Komiks, you can read that concluding part below--- 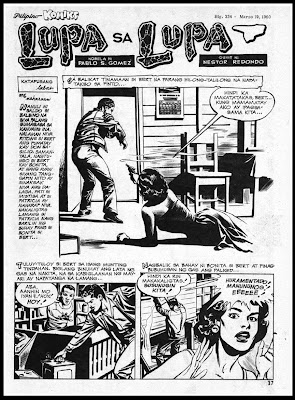 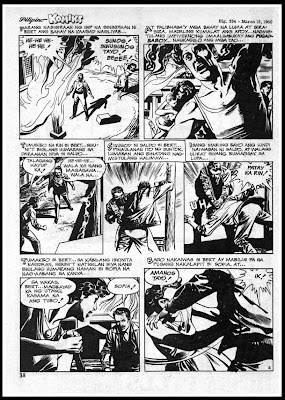 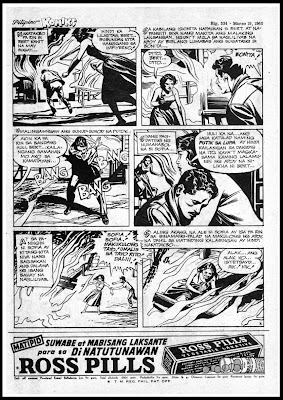 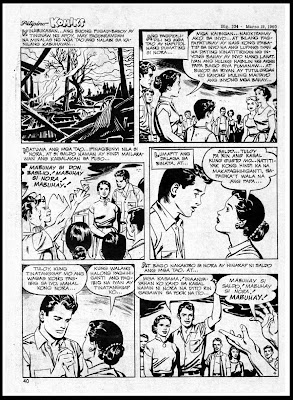 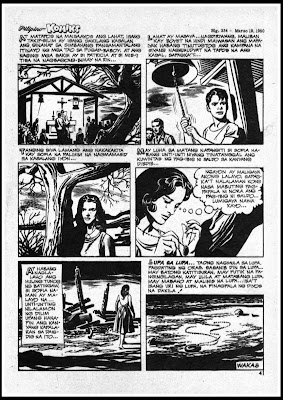 Simon,
Tense, dramatic scenes between the protagonists. Luis Gonzales, never really considered by critics to be a dramatic actor delivers.

JM,
That scene with Gloria and Luis Gonzales going down the steps looks like the gardens in the Sampaguita compound. Remember how I described the compound as sloping downhill with multi-level gardens?

Simon,
Let me qualify that statement I just said about Luis Gonzales. "Luis Gonzales was never really considered a GREAT dramatic actor." After all most of his roles were drama, and mostly involving Gloria Romero and Lolita Rodriguez, with some comedy and action in between. But I don't think he's won any award for acting (compared with say. Eddie Rodriguez), or has he?

You're right, Rod. Luis Gonzales never won any award, however he was nominated several times--- "Alaala Kita" and "Talipandas" in 1958; Iginuhit nga Tadhana" in 1965 and "Pinagbuklod ng Langit" in 1969.

Yes, that looks familiar, but in the 1970s, the foliage are not as robust. In fact, it looked like as if the garden was totally neglected and maybe the reason why it didn't challenge my imagination.

I think Luis Gonzales' downfall in the acting department is his facial expression, and his not very tall physique. He actually had a smiling face in his youth. Though I'd say that his biggest asset was his voice. The tone was low and relaxed, and the diction was extremely clear. He's one actor I don't need to see the face, all I need is to hear his voice and I'd know it was him. His voice was that unique.

I think Luis Gonzales' downfall in the acting department is his facial expression, and his not very tall physique.

JM,
I wonder if physical height really has something to do with acting. Indeed, some of our best actors were tall, Eddie Garcia for example is 6'2". Of course with U.S. actors, height does not matter (both Marlon Brando and Paul Newman were not very tall), what is important is going through a process of learning, as in drama school, and British actors go through a wringer too, Shakespearean training. We don't have any drama school in the Philippines, so our actors are mainly self-taught.

And I noticed the poster for the movie shows Luis Gonzales as the tallest with Lolita Rodriguez, just a bit shorter and Gloria Romero, the shortest. In reality, Gloria is about 5'9" and probably taller than both Luis Gonzales and Lolita.

Holy cow. I tried posting my mesage, I erased it?

Actually, in theater, it is fatal to have the following:

Body and voice are the tools of an actor. In order to capture the audience's attention on stage, being tall is a must. Having a bigger face is very important for it will give you more visibility, and the voice projection is crucial, so that even the last audience sitting in the very back of the theater would hear you.

Rosa Rosal is a fantastic actress, but she's got a small cute face. Onstage, that is very disadvantageous. It will be difficult for the audience to see her facial expression. Whereas, the movies use close up, and that does wonders for a beautiful face, like hers, small and very cute. I've met Mr. John Travolta here in Vancouver, and I was so surprised to find out HOW HUGE is face is! He would be a great stage actor, not because he has a big face, but because he's such a fine performer and tall as well. Of course proof of this was his gait in Saturday Night Fever. That walk defined his generation.

The movies, however, is very forgiving. But if you're the leading man and you end up shorter than your leading lady, then it robs the cinema of its so-called BIGGER-THAN-LIFE quality. Hence, in Hollywood, the directors would make ALLAN LADD stand on an orange crate to make him taller than his leading ladies.

Brando, Pacino and Hoffman got away with their short heights because they played character roles most of the time. But, if you're playing the roles played by ROCK HUDSON (the romantic boy next door), you just gotta have the qualities of a dream boat.

In the case of Luis Gonzales, if Doc Perez made him more of a character actor, he probably would have been a better actor because his personality would have fitted his roles better. Besides, Luis looked much better in person than in the movies; while many actors look better in the movies than in person. One of these actors was a guy named Zandro Zamora. He was so photogenic that despite his so-so acting ability, he was able to steal the scene with the one and only, Miss RITA GOMEZ and Gloria Romero in a film called AVENIDA BOY.

James,
Thanks for the vote, hahaha, but JM is the better critic and writer. I just tell the way it was. And BTW I got that "Pretty Boy" message. Indeed now it's more clear in my memory, that was the movie. I was kind of walking alone towards the Sampaguita gate, when I saw the shooting in front of the Vera-Perez gate. I just kept to the side, the street was empty, nobody else was there, it was a quiet residential neighborhood. Only Romeo Vasquez and Amalia Fuentes were there, with the cameraman and I guess the director. The scene was quite short, not much dialogue between the two stars, and one take was enough (or was it two?), after which, they all went inside the gate. The Susan Roces footage must have been shot elsewhere as I didn't see her. Simon, any chance of a clip from that movie and particularly the scene I was talking about, where Romeo Vasquez bumps Amalia?

JM,
Good pointers. I saw Dustin Hoffman in person, just hanging around with his little daughter (presumably or grand daughter) at UCLA's Royce hall after an evening event. The little guy was a squirt, hahaha. I was taller than him. But he does have at least two qualities in your list, a great voice and facial expressions. In movies they tend to do more closeups and facial expression is definitely crucial. Luis Gonzalez' voice reminds me somewhat of Vincent Price, who had all the qualities you list, great build, a distinctive bass voice that will melt you down. I guess that's what made him a great horror actor. One actor who's stentorian voice really made him was Charlton Heston.

Auggie,
Yes both Pacino and especially Hoffman are short. Pero, hindi ka maniniwala dito: that great American (he was actually Russian) hunk, we remember in movies like Spartacus, Gunfight at OK Corral, Kirk Douglas is short too. I'm 5'6" and I was standing next to him at his autobiography book signing, and I was taller. Well, of course, this was when he was an old man and had a debilitating stroke. I can only guess that he shrunk, because he seemed like a big man to me in his movies.

I've also seen Clint Eastwood, at a health food store here where I was shopping also, and he is big and tall about 6'4" I think.