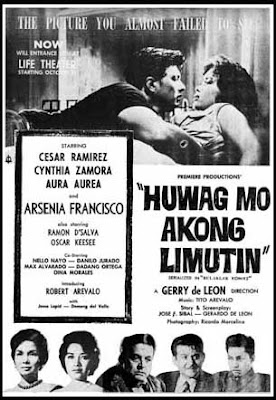 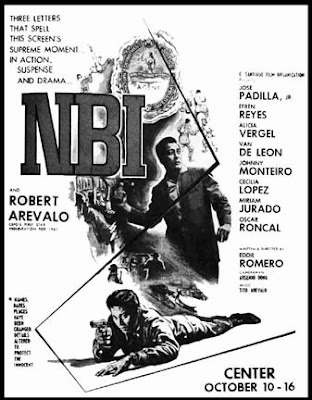 Left- "Huwag Mo Akong Limutin" (1960)- Stars Cesar Ramirez, Cyntia Zamora, Aura Aurea and Arsenia Francisca/ with Ramon D' Salva, Oscar Keesee, Nello Nayo, Danilo Jurado/ Introducing Robert Arevalo / Directed by Gerry de Leon
Right- "NBI" (1961)- Stars Jose Padilla, Jr., Efren Reyes, Alicia Vergel, Van de Leon, Johnny Monteiro, Cecilia Lopez, Miriam Jurado, Oscar Roncal and Robert Arevalo/ Directed by Eddie Romero
Acting runs in his blood. Robert Arevalo, an A+ and multi-talented actor, comes from the Ylagan clan. Award-winning director and National Artist Gerry de Leon is his uncle. The famous Tito Arevalo, a movie actor in the 1940’s and a musical scorer, is his father. Angel Esmeralda, also a movie actor and the father of Jay Ilagan, was his uncle. Liberty Ilagan and Jay Ilagan, both famous movie stars, are his cousins. Arevalo made his movie debut in 1960 in Gerry de Leon’s “Huwag Mo Akong Limutin.” He was tapped to star in a major role in two relatively unknown movies early in his movie career--- "NBI" (1961) and "Panginoon" (1962). His biggest break was in 1965 for the movie “Ang Daigdig ng Mga Api,” for which he won the FAMAS Best Actor Award, together with his wife, Barbara Perez, who won the Best Actress trophy. In all, "Daigdig" got a total of 8 awards, including Best Picture and Best Director for De Leon. He was also best remembered in other two De ’s award-winning epic masterpieces, “Noli Me Tangere” (1961) and “El Filibusterismo” (1962). 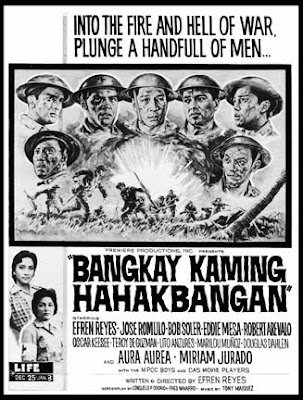 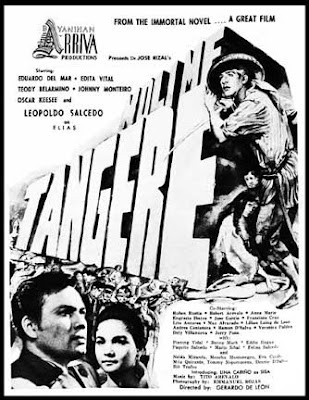 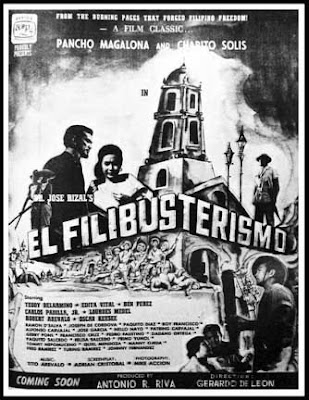 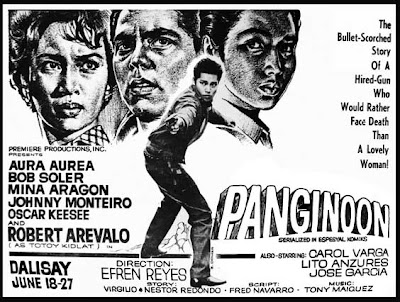 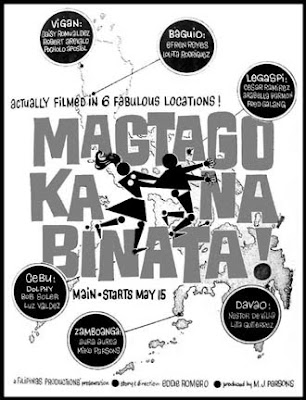 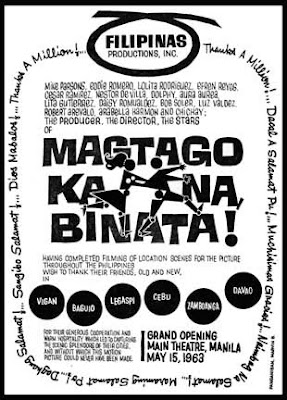 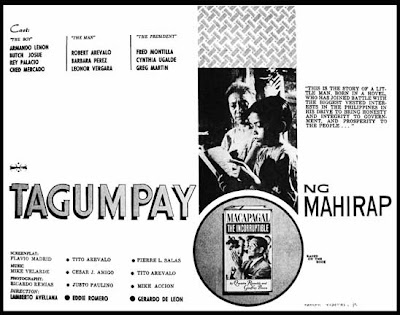 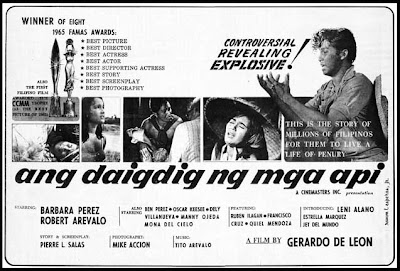 I have seen this DAIGDIG NG MGA API, another powerful film from Gerry de Leon. Arevalo was quite good here, and the surpise package was a new actor named JET DEL MUNDO (son of writer Clodualdo del Mundo Sr). However, despite his fine performance, he was never seen again in any Tagalog films.

JM, was 'Daigdig' based on the life of President Diosdado Macapagal? There was an article written that it was, but I think it's 'Tagumpay ng Mahirap.'

You're right, Tagumpay ng Mahirap was Macapagal's story. It was , in reality, a propaganda film, but you would never notice it by the way it was presented.

Though it's true that Macapagal was one president who made the Philippines second to Japan in economic growth during his regime. He also never used nepotism in his government. Pretty good guy, I must say. Maybe it was the reason why many people was hoping that GMA will do the same thing... but she didn't.

Hi! I'm Anna, Robert's daughter. Where did you get all these posters? Would you know where I could get a copy of any of these films as well as those of Lolo Gerry De Leon? Thanks! :)

He is the uncle of Lorna tolentino and jay ilagan are both cousins as well as liberty ilagan they are relatives was once played Jose Rizal in tv/movie and biopic story and screenwriter actor and popular veteran of Filipino movies was hosted balintataw a mystery/horror/suspense anthology series aired on channel 5 from 1967-72 tv series then revived since the late 1980's and a possible comeback to tv5 hosted by Ryan Agoncillo as host in a revival of classic tv series equivalent of twilight zone or outer limits and next step beyond combined in one tv drama.and remains a classic tv show thanks!from:Wayne