FROM 'SAN SEBASTIAN' TO 'SANTA VITTORIA'

I am a big fan of this great actor. I remember seeing him for the first time, as a member of a daring commando team assigned to destroy a huge German gun emplacements at Navarone in a 1962 war epic, The Guns of Navarone. He was at his best in such foreign film classics like La Strada (1954) and Zorba the Greek (1964). He was even great as an aging boxer in Requiem for a Heavyweight (1962). I admired him more in Viva Zapata (1952), Warlock (1959) and Lust for Life (1956). I was referring to the late actor Anthony Quinn, a two-time Academy Award winner for Best Supporting Actor.Two of his movies I also like and owning: Guns for San Sebastian (1968) and The Secret of Santa Vittoria (1969). I got the chance to see these movies in the late 60s at the newly opened along . 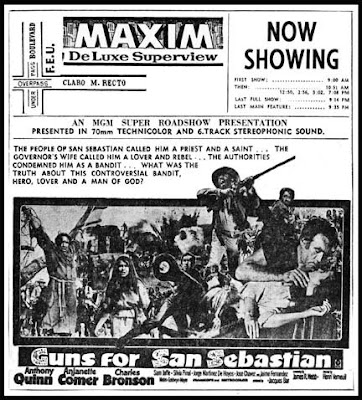 Anthony Quinn plays the role of Leon Alastray, a fugitive rebel who disguises as a priest . He manages to unite and defend the poor Mexican villagers and defeat the marauding Yaquis (led by Charles Bronson). This is one movie that should have long been released on dvd but still it has not been done. One great movie worthy to be kept by movie enthusiasts. 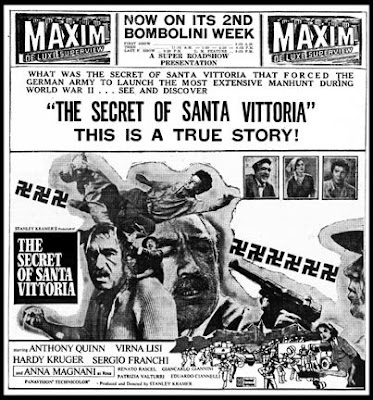 The Secret of Santa Vittoria (1969)
I saw this film in 1969. Though overlong, it still funny and entertaining. The setting is in a small Italian village during World War II. The village, known for its wine, is celebrating the overthrow of Mussolini's government. The villagers arrest the local fascist officials and elect a drunken wine merchant Bombolini (Anthony Quinn) as mayor. Soon, they learn that the Nazi will be coming to occupy their town and will be confiscating the wine. Bombolini must now face to the herculean task and challenge of protecting their 'treasure' --- over a million bottles of special wine.

I think many old movies are not on DVD yet because a big chunk of these old films are now owned by Turner classics. Many black and white were colorized (Blasphemous!) and there are two cable channels of Turner classics running daily 24 hours showing different films all day. They probably want to make more income from them first via commercial revenues, then might be destined for DVD later. Some of these Turner Classics are absolutely old you can't find them anywhere but on TMC and Movie Channels. However, the best place to see old classic on the big screen is THE BIG J CINEMA in downtown Sacramento, Cali. Every time I visit Sacto, I made sure I go and see an old movie there :)

And for nostalgia, we still have one (probably the last one in north America) DRIVE-IN THEATER in the suburbs of the Vancouver lower mainland, called ABBOTSFORD. In the 80s before drive in bid farewell for good, this was the home of Gerardo de Leon and Eddie Romero horror flicks, specifically, the MAD DOCTOR horror series, starring of course Philippine "adopted" teen heartthrob, John Ashley. And naturally, there will be no internationally released Filipino horror films without VIC DIAZ and EDDIE GARCIA in them :)

ANTHONY QUINN was an "all out" type of an actor, something very similar to the acting of our very own, Charito Solis. Honest, no holds barred, and the-devil-may-care head on approach to tackling a role.

For some reason, it seemed that Quinn was even bigger than life when DAVID LEAN is on the helm, like say, in the case of LAWRENCE OF ARABIA. A fantastic director + fantastic actor = UNFORGETTABLE FILM.

sir anthony quin did the spoken lines on the song...AND LIFE ITSELF WILL LET YOU KNOW...with a young boy singer called charlie.

this is a poignant song back in the 70s retelling the rites of life to his son...