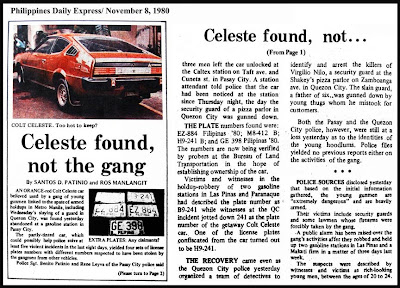 In the late 1980, a group of young notorious crooks known as the “Celeste Gang” was responsible for the numerous armed holdups and violent incidents in Metro Manila. The initial reports described the suspects as rich-looking young men, between ages 20 to 24 and using a Colt Celeste car as their getaway vehicle.

At least 17 holdup, carnapping and gun snatching incidents in Metro Manila believed pulled by this group with the use of illegally-acquired guns. A Northern Police District official initially attributed to the gang nine cases in including the killing of a 30-year old guard of Shakey’s on . 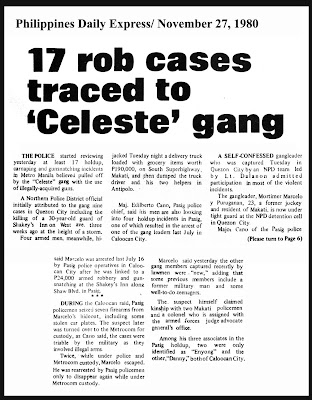 (click image to enlarge)
The case was considered solved with the arrest of their leader, Mortimer Marcelo y Purugunan, a self-confessed gangleader, who was captured Tuesday, November 25 in by NPD team led by Lt. Dalanon. Marcelo, a former jockey and resident of , admitted participation in most of the violent incidents.

A movie was made in 1985 with the young action star Ramon ‘Bong’ Revilla, Jr. in the lead role. 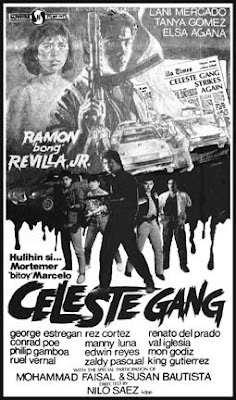 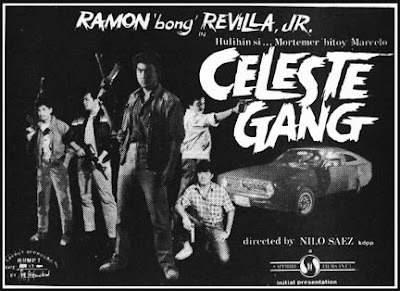 The leader of the gang (I must admit) was my cousin. 'Bitoy'(as what we call him)a short but stocky guy was a silent type of guy. He never talks unless spoken to and often isolated in one corner, sitting. Though as cousins, we're never had a close family relationship as we only see each other every Christmas since our family always pays a visit to their house in Antipolo Street, Makati during holiday season.I never imagine that he was the leader of that notorious 'Celeste Gang' until I saw him during his funeral service.

During that time, the families admitted, that he (Bitoy) would end up like as what had happen to him since he was such a difficult young man to handle by his parents. However, what we could not accept is the fact that his wife, Pia (who was pregnant at that time) was also killed during the shootout (as the Police claimed).Pia, an Accountant is due to leave the country to accept a job offer abroad at the time she was killed together with Bitoy.

Sometimes, it is the law enforcer's 'shoot first - ask question later' mentality is what makes them worst than the criminal they killed.

Hello! I am trying to get a copy of this film, with English subtitles. Can you direct me to a source for this?
please contact ayaire@gmail.com

hi guys.. im tryin to search "celeste gang" on youtube but i cant find it.. can you pls direct mo to the movie.. thanks

bitoy's mother wants to have a copy of this movie.. she is still alive and still remembers bitoy..

My biological father is still alive and he is one of the Celeste gang.