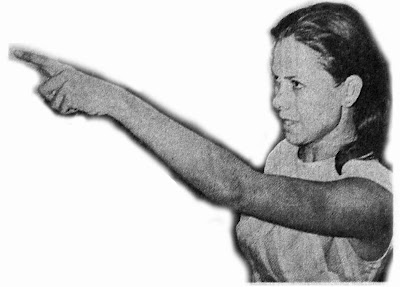 Magdalena T. de la Riva, popularly known as Maggie de la Riva (b.1942) is a Filipino movie actress, who has appeared in about 40 films. She is best remembered for that unfortunate and regrettable incident in 1967 when she was abducted and raped by four young men coming from rich and influential families. She pursued the case relentlessly against her abductors sacrificing her career, image, privacy and facing public scrutiny and humiliation. As a result of her amazing and extraordinary courage, her rapists were sent to jail and eventually executed by electric chair in May 1972.

Here's that initial news account of that incident--- from the front page of the Manila Times dated June 3o, 1967--- 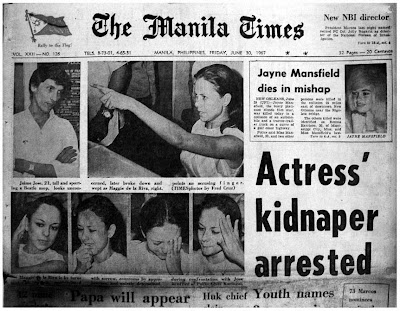 Frail- looking movie star Maggie de la Riva, crying and trembling in rage, flung these accusing words at the young man when they met in the office of Quezon City Polive Chief Tomas B. Karingal at 7:20 last night. 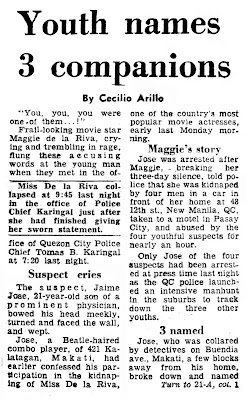 The suspect, Jaime Jose, 21-year-old son of a prominent physician, bowed his head meekly, turned and faced the wall, and wept. Jose, a Beatle-haired combo player, of 421 Kalatagan, , had earlier confessed his participation in the kidnapping of Miss de la Riva, one of the country’s most popular movie actresses, early last Monday morning.

Jose was arrested after Maggie, breaking her three-day silence, told police that she was kidnapped by four men in a car in front of her home at , New Manila, QC. Taken to a motel in , and abused by the four youthful suspects for nearly an hour. Only Jose of the four suspects had been arrested at press time last night as the QC police launched an intensive manhunt in the suburbs to track down the three other youths.

Jose, who was collared by detective on Buendia ave., , a few blocks away from his home, broke down and named his companions as “Boy” Pineda, said to be the son of a businessman; Eddie Aquino and a certain Roger. With Jose’s confession, given before Capt. Ernesto San Diego, chief of detectives, and Capt. Leonardo San Jose, assistant chief, police last night readied a complaint of kidnapping with rape against the four. The charge carries the maximum of death. Although Jose admitted his part in the kidnapping, he at first denied having assaulted Maggie.

When he and the actress were brought face to face before Karingal, Jose sprang to his feet and pleaded softly: “Maggie, Maggie, please… Hindi ako kasama. Magsabi ka ng Totoo.” (I wasn’t one of them. Tell them the truth). But the girl, who had entered the room with her lawyers and detectives, looked at the youth stonily, softly sank into a chair and cried uncontrollably.

She stood up and, failing to scratch the youth’s face, spat out the words: “You, you, you were one of the boys who pulled my legs and raped me!” The suspect turned pale, faced the wall and cried. The confrontation took place after Jose executed his written confession.

Jose was nabbed at 2 p.m. yesterday while he was walking along Buendia ave. and reading yesterday’s Daily Mirror which headlined Miss de la Riva’s story of her ordeal at the hands of four young men riding in a red convertible. The youth was collared by two detectives --- Pablo Pascual abd Ricardo Aniceto --- who, disguised as ice cream vendors, had placed Jose’s home under surveillance since 6 a.m. yesterday. The suspect, however, at first tried to deny he was Jaime Jose. When he failed to convince the sleuths, he broke away and tried to escape. As he was abou to turn around a corner, however, another detective, Reynaldo Roldan, armed with a Thompson submachinegun, blocked his way. The youth stopped in his tracks, covered his face with his hands and pleaded: “Huwag ninyo akong saktan. Ako nga, ako nga. Sasama ako, sasama ako.” (Please don’t harm me. I’m the one, I’m the one. I’ll go with you, I’ll go with you). Two police jeeps, which had parked nearby earlier in the afternoon, drove in and picked him up, whisking him away to QC police Precinct 5 to avoid the crowd that had gathered at the police headquarters where Maggie de la Riva had told her story.

Before she was brought face to face with Jose, Miss De la Riva was taken to the NBI headquarters at 4 p.m. yesterday for medical examination. Police sources said the examining physician, Dr. Ernesto Brion, assistant NBI medico-legal division chief, confirmed the actress’ story that she had been criminally attacked by four men. “”They took turns in abusing me,” she had told Police Chief Karingal. 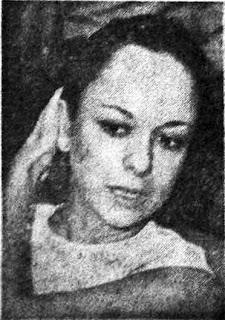 The actress had been in a state of shock since her ordeal last Monday. At first, she refused to file any complaint, saying that the men had really not done her harm and that she had been threatened if she talked. Yesterday morning, however, she changed her mind, and accompanied by two lawyers --- Bienvenido Benitez and his wife Regina, both private practitioners--- she went to police headquarters to file her formal complaints.

Miss De la Riva said the suspects had threatened to kill and mutilate her --- “like Lucila Lalu,” she quoted them as saying --- if she went to the police. They had also allegedly threatened to disfigure her by throwing acid on her face. The actress was kidnapped by four men as she was about to step out of her home at 4 a.m. last Monday. She had just come from the ABS studio, where she had a video tape-recording session last night, with her maid Elena Calderon.

She disappeared for two-and-a-half hours. When she showed up again on Gilmore st., she looked as though she was in a state of shock, her hair disheveled. Policemen who had been summoned by her family could not get any word from her. A private physician said he could not talk well enough because of her ordeal.

In his confession, Jose said Boy Pineda, Eddie Aquino and Roger went to his house in to borrow his red convertible at about 11 Sunday night. Not wanting to lend his car without his being with the group, he said he decided to tag along.

They went, he said to the Ulog Coctail Lounge on A. Mabini st., Ermita, where they had several rounds of drinks until about 3:30 a.m. Monday. While drinking, Pineda started talking about Maggie de la Riva, Jose told police. Pineda reportedly said he was “in love” with the movie star. Jose said Pineda even knew the actress was scheduled to have a vide-taping session at the ABS studio. 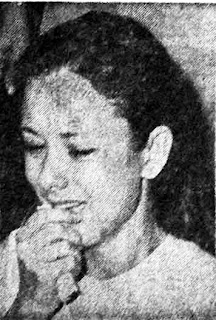 From the Ulog, he said, the group went to the ABS studio where Pineda and Roger allegedly tried to talk to the actress. Miss De la Riva, who later said she did not know the men, apparently snubbed the group and drove off her bantam car with her maid Elena. Jose said Pineda decided to give chase. They followed the actress’ car up to 12th st. in front of her bungalow in New Manila. As the girl stopped her car and was about to step out, Pineda who stopped the beside the actress’ bantam, also got off and grabbed Maggie, dragged her into the car’s backseat. Jose said Maggie was placed between him and Aquino.

On Broadway, a few blocks away, Pineda stopped the car and blindfolded the actress with a handkerchief. When she again struggled and tried to shout, he allegedly struck her again and again in the stomach and thighs with his fists. Miss De la Riva said she was stunned and when she came to, they were in the motel. Jose identified the motel as the Swanky Motel on Taft ave., near Cartimar, Pasay Cty. He said Pineda owns the place. Policetagged Jose as the one who hailed a taxicab and escorted Miss De la Riva back to Quezon City from Pasong Tamo, Makati.

Miss De la Riva finished high school at in and a two-year secretarial course at St. Theresa’s College. The movie star’s father, Juan de la Riva, 58, died in 1964. Her mother, Pilar Torrente de la Riva, is keeping house for the actress who is the sole breadwinner of the family.

Jose, the suspect, finished high school this year. He reportedly is a member of a gang molesting starlets and hostesses. Some of the victims, police investigators said, did not denounce them to the police to avoid scandal and for fear of reprisal by the gang.

To know more of the case, see the link below
Supreme Court Decison

Some of Maggie's movies: 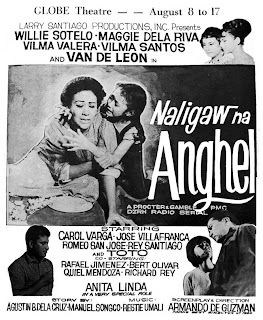 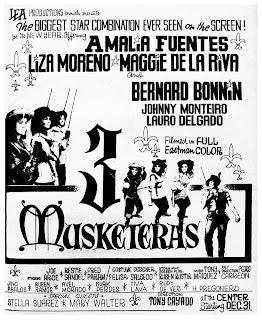 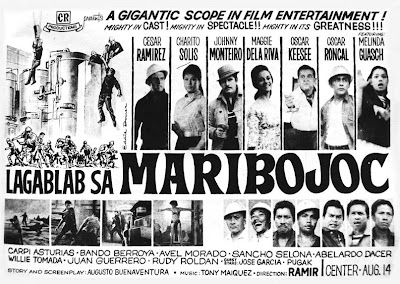 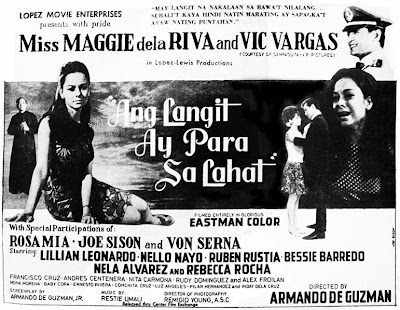 In 1994, her story was made into a movie produced by Golden Lion Productions under Carlo J. Caparas direction. 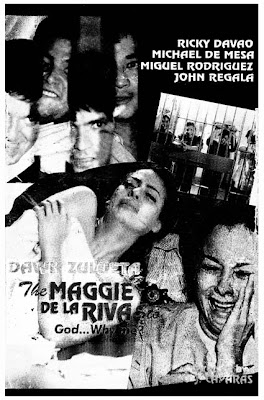