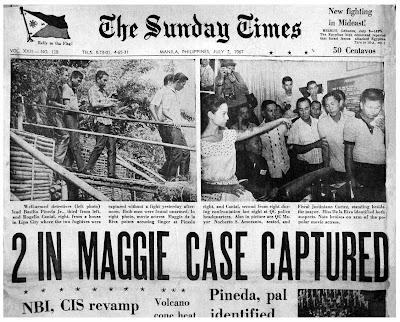 Two more suspects in the kidnapping and rape of popular movie star Maggie de la Riva were captured without a fight in at 4:30 p.m. yesterday. The two--- Basilio “Boy” Pineda, Jr. and Rogelio “Roger” Canial--- were positively identified by Miss De la Riva when they were brought face to face at the police headquarters at 7:45 last night. 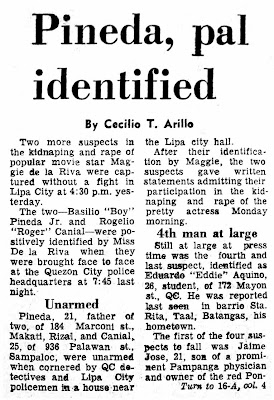 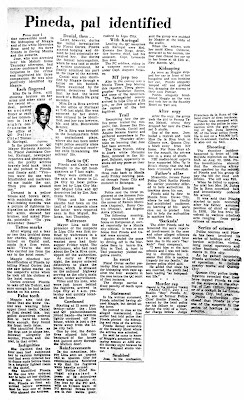 Pineda, 21, father of two, of 184 Marconi st., Makati, Rizal, and Canial, 25, of 936 Palawan st., Sampaloc, were unarmed when cornered by QC detectives and Lipa City policemen in a house near the Lipa city hall. After their identification by Maggie, the two suspects gave written statements admitting their participation in the kidnapping and rape of the pretty actress Monday morning.

Still at large at press time was the fourth and last suspect, identified as Eduardo “Eddie” Aquino, 26, student, of 172 Mayon st., QC. He was reported last seen in barrio Sta. Rita, , Batangas, his hometown.

The first of the four of the four suspects to fall was Jaime Jose, 21, son of a prominent Pampanga physician and owner of the red convertible used in the kidnapping of Maggie and of the white Mercedes Benz used by his three friends in fleeing and the suburbs. Jose, who was arrested near his home Thursday afternoon, had earlier confessed his participation in the crime and implicated his three companions. He was also positively identified by Maggie.

Miss De la Riva, still showing bruises on her arms and other signs of her recent ordeal, pointed an accusing finger at each of her tormentors in last night’s confrontation in the office of QC Police Chief Tomas Karingal. In the presence of QC Mayor Norberto Amoranto, Fiscal Justiniano Cortez, Karingal, newspaper rporters and photographers, the pretty actress bravely held back tears as she pointed to Pineda and firmly said: “You…you were the one who blindfolded and malteated me inside the car. Then you also abused me.” Dressed in a yellow blouse and brown skirt, with matching shoes, the frail-looking mestiza was a picture of righteous indignation as she extended her arms, showed her bruises, and asked Pineda, pointedly: “Do you remember these?”

After wiping out a tear or two that trickled her cheeks, Maggie then turned on Canial and again in a firm voice, said: “You’re the one who carried me from the car to the hotel room.” Maggie clinched her identification of Pineda by telling Fiscal Cortez that she saw tattoo marks on the suspect’s arms when he took off his clothes at the hotel room. Cortez ordered Pineda to take off his t-shirt, and sure enough he had tattoo marks on his arms.

Maggie also told the fiscal that she knew Canial was wearing false upper front teeth. Canial at first denied this, but police detectives ordered him to bare his teeth. Sure enough, they found his front teeth false. She identified Jose as the first one to abuse her, followed allegedly by Aquino, Pineda and Canial, in that order.

She claimed that the four men had subjected her to various indignities and had even ordered her to dance nude before them in a brightly lighted room in the motel. She identified Pineda as the one who ordered her to take off her clothes. Before the confrontation, Pineda at first admitted before newsmen that he was one of those who abused the actress.

Later, however, during the initial investigation by Fiscal Cortez, Pineda started hedging and denied he had criminally assaulted her. But during the formal interrogation, when he was told to make a written statement, he finally admitted his part in the rape of the actress. Canial was also identified by Maggie through a tattoo on his buttock. When examined by the police, detectives found that he had the tattoo mark of a Bahala Na gang member.

Miss De la Riva arrived in the office of Karingal at 7:45 last night. She was escorted by her sister, who refused to be identified, and her two lawyers, Mr. and Mrs. Bienvenido Benitez. De la Riva was brought to the headquarters from an undisclosed place, where she has been under police security since her family started receiving calls threatening the actress’ life.

Click the image above for the rest of the article--- 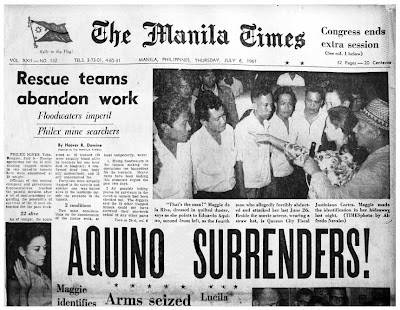 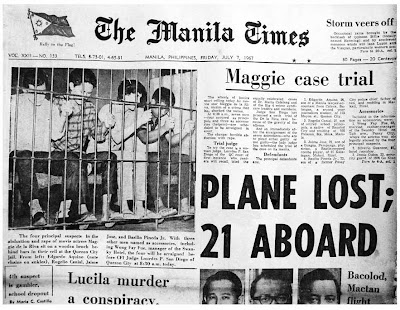 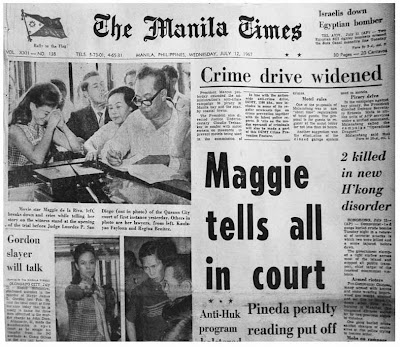 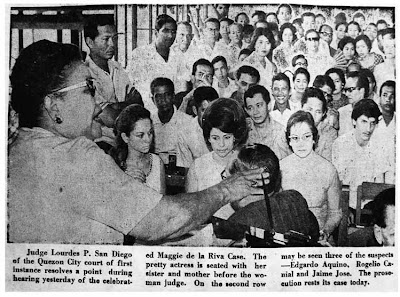