Character actor and Philippine cinema's bad guy, Arturo 'Bomber' Moran reminded me of Bud Spencer, the chubby and lovable actor who played alongside Terence Hill in several movies. Though Bomber appeared in numerous action movies as the mean evil guy, he also did some movies similar to Bud Spencer-Terrence Hill films, but in tandem with different stars. 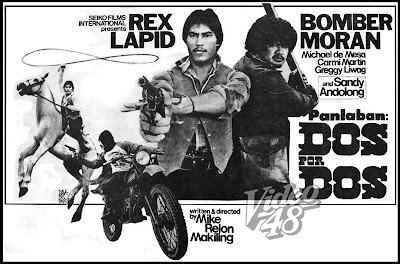 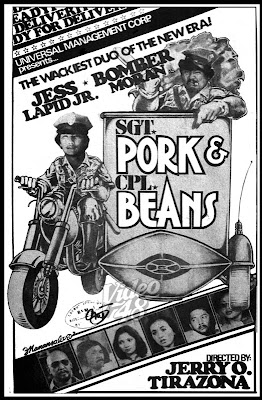 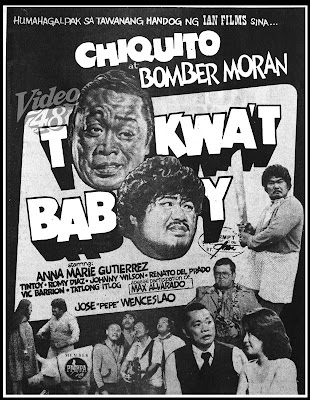 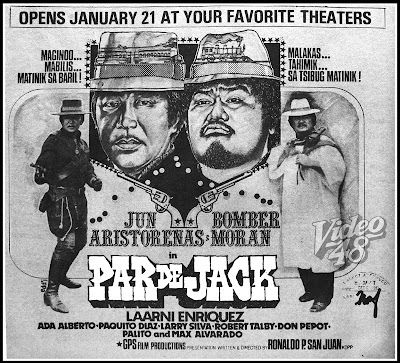 Thanks so much for posting this stuff. Bud Spencer is one of my all time favorite actors. I feel very happy he is also known in the Philippines & there was a pinoy Bud Spencer!!!!

Hi Jesus, you're absolutely right about the similarity between the Sgt Pork and Crimebusters posters. It has to be deliberate; from what I can gather there was a sizeable audience for Hill & Spencer in the Philippines, and a film from the early 70s, "They Call me Trining", even references the Trinity films!

I am very happy to know Bud Spencer was popular in places like Philippines, Japan and even Hong Kong. Jackie chan has admited more than once he was influenced by Spencer& Hill action comedies.

You may laugh at me but my second baby's name is Carlos, a homage to Bud Spencer real name Carlo Pedersoli. I swear is true. I am a devoted fan to bud Spencer because his movies were my medicine in time of sickness & depression.

These Bomber Moran movies are not available commercially.

It is a pity they are not commercially avaliable, Bud Spencer movies are still very popular and marketable in all around Europe. There is no a european country that has not them on DVD or tape...Maybe this action comedies starred Moran could still be very nice to young people in the Philippines.

but...do you know if there are still copies on 35mm or are they gone forever?

Mr Santos, do you have a art cover, poster or whatever about Call Me Trining???

Hi Jesus! Sorry, I don't have the movie ad or poster of "They Call me Trining." I remember a movie titled, "Trinidad is my Name."

Hi Simon and Jesus, it turns out we're both right - there are in fact two Pinoy films from the Seventies which parody the Trinity brandname:

By the way, Simon, the text file for my Philippines Filmography is now almost 600 pages! 1966 to 1976 are now complete, and the remaining years to 1989 are half done. At the moment I'm transcribing complete credits from FPJ, Lito Lapid and Rudy Fernadez films..what a Hurculean task!!!

Thanks Andrew! You're doing great service to Philippine cinema. If you need some info or data on some movies, please let me know.

My question is are most of these movies from 1966 to this day preserved on 35mm, tapes, vcd, dvds or are they gone forever?

I make this question because whenever I go to a video shop or video rental in the Philippines I can only find new releases. Searching from movies from the 80's or before is almost an impossible target: only Fernando Poe's, Sharon Cuneta'sdramas are avaliable.
Even the actioners Ian Veneracion played in the middle 90's are hard to find on VCD!!!

Hi... that was great stuff.. I really like reading on this subject Could you tell me more on that... I love to explore

there was an actor named arturo moran in the 50's til 80's who looks like bomber moran. are they one and the same person?