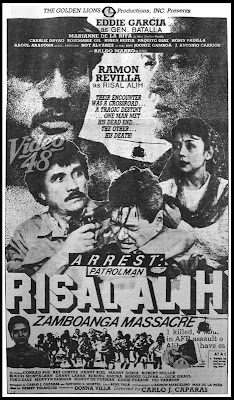 Zamboanga City--- On Jan. 5, 1989, Brig. Gen. Eduardo Batalla, then commander of the Philippine Constabulary in Western Mindanao, and his chief of staff Col. Romeo Abendan, along with five other people, were taken hostage by discharged policemen and soldiers in Batalla’s own office at the Recom-9 headquarters in Cawa-Cawa, Zamboanga City.

The hostage-takers were led by rogue cop Rizal Alih, who, along with the group numbering about seven, had been ordered to report to Batalla’s office in connection with the killing of seven persons in 1984.

During the meeting, Alih was told that he and his men would be detained—himself in Camp Crame and the rest in Zamboanga City.

An angered Alih drew his firearm and a brief firefight ensued, leading to the hostage-taking.

Members of the Marine Corps subsequently surrounded the area, but Alih, shouting over a megaphone, threatened to kill the hostages if government troops attacked.

He demanded to talk with then Sen. Santanina Rasul, a relative of his, and then Defense Secretary Fidel V. Ramos. Ramos refused to go.

At around 7 p.m., Rasul and then Speaker Ramon Mitra arrived at the Recom-9 headquarters to negotiate for the release of the hostages. Mitra offered to take Alih under his protective custody in Palawan. But Alih laid down two more demands—two helicopters to fly him and his men out of the country and the immediate removal of all Christian soldiers from the area.

The military formed an assault team with Brig. Gen. Braulio Balbas as commander. Balbas ordered that the area be cordoned off, and gave Alih until 1 a.m. of the next day to resume negotiations. By this time, a big number of armed Moro soldiers had slipped into the camp and joined the hostage-takers.

Alih called for another meeting with Mitra and Rasul. After hours of negotiations, he agreed to release the hostages at 3 a.m. But when Mitra emerged, he said he had seen blood leading to the bathroom where Batalla was being held. He said he had insisted on seeing the hostage and was not allowed to do so.

Balbas also asked to see Batalla, but at 7 a.m. the next day, the request had yet to be granted.
In the afternoon, the military announced that the government was sticking to Mitra’s offer. But Alih threatened to kill the hostages if no fresh negotiation was held by 4 p.m.

Alih’s failure to show Batalla shortly after 4 p.m. heightened speculation that the general had been killed, prompting military troops to launch an attack. The exchange of gunfire lasted for four hours.

Another attack was mounted eight hours later, and the battle raged through the night until the next morning.

When the smoke cleared, 19 people were found dead.There was no official identification of the charred or mutilated bodies. But the remains of Batalla and Abendan were later recovered. The military also announced that seven of the hostage-takers were among the dead.

Alih, however, managed to escape and to slip out of the country and into Malaysia.

In 1994, he was arrested and jailed in Malaysia for illegal possession of high-powered firearms.
In January 2006, after serving eight years in prison, Alih was deported back to the Philippines, where he now faces murder charges for the 1989 siege.

How can I get hold of this film?
Is it available in DVD?