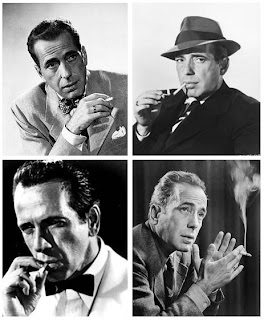 The cancer had spread to his lymph nodes. His treatment included a nine hour surgery to remove the tumor, two lymph nodes, and a rib. The surgery was followed by a course of chemotherapy.

At first, Bogart seemed to respond to the treatments but after 6 months the cancer recurred and he underwent radiation therapy.

Unfortunately, Bogart could not fight the cancer and he fell into a coma and died at home on January 14, 1957 at the age of 57.

His last words: "I never should have switched from scotch to martinis.” 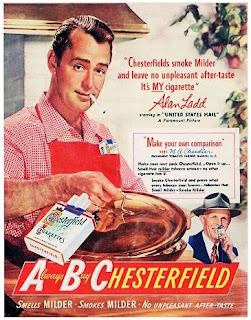 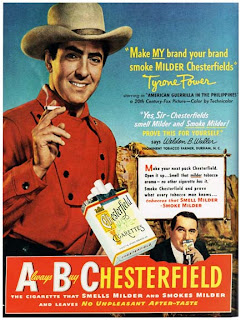 In the 50’s, top Hollywood stars like John Wayne, Henry Fonda, Humphrey Bogart and Lauren Bacall, Lucille Ball and Desi Arnaz, Tyrone Power, Alan Ladd were some of the popular endorsers of famous cigarette brands like Chesterfield, Camel, Philip Morris, Marlboro. Would you believe that even doctors and babies were also endorsers of such brands during that time? Take a look on some of 50’s cigarette ads, when advertised today, would have been a subject of public scrutiny and widespread protest. 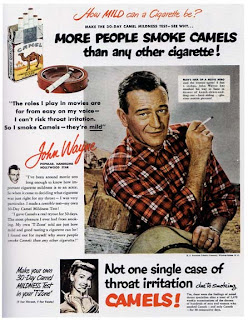 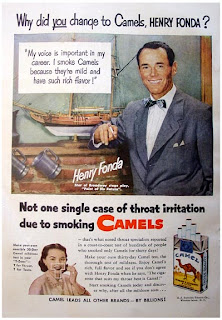 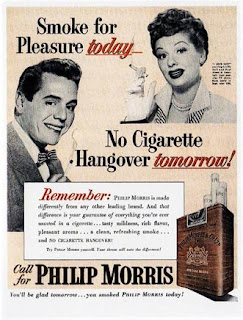 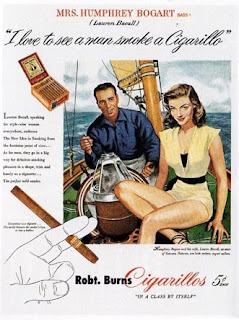 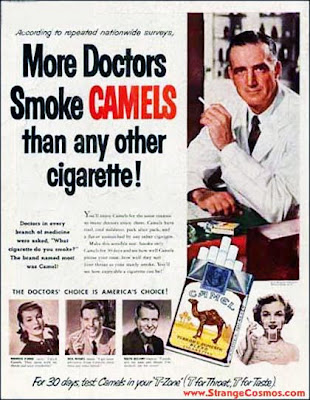 Effective July 2008, cigarette ads and sponsorships will be banned in the .

According to Limpin, the ban does not affect areas considered as "point-of-sale establishments." Letters have already been sent to an inter-agency committee that will notify affected sectors about the ban.

No tobacco ads will be allowed to be published in newspapers and any other publication. Tobacco firms will also not be allowed to sponsor any sport, concert, cultural art or event. In the same manner, individual or team athletes, artists and performers are not allowed to include any cigarette or tobacco company in their sponsorships.

Law violators will pay a fine of 100,000 pesos ($2,236) or one year imprisonment for the first offense. Fines will double on the second offense. A fine of 400,000 pesos and imprisonment of not more than two years will be the penalty during the third offense.

Any official from any firm found violating the ban will be held liable. The company's permit to operate will also be revoked. see Link

Thanks again for these Retro Print Ads ! my favorite cigarette ads were the ones done by BOB PEAK, illustrations done in acrylic. Do you happen to have those ones ? he also did the 7UP series, the Westside Story movie poster, Camelot, Excalibur etc.

Those vintage ad posters are a gem. Such advertising efforts, I'm sure, were instrumental in getting both my parents into smoking. Glad I was able to kick the habit!

I'll research on that Auggie. I have to post another retro ads to accommodate your request. Thanks!

There is now a new quit smoking drug available in the market. This latest breakthrough is known as Chantix. It is able to help smokers snub out their addiction by working on the brain.