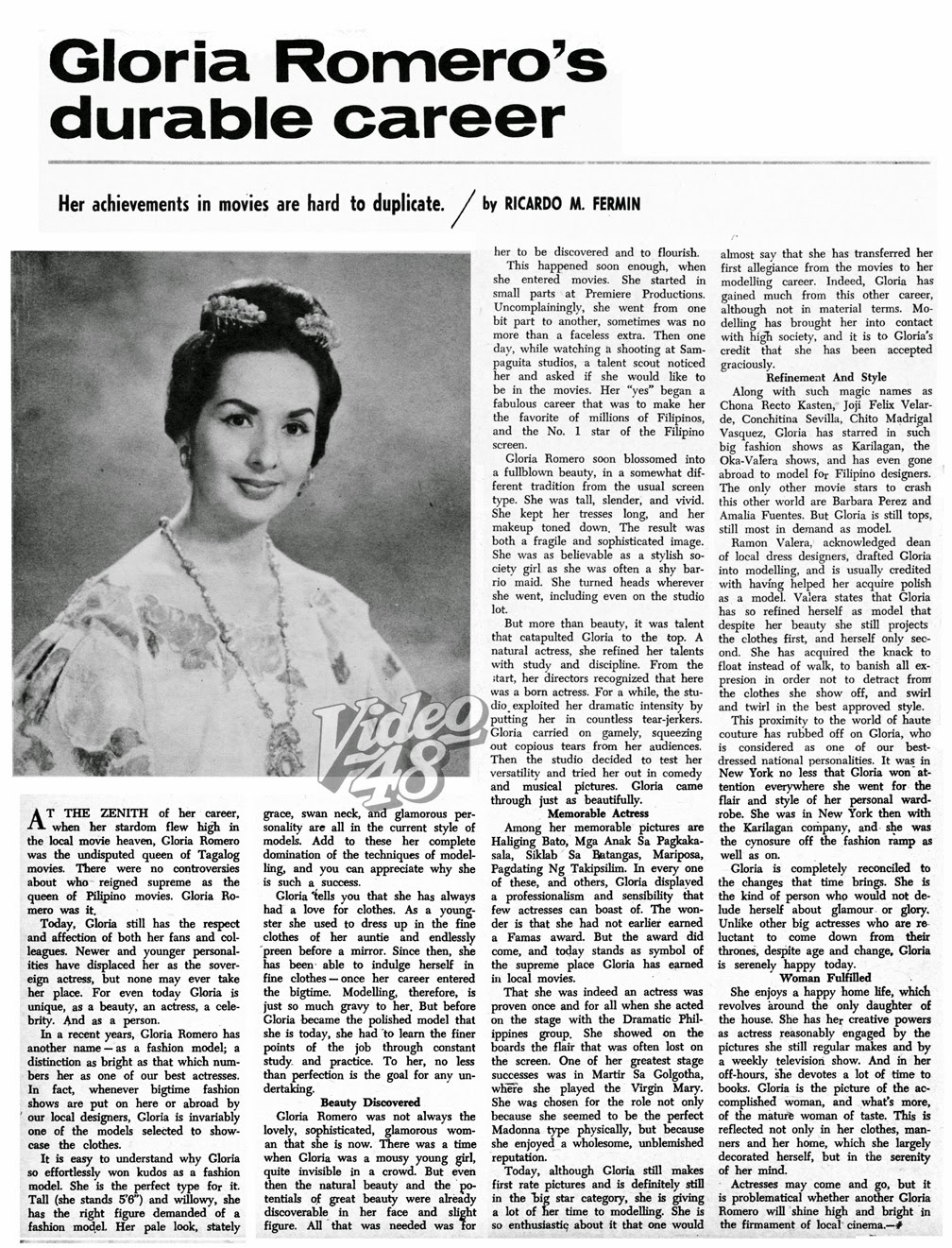 At the zenith of her career, when her stardom flew high in the local movie heaven, Gloria Romero was the undisputed queen of Tagalog movies. There were no controversies about who reigned supreme as the queen of Pilipino movies. Gloria Romero was it.

Today, Gloria still has the respect and affection of both her fans and colleagues. Newer and younger personalities have displaced her as the sovereign actress, but none may ever take her place. For even today Gloria is unique, as a beauty, an actress, a celebrity, And as a person.


In recent years, Gloria Romero has another name- as a fashion model; a distinction as bright as that which numbers her as one of our best actresses. In fact, whenever big time fashion shows are put on here or abroad by our local designers, Gloria is invariably one of the models selected to showcase the clothes.
It is easy to understand why Gloria so effortlessly won kudos as a fashion model. She is the perfect type for it. Tall (she stands 5’6”) and willowy, she has the right figure demanded of a fashion model. Her pale look, stately grace, swan neck, and glamorous personality are all in the current style of models. Add to these her complete domination of the techniques of modelling, and you can appreciate why she is such a success.
Gloria tells you that she has always had a love for clothes. As a youngster she used to dress up in the fine clothes of her auntie and endlessly preen before a mirror. Since then, she has been able to indulge herself in fine clothes- once her career entered the bigtime. Modelling, therefore, is just so much gravy to her. But before Gloria became the polished model that she is today, she had “to learn the finer points of the job through constant study and practice. To her, no less than perfection is the goal for any undertaking.

Gloria Romero was not always the lovely, sophisticated, glamorous woman that she is now. There was a time when Gloria was a mousy young girl, quite invisible in a crowd. But even then the natural beauty and the potentials of great beauty were already discoverable in her face and slight figure. All that was needed was for her to be discovered and to flourish.
This happened soon enough, when she entered movies. She started in small parts at Premiere Productions. Uncomplainingly, she went from one bit part to another, sometimes was no more than a faceless extra. Then one day, while watching a shooting at Sampaguita studios, a talent scout noticed her and asked if she would like to be in the movies. Her “yes” began a fabulous career that was to make her the favorite of millions of Filipinos, and the No. 1 star of the Filipino screen.

Gloria Romero soon blossomed into a full blown beauty, in a somewhat different tradition from the usual screen type. She was tall, slender, and vivid. She kept her tresses long, and her makeup toned down, The result was both a fragile and sophisticated image. She was as believable as a stylish society girl as she was often a shy barrio maid. ‘She turned heads wherever she went, including even on the studio lot.
But more than beauty, it was talent that catapulted Gloria to the top. A natural actress, she refined her talents with study and discipline. From the tart, her directors recognized that herewas a born actress. For a while, the studio exploited her dramatic intensity by putting her in countless tear-jerkers. Gloria carried on gamely, squeezing out copious tears from her audiences. Then the studio decided to test her versatility and tried her out in comedy and musical pictures. Gloria came through just as beautifully. 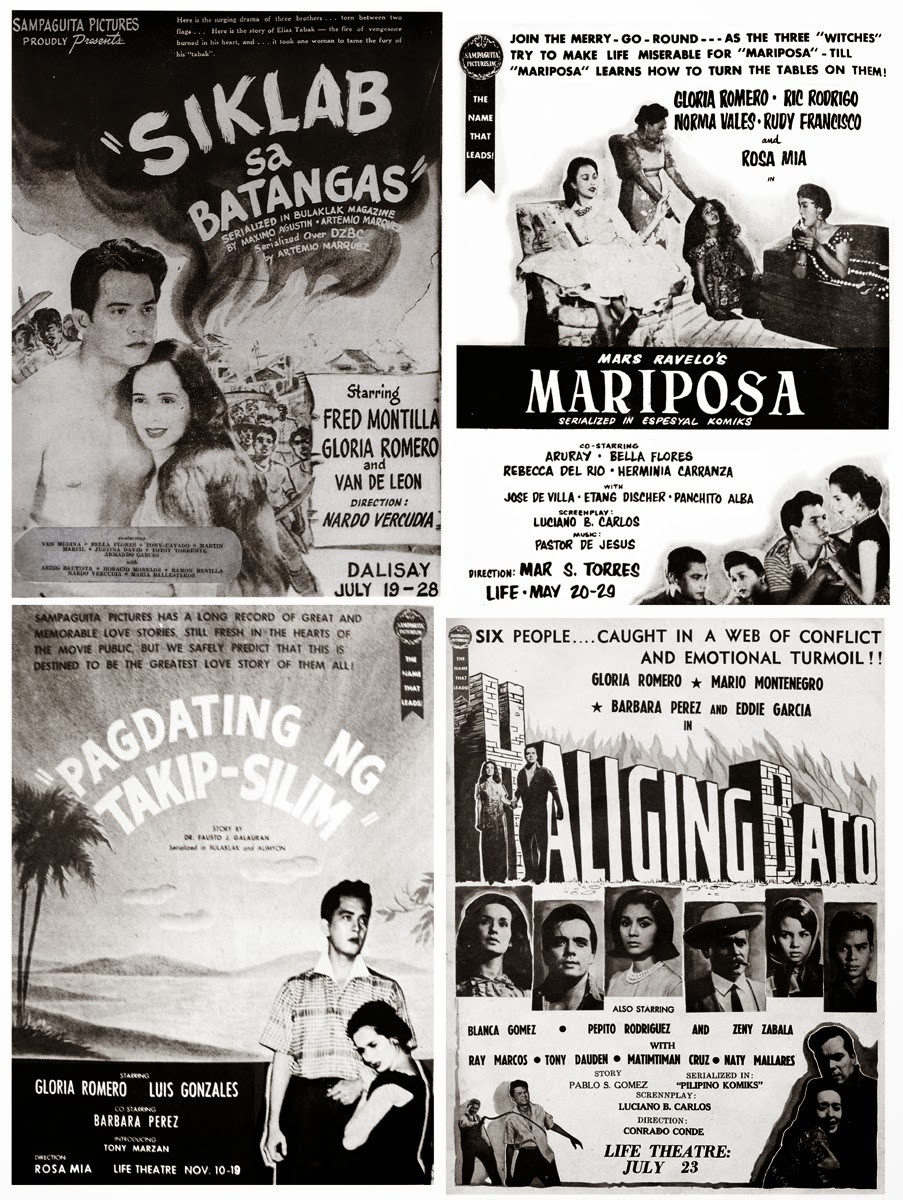 Among her memorable pictures are Haliging Bato, Mga Anak Sa Pagkakasala, Siklab Sa Batangas, Mariposa, Pagdating Ng Takipsilim. In every one of these, and others, Gloria displayed a professionalism and sensibility that few actresses can boast of. The wonder is that she had not earlier earned a Famas award. But the award did come, and today stands as symbol of the supreme place Gloria has earned in local movies. 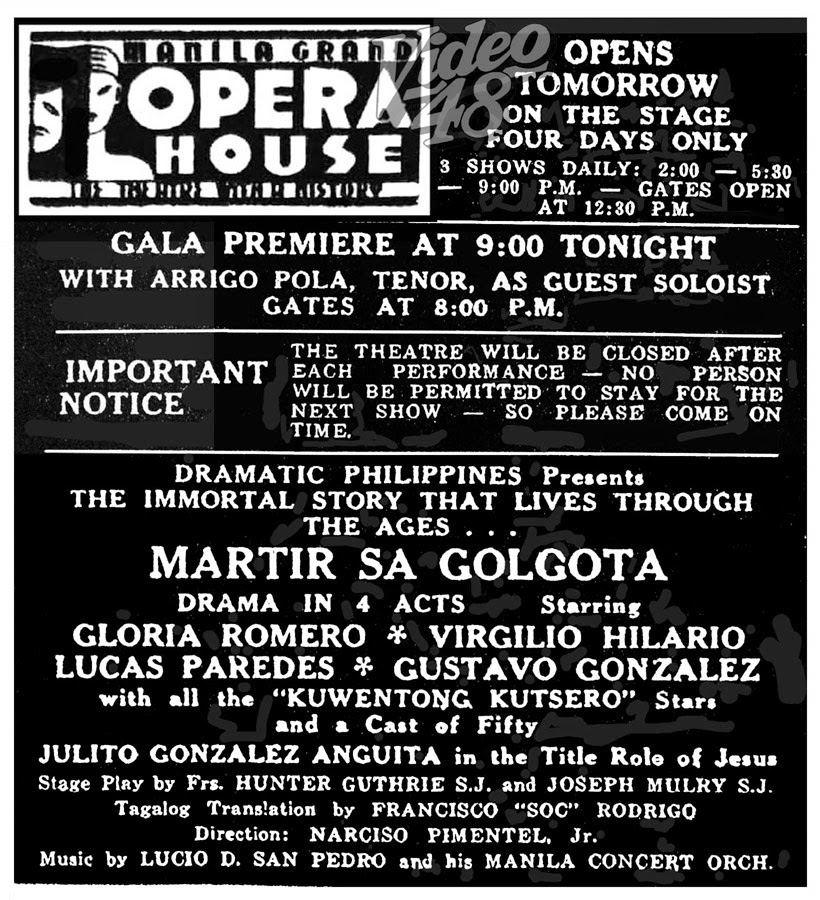 That she was indeed an actress was proven once and for all when she acted on the stage with the Dramatic Philippines group, She showed on the boards the flair that was often lost on the screen. One of her greatest stage successes was in Martir Sa Golgotha, where she played the Virgin Mary. She was chosen for the role not only because she seemed to be the perfect Madonna type physically, but because she enjoyed a wholesome, unblemished reputation.

Today, although Gloria still makes first rate pictures and is definitely still in the big star category, she is giving a lot of her time to modelling. She is so enthusiastic about it that one would almost say that she has transferred her first allegiance from the movies to her modelling career. Indeed, Gloria has gained much from this other career, although not in material terms. Modelling has brought her into contact with high society, and it is to Gloria’s  credit that she has been accepted
graciously.

Along with such magic names as Chona Recto Kasten, Joji Felix Velarde, Conchitina Sevilla, Chito Madrigal Vasquez, Gloria has starred in such big fashion shows as Karilagan, the Oka-Valera shows, and has even gone abroad to model for Filipino designers. The only other movie stars to crash this other world are Barbara Perez and Amalia Fuentes. But Gloria is still tops, still most in demand as model.

Ramon Valera, acknowledged dean of local dress designers, drafted Gloria into modelling, and is usually credited with having helped her acquire polish as a model. Valera states that Gloria has so refined herself as model that despite her beauty she still projects the clothes first and herself only second. She has acquired the knack to float instead of walk, to banish all expresion in order not to detract from the clothes she show off, and swirl and twirl in the best approved style.

This proximity to the world of haute couture has rubbed off on Gloria, who is considered as one of our best-dressed national personalities. It was in New York no less that Gloria won attention everywhere she went for the flair and style of her personal wardrobe. She was in New York then with the Karilagan company, and she was the cynosure off the fashion ramp as well as on.

Gloria is completely reconciled to the changes that time brings. She is the kind of person who would not delude herself about glamour or glory. Unlike other big actresses who are reluctant to come down from their thrones, despite age and change, Gloria is serenely happy today.

She enjoys a happy home life, which revolves around the only daughter of the house. She has her creative powers as actress reasonably engaged by the pictures she still regular makes and by a weekly television show. And in her off-hours, she devotes a lot of time to books. Gloria is the picture of the accomplished woman, and what’s more, of the mature woman of taste. This is reflected not only in her clothes, manners and her home, which she largely decorated herself, but in the serenity of her mind.
Actresses may come and go, but it is problematical whether another Gloria Romero will shine high and bright the firmament of local cinema.