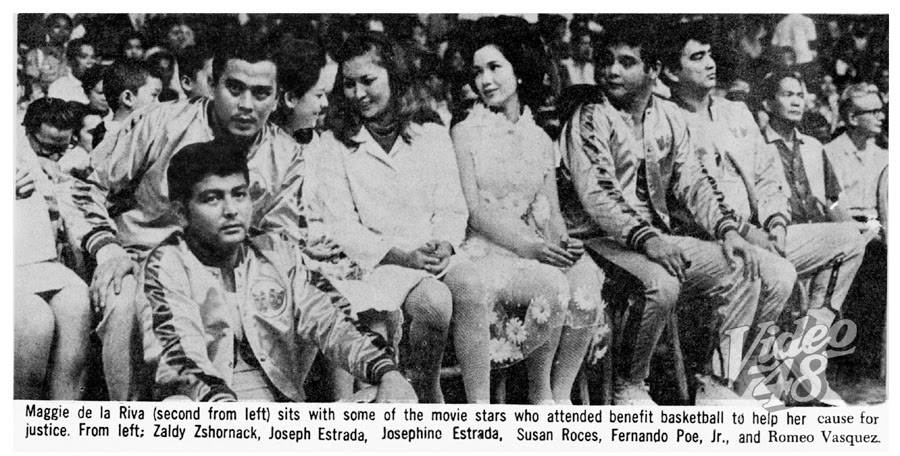 It’s no hyperbole to say the basketball game participated in by almost all of the top actors in town for Maggie de la Riva's cause, was a smashing success. Fans, some coming from faraway provinces, milled around the Loyola Center compound as early as one pm.
At around 3:30, when the game was about to start, tickets were all sold out handing scalpers a holiday. Tickets worth P10 cost twice as much. Yet the fans did not complain!

SIDELIGHTS: The program began at exactly four pm. To start the ball rolling, so to speak, a musical extravaganza, featuring well-known entertainment personalities, was presented. The Hi-Jacks belted out more than three songs. Pablo Virtuoso wowed the audience with his versatility as a guitar player, Ric Arellano, aside from rendering a number, cracked some jokes, to everyone’s delight. But the entertainer who truly brought the house down was Eddie Mesa. Every song Eddie sang drew spirited shrieks from the audience. And the fans simply refused to let him go, not even after Eddie’s eight songs.

A flourish of trumpets heralded the entrance of both the Philippine Movies Star selection and the US Embassy quintet and the US Mariners. A pretty young Miss, whose name escapes as, unfortunately, served as the Americans’ muse. They also had four' pretty girls, clad in navy uniforms, cheering for them. Suffice it to say, their presence lent much color to the affair.
The local boys’ muse for the first team, was Josephine Estrada while Susan Roces was the second team’s. Maggie de la Riva, of course, was the cynosure of all eyes when she was presented to the audience. Joseph Estrada and Fernando Poe, Jr. escorted her to the microphone, where she delivered a much-applauded speech. Maggie has lost some pounds but she still looked pretty in her all-white ensemble. Conspicuous around her for the entire affair were her PC escorts.

As usual, before the program started, the Philippine National Anthem was played. And of course, the American Star Spangled Banner. Vic Pacia, incidentally, served as the emcee during the entire event.

It was also easy to predict who among the movie players would score the most. After all, everyone knows who among the participants used to be basketball stars before they entered the movie field. As expected, therefore, Romy Diaz (formerly of the FEU Tamaraws and the Crispa Redmanizers), Willie Sotelo (San Beda Red Lions), Robert Arevalo (Ateneo Blue Eagles), Ramil Rodriguez (Letran), Zaldy Zshornack (MCU), Paquito Diaz (FEU), and Andy Poe and Bob Soler (both of Jose Rizal College) made the most score, leading their teams to victory.

Immediately after the affair, a victory party was held at the D & E Restaurant in Quezon City. It was actually a double-purpose affair. For even if the local boys did not win, the party would have been pushed through just the same--- the cagefest happened to fall on the day before Fernando Poe, Jr.'s birthday. And Joseph Estrada, Ronnie’s bosom friend, believed a party immediately after the game would be the best way to greet Ronnie on his natal day. A king-size cake, the presence of so many friends, and what’s more, a buss from his lady love - what more could Ronnie ask for? In case you are interested, there were 27 candles in all on his birthday cake, which, incidentally, was given by Susan Roces.