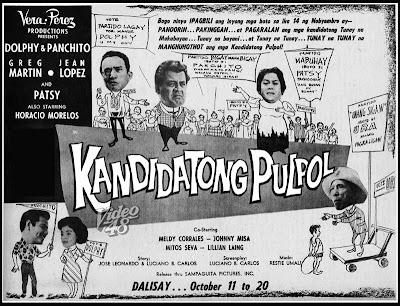 The 1961 classic comedy, Kandidatong Pulpol, a parody or lampoon on our election we Pinoys can identify with and laugh about. It tells of four ridiculous and outrageous candidates, Dolphy of Partido Lagay, Panchito of Partido Bigay Nang Bigay, Patsy of Partido Mabuhay and Horacio Morelos of Partido Unang Sigaw, fighting it out for the town mayor. These candidates tried to put one on the other, discrediting their opponents, making malicious remarks, the way our politicians today are doing. Comedy legends Dolphy, Panchito and Patsy in their comic best! Enjoy the short clip---