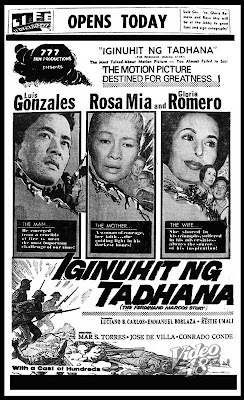 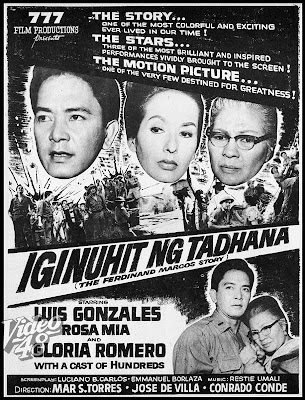 Iginuhit ng Tadhana, a political propaganda movie, tells of the life and exploits of then Philippine Presidential candidate, Senator Ferdinand E. Marcos (played by Luis Gonzales). One of the highlights of the two-and-half movie was the celebrated Nalundasan case, where the young Marcos was accused of murder. Was he guilty of the crime or not?On the evening of September 20, 1935, newly elected Ilocos Sur Rep. Julio Nalundasan was murdered in his home, after dinner, while brushing his teeth. The alleged assassin was the 18-year-old Ferdinand Marcos, then a University of the student, whose father Mariano had just lost to Nalundasan in the election for the Commonwealth-era National Assembly. Mariano's devastating defeat was made even more humiliating by Nalundasan's decision to hold a victory parade that featured a coffin bearing his rival's name. (see clip below)

Ferdinand Marcos, along with his father and two uncles were arrested and charged with the murder of Nalundasan in 1938.In April 1939, Marcos received Bachelors of Laws and studied for the bar examinations while in prison. He posted bail in August the same year to attend the bar exams. In September 1939, Marcos, his father and two uncles stood trial before Laoag Provincial Court of First Instance. In November 1939, Ferdinand Marcos was summoned by the university dean on suspicion of cheating in the bar exams. Marcos managed to justify his extremely high marks but was not allowed to take oath as his own trial was still pending. Some months later Marcos was found guilty by the and sentenced to imprisonment.

Marcos appealed to the Supreme Court and defended himself (see clip below). The Supreme Court under Justice Jose P. Laurel granted Marcos acquittal after finding the prosecution's case contradictory. In effect, Marcos has won his first case before he had even started to practice law. The Philippine Free Press called him lawyer of the year in the November 12, 1940 issue. Marcos became a trial lawyer in

... please check the title, it is grammatically incorrect. it should be 'DID MARCOS KILL NALUNDASAN' or 'WAS NALUNDASAN KILLED BY MARCOS'...

The Nalundasan case was indeed a huge issue during Marcos' candidacy against Macapagal. Many people believed that Marcos was guilty, but since in the eye of the law he was found innocent, then he was innocent.

Incidentally, Imelda complained about the too much crying of Gloria Romero in the film, claiming that she isn't that IYAKIN in real life, so I heard Mar S Torres had to re-take some scenes.
:)

Luis Gonzales seem to have a very good handle on playing Marcos, his acting in that court scene where he defended himself was excellent, I think. I actually kept seeing Marcos. Well, of course he's more good looking than Marcos, and the accent was different, but it's a glamorized movie version. The dialogue in the court scene was excellent, seems to me (if this was propanganda) a direct translation from English (the real court event was most probably in English) of Marcos' closing speech. The judge however was overly friendly, not in keeping with his stature, and then congratulating and exchanging handshakes with Marcos too. Usually a Judge will give his verdict, dismiss the case, and then go back to chambers. And who were those other people beside the judge who Marcos shook hands with? Well, of course I don't know much about the Judicial system in Manila, so just wondering.

BTW Simon, I saw the grammar error immediately, but I was sure it was a typo and that you'd correct it right away.

Rod, regarding the trivia question--- Luis and Gloria did a sequel in 1969 titled "Pinagbuklod ng Langit."

If what we are reading in our history books are correct, then Marcos really killed Nalundasan. Some of the evidence pointed to Marcos like the missing rifle in the UP ROTC armory at the time of assasination.

The RP court had found Marcos not guilty, and therefore, in the eyes of the law, he is innocent.

But, being innocent in the eyes of God (that is: if one believes in the existence of God), is another story. And that – is between Marcos and his God alone.

And By the way, Simon. I think, it was PINAGBUKLOD NG LANGIT, a film directed by Armando de Guzman (in Eastman color), was the movie where Imelda complained of Gloria Romero's "too much crying."

Simon, JM,
I don't suppose Imelda "cried" for the Filipino people when she was spending all their money. She was probably describing herself most accurately when she says she's not IYAKIN. The Steel Butterfly had a heart of steel. Imagine burying a worker in that CCP construction.

Simon, I thought they made more than the two movies. There was another Marcos movie with Ruben Rustia in the title role of Marcos. What was the title?
Rod

That other movie with Gary Busey, which is an out and out STINKER, by the way, is called A DANGEROUS LIFE, an Aussie production. Everything about that film was horrendous.

Indeed, Imelda was not iyakin when she was enjoying the luxuries of the Philippine coffers brought her jetsetting days. Though what many people have said about her, especially when they labelled her a bitch, is actually quite inaccurate. She is, in fact, a very cheerful person: always smiling and nice to her staff, and even to the janitors. This other side of Imelda was almost not written about. She is after all, not a mere black and white entity, but just like most people with both good and bad side.

And yes, that Film center incident was truly a huge black eye in her persona. The film community and the world at large would have been kinder to her if she didn't order that infamous "Cask of Amontillado" way of burial for those poor construction workers.

Would anyone know where i can find this scene with english subtitles or the script in fil or english?

I read the SC decision penned by JP Laurel, who btw served during the Japanese Imperial Army occupation. He turned a blind eye to all the rape and torture committed by the Japanese against our women. He was a traitor in any book.

His decision was expertly written and systematically discredited the lone witness and the arguments presented by the prosecution. The Justices who concurred share responsibility in this historic miscarriage of justice.

Only the Marcoses had clear motive and the means yet these too were almost completely ignored.