In 1964, popular comedian Toto, known for his hilarious antics in stage shows, became the target of a manhunt by a group of notorious gangsters. The group went to the Manila Grand Opera House looking for him and when they failed to find him, one the gunmen sprayed the theater lobby with bullets. This mafia-like incident became a headline news the following day. Here's that full blown account, from the front pages of The Manila Times--- 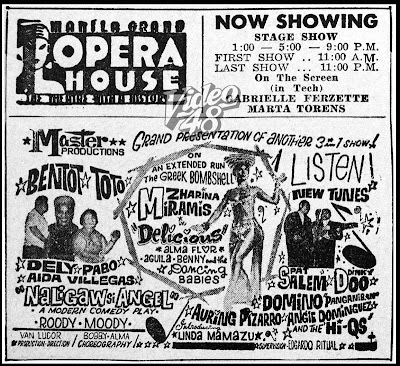 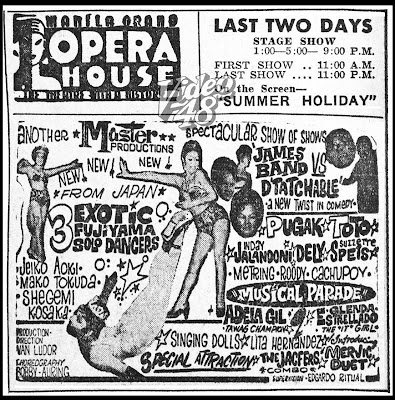 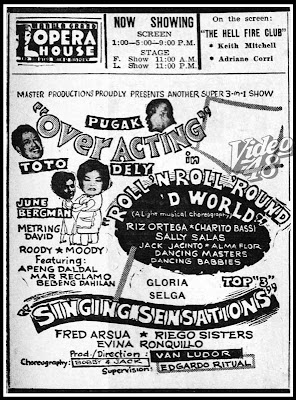 Various stage shows at the Opera House Circa 1962-64, where Toto was one of the mainstays 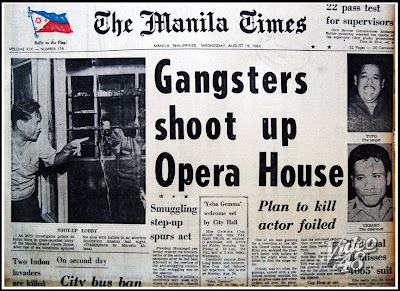 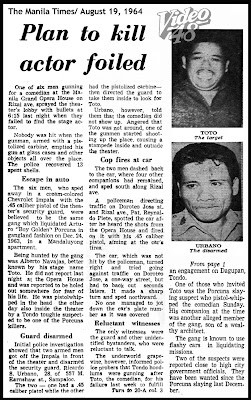 August 19, 1964--- One of the six men gunning for a comedian at the Manila Grand Opera House on Rizal Avenue sprayed the theater’s lobby with bullets at 6:15 last night when they failed to find the stage actor. Nobody was hit when the gunman, armed with a pistolized carbine, emptied his gun at glass cases and other objects all over the place. The police recovered 13 spent shells.

The six men, who sped away in a cream-colored Chevrolet Impala with the .45 caliber pistol of the theater’s security guard, were believed to be the same gang which liquidated Arturo “Boy Golden” Porcuna in gangland fashion on Dec. 24., 1963, in a Mandaluyong apartment. Being hunted by the gang was Albverto Navajas, better known by his stage name “Toto.” He did not report last night at the Opera House and was reported to be holed out somewhere for fear of his life. He was pistol-whipped in the head the other day also inside the theater by a Tondo toughie suspected to be one of the Porcuna killers.

Initial police investigation showed that two armed men got off the Impala in front of the theater and disarmed the security guard, Ricardo S. Urbano, 28, of 557 M. Earnshaw st., Sampaloc. The two--- one had a .45 caliber pistol while the other had the pistolized carbine--- then directed the guard to take them inside to look for Toto. Urbano, however, told them that the comedian did not show up. Angered that Toto was not around, one of the gunmen started shooting up the place, causing a stampede inside and outside the theater.

The two men dashed back to the car, where four other companions had remained, and sped south along Rizal ave. A policeman, Patrolman Reynaldo Plete, directing traffic on Doroteo Jose Street and Rizal Avenue, spotted the car after he heard the shots from the Opera House and fired on it with his .45 caliber pistol, aiming at the car’s tires. The car, which was not hit by the policeman, turned right and tried going against traffic on Doroteo Jose, a one-way street, but had to back out seconds later. It made a sharp turn and sped northward. No one managed to jot down the car’s plate number as it was covered. The only witnesses were the guard and other unidentified bystanders, who were reluctant to talk.

The underworld grapevine, however, informed police probers that Tondo hoodlums were gunning after Toto, the comedian, for his failure last week to fulfill an engagement on Dagupan, Tondo. One of those who invited Toto was the Porcuna slaying suspect who pistol-whipped the comedian Sunday. His companion at the time was another alleged member of the gang, son of a wealthy architect. The gang is known to use flashy cars in liquidating missions. Two of the suspects were reported close to high city government officials. They have been wanted since the Porcuna slaying last December.
(Source: The Manila Times/ August 19, 1964) 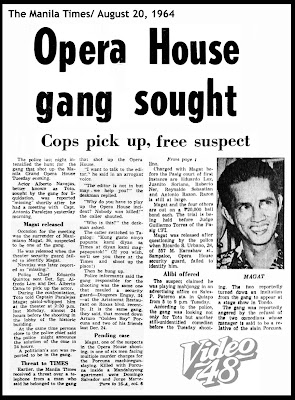 click image to enlarge
August 20, 1964--- The police last night intensified the hunt for the gang that shot up the Manila Grand Opera House Tuesday evening. Actor Alberto Navajas, better known as "Toto," sought by the gang for liquidation was reported “missing”shortly after he had a meeting with Capt. Antonio Paralejas yesterday morning. Occasion for the meeting was the surrender of Maximiano Magat, 36, suspected to be one of the gang. He was released when the theater security guard failed to identify Magat. Navajas was later reported as “missing.” Police Chief Eduardo Quintos sent Det. Sgt. Alfredo Lim and Det. Alberto Cano to pick up the actor. During the confrontation, Toto told Captain Parelejas, Magat pistol-whipped him at the theater at 2:30 p.m. last Monday, almost 24 hours before the shooting in the lobby of the historic building. At the same time, persons close to the police chief said the police might announce the solution of the case in 24 hours. A politician’s son was reported to be in the gang.
Earlier, the Manila Times received a threat over a telephone from a man who said he belonged to the gang that shot up the Opera House. “I want to talk to the editor,” he said in an arrogant voice. “The editor is not in but may we help you?” the deskman replied. “Why do you have to play up the Opera House incident? Nobody was killed!” the caller shouted. “Who is this?” the deskman asked. The caller switched to Tagalog: “Kung gusto ninyo pupunta kami diyan sa Times at diyan kami magpapaputok!” (If you wish, we’ll see you there at the Times and shoot up the place!). Then he hung up.

Police informants said the gang responsible for the shooting was the same one that mauled a security guard--- Diogenes Engay, 34--- at the Aristocrat Restaurant on Roxas blvd. recently. It is the same gang, they said that mowed down Arturo “Golden Boy” Porcuna and two of his friends last Dec. 24.

Magat, one of the suspects in the Opera House shooting, is one of the six men facing multiple murder charges for the Porcuna machinegun-slaying. Killed with Porcuna inside a Mandaluyong apartment were Domingo Salvador and Jorge Martelino. Charged with Magat before the Pasig Court of First Instance are Eduardo Luz, Juanito Soriano, Roberto Ner, Reynaldo Sebastian and Antonio Razon. Razon is still at large. Magat and the four others are out on a P20,000 bail bond each. The trial is being held before Judge Guilermo Torres of the Pasig CFI. Magat was released after questioning by the police when Ricardo S. Urbano, 28, of 557 M. Earnshaw st., Sampaloc, Opera House security guard, failed to identify him. The suspect claimed he was playing mahjongg in an advertising office on Sales- P.Paterno sts. in Quiapo from 5 to 9 p.m. Tuesday.

According to the police, the gang was looking not only for Toto but another still unidentified comedian before the Tuesday shooting. The two reportedly turned down an invitation from the gang to appear at a stage show in Tondo. The gang was reportedly angered by the refusal of the two comedians whose manager is said to be a relative of the slain Porcuna.
(Source: The Manila Times/ August 20, 1964)

Further investigations revealed that the primary motive of the shooting was Toto's non-payment of the diamond ring worth P2,000 he supposedly got on installment. According to an article, “Neither Grand Nor Opera” by Quijano de Manila (Nick Joaquin)--- "Magat dismisses as gossip the rumor that he and Toto fell out because the comedian refused to perform at a fiesta in Tondo and a recent benefit show in Chinatown. Magat insists that the trouble was not between him and Toto but between Toto and a woman named Lucy, who happens to be a comadre of Magat’s and who approached him for help to collect payment from Toto for a diamond ring. However, Toto and Magat have different versions of the mystery of the diamond ring." And that’s where the misunderstanding started.

I spoke to Tony Razon lately and he said Eddie Luz is gone, last time he saw Baby Soriano was in 1980, and he doesn't know the whereabouts of Rene Sebastian, Razon is very much alive with his family in US.

Where are Bobby Ner and Rene Sebastian .