This bizarre and horrific incident, a front page headline news in 1961 became the subject of a 1981 Mike de Leon critically-acclaimed movie, Kisapmata. It happened on the late afternoon of January 18, 1961 when a Manila Police detective killed his daughter, son-in-law, critically wounding his wife and shot himself to death due to domestic and family dispute. Here's the full account of that fateful and unfortunate tragedy --- from the front page of The Manila Chronicle. 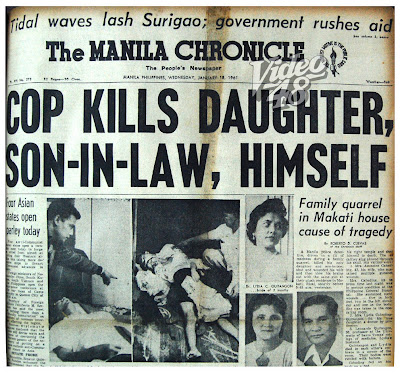 A Manila police detective, driven to a fit of madness during a family quarrel, killed his only daughter and son-in-law, shot and wounded his wife and then blew his brains out with the same gun at their plush residence in Makati, Rizal, shortly before 5:45 p.m. yesterday. 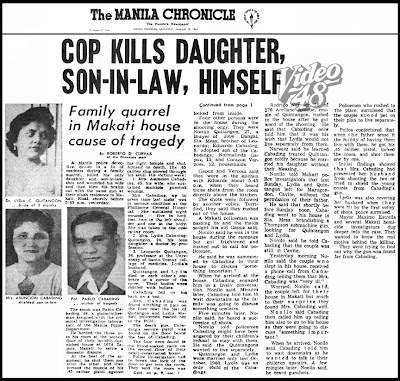 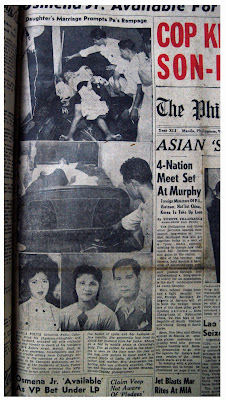 The amok was Pablo Cabading, 48, a plainclothesman assigned with the criminal investigation laboratory of the Manila Police Department. He herded the three into his room at the second floor of their lavishly-furnished house at 1074 Zapote, Makati to settle a domestic dispute. At the heat of the argument, he shot them one after, and then presses the muzzle of his .45 caliber pistol against his right temple and shot himself to death. The .45 caliber slug plowed through his skull. His victims were: 1. Mrs. Asuncion Cabading, 45, his wife, who sustained multiple gunshot wounds. Mrs. Cabading, up to press time last night, was in serious condition at the Philippine General Hospital. She sustained eight wounds --- five in both feet, two in the left shoulder and one in the body. She was taken to the operating room. 2. Mrs. Lydia Cabading-Quitangon, 24, his lone daughter, a doctor by profession. 3. Leonardo Quitangon, 36, professor at the University of Santo Tomas College of Medicine, Lydia’s husband.

Quintangon and Lydia died in each other’s embrace in a corner of the room. Their bodies were riddled with bullets. Cabading fell on his back on a bed. Mrs. Cabading was found writhing in pain on the floor near the feet of Quitangon and Lydia. Makati policemen rushed her to the PGH. The death gun, Cabading’s service pistol was found on the floor below the feet of Cabading. The four were found in the blood-soaked room on the second floor of their newly-constructed house. Police investigators had to break the lock of the door to get into the room. They said the room was locked from inside.

Four other persons were in the house during the shooting orgy. They were Nonilo Quitangon, 27, a lawyer of 3996 Dangal, Sta. Mesa, brother of Leonardo; Eduardo Cabading, 8, adopted son of the Cabadings; Normalinda Gapuz, 15, and Corazon Verzosa, 12, housemaids. A Makati policeman was passing by and the maids sought his aid, Gapuz said. Nonilo said he was in the house during the rampage but got frightened and rushed out tocall for policemen. He said he was summoned by Cabading to their house to discuss “something important.” When he arrived at the house, Cabading engaged him in a lively conversation, Nonilo said. Minutes later, Cabading told him to wait downstairs as the family was going to discuss something upstairs. Five minutes later, Nonilo said, he heard a succession of shots. Nonilo told policemen Cabading might have been angered by their children’s refusal to stay with them. He said the Quintangons wanted to live separately. Quintangon and Lydia were married only last October 1960. Lydia was an only child of the Cabadings. 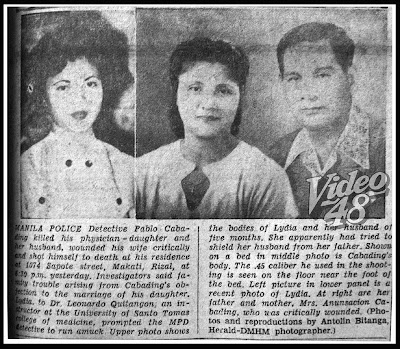 Rodrigo Narvaez, 18, of 176 Arellano Avenue, cousin of Quintangon, rushed to the house after he got word of the shooting. He said that Cabading once told him that it was his wish that Lydia would not live separately with them. Narvaez said he learned Cabading treated Quintangon coldly because he married his daughter without their blessing. Nonilo told Makati police investigators that last Sunday, Lydia and Quintangon left for Marogondon, Cavite, without the permission of their father. He said that shortly before Sunday noon, Cabading went to his house in Sta. Mesa brandishing a Thompson submachine gun, looking for Quintangon and Lydia. Nonilo said he told Cabading that the couple was still in Cavite. Yesterday morning, Nonilo said, the couple who slept in his house received a phone call from Cabading telling them that Mrs. Cabading was “very ill.” Worried, Nonilo said, the couple left for their house in Makati but much to their surprise they found Mrs. Cabading well. Nonilo said Cabading then called him up telling him also to go to his house as they were going to discuss “something important.” When he arrived, Nonilo said, Cabading told him to wait downstairs as he wanted to talk to their children upstairs. A few minutes later, Nonilo said, he heard gunshots.

Policemen who rushed to the place, surmised that the couple stood pat on thei plan tp live separately. Police conjectured that when the father sense it the futility of having them live with them, he got his .45 caliber pistol, locked the room, and shot them one by one. Initial findings showed that Mrs. Cabading had prevented her husband from shooting the two or tried to shield the young couple from Cabading’s gun. Lydia was also covering her husband when they were hit by the first volley of shots, police surmised.

Mayor Maximo Estrella and several Makati homicide investigators dug deeper into the case. They wanted to know the real motive behind the killing. They were trying to find out why the gun was found far from Cabading. (by Roberto Cuevas) 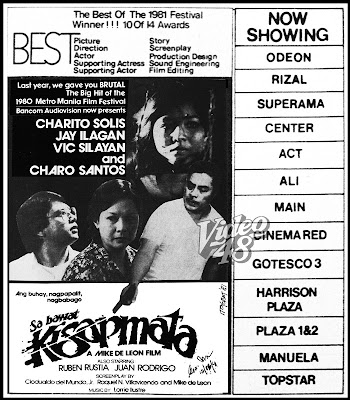 
This particular news item can also be read in full and in details in the article, "The House on Zapote Street" by Quijano de Manila (or Nick Joaquin) originally published in the Philippines Free Press magazine. It was later compiled with 12 other articles in a book, "Reportage on Crime." 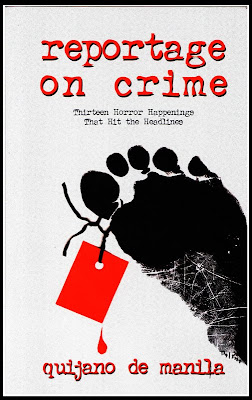 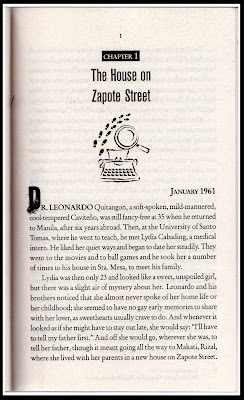 Simon,did Mrs. Cabading survive? What happened to their adopted son?

Dexter, Mrs. Cabading did survive. She made a statement at the hospital days after.

Simon,was her statement published in the papers? Please post it if you have the article. So,what was the reason for the killings? Wonder if Mrd. Cabading is still around today,as well as the adopted son and the lawyer brother of the son in law.

Dexter, I don't have Mrs. Cabading's statement that was published in the papers. However, I want to share excerpt from Nick Joaquin's article "The House on Zapote Street" and it read as follows:

The entire room was spattered with blood. On the floor, blocking the door lay Mrs. Cabading. She had been shot in the chest and stomach but was still alive. The policeman tried to get a statement from her but all she could say was: “My hand, my hand---it hurts!” She was lying across the legs of her daughter, who lay on top of her husband’s body. Lydia was still clutching an armful of clothes; Leonardo was holding a clothes hanger. She had been shot in the breast; he, in the heart. They had died instantly, together.

Sprawled face up on his daughter’s bed, his mouth agape and his eyes bulging open as though still staring in horror and the bright blood splashed on his face, lay Pablo Cabading.


“Oh, I cursed him!” cried Eugenio Quitangon (Leonardo’s father) with passion. “Oh, I cursed that dead man there on that bed, for I had wanted to find him alive!”

From the position of the bodies and from Mrs. Cabading’s statements later at the hospital, it appears that Cabading shot Lydia while she was shielding her husband and Mrs. Cabading when she tried to shield Lydia. Then he turned the gun on himself, and it’s an indication of the man’s uncommon strength and power that, after the first shot, through the right side of the head, which must have been mortal enough, he seems to have been able, as his hand dropped to his breast, to fire at himself a second time. The violent spasm of agony must have sent the gun---a .45 caliber pistol--- flying from his hand. It was found at the foot of the bed, near Mrs. Cabading’s feet.

Auggie, maybe--- I would surmise that the motive of the killing would be extreme jealousy on the part of the father. There might have been something strange going on in the household that the family wanted it to remain secret. Another thing, in the movie version, all perished including Mrs Carandang (Charito Solis), supposed to be Mrs. Cabading.

Thanks Simon. I hope the book is still available,will hunt for it when i go home in October.

Dexter, the book is available in selected National Bookstore outlets.

Simon,where is Video 48 located? Is it a video rental store or do you sell VCSs/DVDs? Do you have copies of hard to find pinoy movies? Been hunting for Claudia Zobel & Stella Strada movies.

Dexter, Video 48 is a video sale/rental shop located at 48 West Avenue, Quezon City. If you have some inquiries, email me at simon_santos48@yahoo.com. Thanks!

it is interesting to note that of the main characters ; it is only charo santos who is still alive...

i'd just like to ask where you got the photos of the manila chronicles' headline. i really need it for my paper. if you have time, please do reply through my email: ocaleara@yahoo.com thank you so much!

Hi, I just like to know whether their house(Cabading's), is still there or it has been demolished. I also noticed by using google street view, that the house number 1074 Zapote street in Makati is no longer used.

I just became curious about this story because my niece asked me if I already knew this. Thanks for the information in this blog. I never thought the case is a century old..