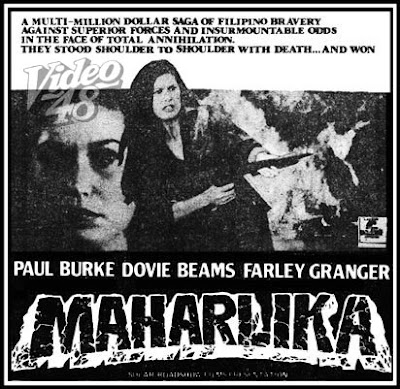 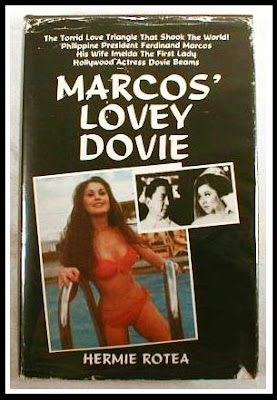 Maharlika (1971), produced by Paul Mason and directed by Gerry Hopper, depicted the legendary exploits of former President Ferdinand E. Marcos during World War II. The lead stars are Paul Burke (in the role of the young Marcos), Farley Granger and starlet Dovie Beams who played the role of Isabella, a Fil-American mestiza. The movie was said to be a part of CIA-funded propaganda to portray Marcos as a war hero who fought the Japanese during WW II. It became a sizzling issue and controversy ensued when the press made an expose and divulged the existence of a tape recordings incriminating the President and allegedly confirming the rumors that Ms. Beams was the President’s mistress.

Although the film was yanked out of exhibition, it enjoyed a brief run at several theaters after the EDSA revolution in 1986.

I used to work in I.M.'s PR office in the 70s. The president that time was seriously toying with the idea of replacing the nation with a new name: MAHARLIKA. Naku, eh, di sana, Republika ng Maharlika itong bansang ito ngayon.

But, persnickity as we were at the office, we decided to do our homework by researching the ancient meaning of this word. What we found was a true revelation, a rude awakening, in fact. Maharlika was the originally term referring to the male genitalia.

TheCoolCanadian, you did not make thorough your research. Since, you claim you are Canadian, you are really ignorant about our ancient history as a people. You are just showing your ignorance on the subject. If I were you, I would stop hawking on something you are not competent to speak about.