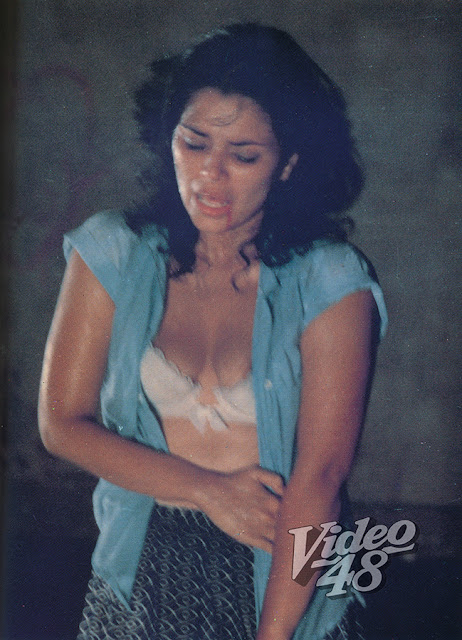 Synopsis: Angela del Mar (Hilda Koronel) has given up her schooling to earn money as a waitress in order to set up residence near a beach. Her mother, a bedridden laundrywoman who needs sea air to cure her tuberculosis, blames herself for her troubles and feels she could have become an office secretary were it not for her failing health. Angela works in a beerhouse where a gang of rapists-pimps hangs out. They are attracted to her as she is a pretty mestiza, albeit slum-bred. While she tries to discourage their advances, they are too strong for her.

One day, she is abducted on her way home. She is brought to a deserted warehouse where she is repeatedly raped for five days. Despite her pleas, she is brutally violated and sodomized. On the fifth day, the gang decides to tattoo their names on her back. Having no more need for her, the gang decides to sell her to a countryside brothel. However, there is a police raid when she is brought in and Angela is able to escape.

She is picked up by Rona (Celia Rodriguez), a kind-hearted prostitute who nurses her back to health. She goes back to her house and finds her mother has just died. Sally (Mona Pacheco), her friend in the beerhouse, took care of her but as she decided to go back to washing, she collapsed under the strain of work. A few weeks later, Sally becomes a victim of the gang. She obviously could not stand the humiliation and is found with her wrist slashed. Angela decides to seek revenge. . She goes back to Rona who takes her in as a househelp and friend. While she works in the club, Angela borrows her wig and her clothes and goes about hunting her rapists.

First to fall is Melchor (Dave Brodett). She pretends to be one of his girlfriends and is allowed into his apartment. She waits for him in his bed with only the din of a red light on her. She stabs him as he is about to embrace her. At the funeral parlor, Melchor’s brother, Celso (Raul Aragon), vows to find the killer. Melchor has supported him through his law studies which remain unfinished. Celso suspects a woman to be the killer.

The second to be attacked is Oscar (Ruel Vernal). He has just left the club when he vomits in a dark alley. He spots a pretty woman with dark glasses. He is stabbed as he tries to make a pass. He is saved by the headlights of a passing vehicle and is brought to a hospital. Angela looks over the hospital with the aim of finishing Oscar there. However, Celso pays Oscar a visit and spots Angela suspiciously lingering in the corridor. He realizes she is the assassin and runs after her but she has disappeared.

Bren (Tonio Gutierrez) is an easy target. He is stabbed while urinating in the dark. Angela chances upon Delio (Rez Cortez) in Rona’s house. It appears that Rona is his sugar mommy. She does not spare him despite his closeness to her benefactor. She waits for Rona to leave before striking. Delio’s body is found in the bedroom when Rona comes home.

The two other gang members are nervous. They suspect Rona’s helper. But she is not around when they come looking. Near the restaurant, Celso spots her at a distance. He runs after her and rips her dress. He sees the tattoos on her back and understands what she is doing. He tries to dissuade her from carrying out with her revenge. But Oscar and Bobby (Johnny Delgado) finally meet up with Angela. There is a chase in a saw mill. Bobby accidentally shoots Oscar. Angela stabs Bobby before shooting him. Angela gives herself up to Celso who has called the police.
(Source: Lino Brocka: The Artist and his Times) 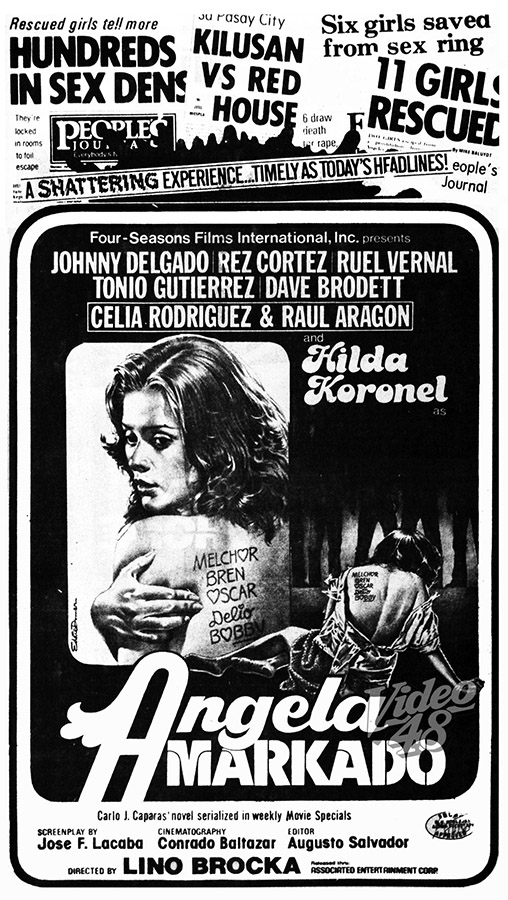 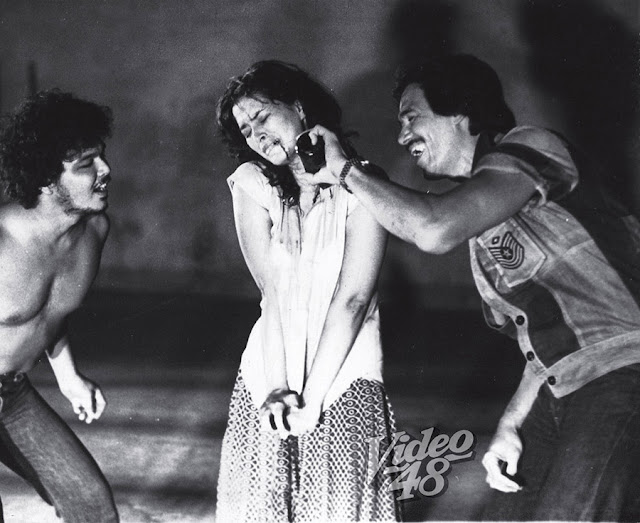 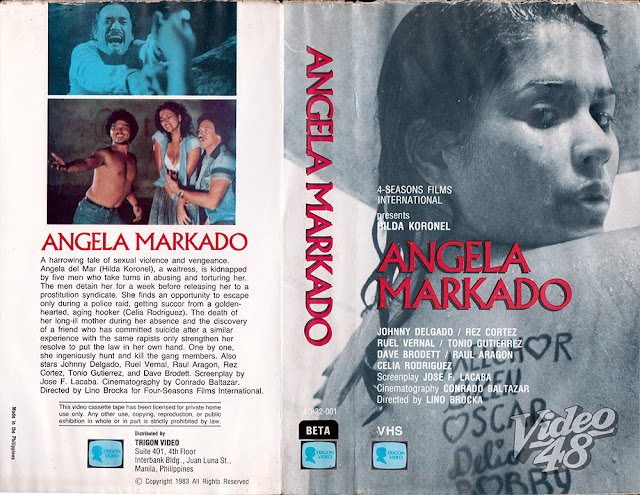