"Dear Kuya Cesar" was a popular radio program hosted by Cesar Lacbu Nucum, popularly known as Kuya Cesar. He was best remembered for his slow and monotonous way of delivering lines, a signature style, loved and endeared by the listening public. A movie was made in 1968 with Eddie Rodriguez in the lead role. 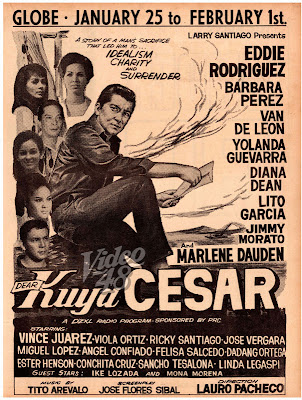 This one really took the cake, because the moviegoers were totally misled, thinking it was Kuya Cesar's biopic, and it wasn't. :)

Larry Santiago never intended this, and never claimed anything to the effect that it was a biopic (and apparently, Kuya Cesar was a huge radio personality then) but for some reason, moviegoers presumed it was Cesar Nocom's life story and went to the theaters to see it, anyway. He-he. And to their surprise later on, realizing what Kuya Cesar looked like in real life (first time his photo was published in Magazines), not even close to Mr. Eddie Rodriguez's looks. And how did I know this story? Well, I used to hang out at the Premiere Studios as a child because I always came along with my first cousin (whose "ninong" was Larry). And it was there also that I watched Manong Gerry de Leon and Mr. Armando Lopez edit Manong Gerry's films. Mr Lopez had a hard time editing Manong's films because Mr. de Leon had a habit of using up to the last frame available to be included in the movie. Sounds like the coffee commercial "Good to the last drop!" He-he. He was editing his film in his head, so to speak, something that drove Mr. Lopez crazy. :)

Many years later, Mr. Lopez and I have crossed our paths here in Vancouver, and while having dinner together, we talked non-stop about Manong Gerry, and how ingenious his films were. I recently watched ANAK NG BULKAN at Youtube and saw Mr. Lopez' name as Assistant film editor. It felt so nostalgic, I even missed the old man, knowing that he passed away a few years ago here in Vancouver.

But, I guess, we all have to close our eyes one day, and never to open them again.

With due respect to CoolCanadian, I remember very well that our father, Kuya Cesar, told us about this film way back then (1970s) and was excited to have us see it when it was shown on TV. In his entry CoolCanadian, failed to substantiate his claim that someone (not even clear who) misled the moviegoers to believe that this was our daddy's biopic aside from saying that Eddie Rodriguez did not look like our Dad (who by the way is also good-looking in his own way). Anyway, knowing how my dad stood by his principle, he (and his radio station then DZXL) would never allow his name to be dragged to mislead moviegoers in order that movie would become a top grosser.

Anyway, our thanks go to CoolCanadian for sharing his thoughts on this. "Hope to talk to you in whatever way to share ideas and experiences we have in common."

You must have misunderstood my message. It is very clear that I didn't say your Dad lied, nor Mr. Santiago – in whatever way. What I said very clearly was, THE MOVIEGOERS thought the film was a biopic. No one intended to mislead the the moviegoer, but since your dad's photos were never released in any magazine prior to this, the moviegoers assumed that it was Kuya Cesar's biopic that they were about to see. Regarding the looks of your father, I only state the fact that he never looked the same as Mr. Rodriguez, a very strong evidence that Mr. Santiago never made a film about a biopic of your father.

It's too bad I haven't seen your comment but now, so I am pleading for you to re-read my message because the way you thought was I said was not really what was said in the message. I don't intend to hurt anybody's feelings, and my intention was never to do this, and if you re-read my message, you'll realize that you misunderstood the posted message.