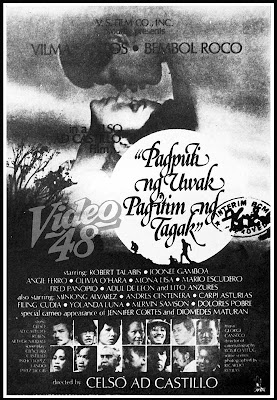 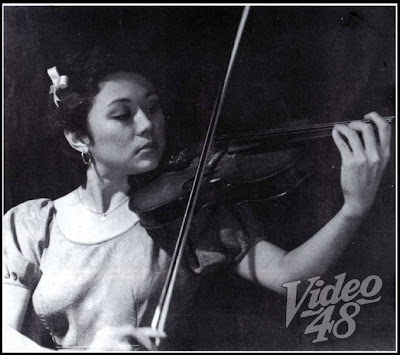 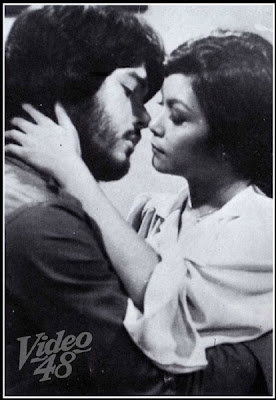 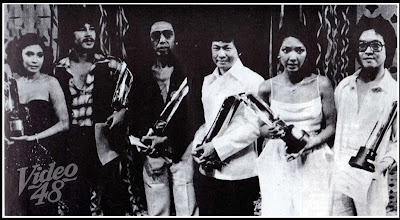 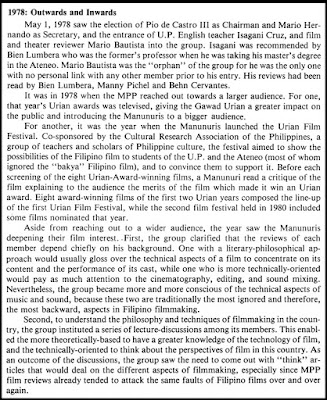 May 1, 1978 saw the election of Pio de Castro lll as Chairman and Mario Hernando as Secretary, and the entrance of U.P. English teacher Isagani Cruz, and film and theater reviewer Mario Bautista into the group. Isagani was recommended by Bien Lumbera who was the former’s professor when he was taking his master’s degree in the Ateneo. Mario Bautista was the “orphan” of "the group for he was the only one with no personal link with any other member prior to his entry. His reviews had been read by Bien Lumbera, Manny Pichel and Behn Cervantes.

It was in 1978 when the MPP reached out towards a larger audience. For one, that year’s Urian awards was televised, giving the Gawad Urian a greater impact on the public and introducing the Manunuris to a bigger audience. For another, it was the year when the Manunuris launched the Urian Film Festival. Co-sponsored by the Cultural Research Association of the Philippines, a group of teachers and scholars of Philippine culture, the festival aimed to show the possibilities of the Filipino film to students of the U.P. and the Ateneo (most of whom ignored the “bakya” Filipino film), and to convince them to support it. Before each screening of the eight Urian-Award-winning films, a Manunuri read a critique of the film explaining to the audience the merits of the film which made it win an Urian award. Eight award-winning films of the first two Urian years composed the line-up of the first Urian Film Festival, while the second film festival held in 1980 included some films nominated that year.

Aside from reaching out to a wider audience, the year saw the Manunuris deepening their film interest. .First, the group clarified that the reviews of each member depend chiefly on his background. One with a literary-philosophical approach would usually gloss over the technical aspects of a film to concentrate on its content and the performance of its cast, while one who is more technically-oriented would pay as much attention to the cinematography, editing, and sound mixing.

Nevertheless, the group became more and more conscious of the technical aspects of music and sound, because these two are traditionally the most ignored and therefore, the most backward, aspects in Filipino filmmaking. Second, to understand the philosophy and techniques of filmmaking in the country, the group instituted a series of lecture-discussions among its members. This enabled the more theoretically-based to have a greater knowledge of the technology of film, and the technically-oriented to think about the perspectives of film in this country. As an outcome of the discussions, the group saw the need to come out with “think” articles that would deal on the different aspects of filmmaking, especially since MPP film reviews already tended to attack the same faults of Filipino films over and over again.
(Source: The Urian Anthology 1970-79) 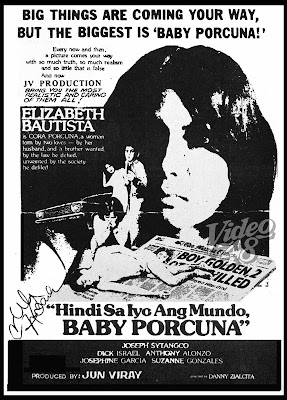 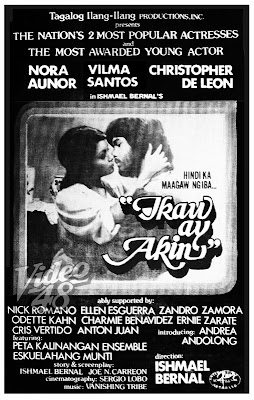 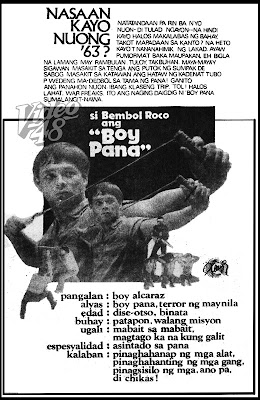 Long time no read here. :)
I've been busy directing 2 TV shows and it's quite hectic. I have a month's vacation, so while waiting for the next sched, why not visit your wonderful blog.

I remember this Manunuri ng Pelikulang Pilipino. Many movie talents were quite disgusted by some of their policies in selecting the winners, and many insiders in showbiz that time used to joke, calling the group: MANUNULI NG PELIKULANG PILIPINO. I'm sure it was started by some group who were so gung-ho to get an award but never received one. Mga Pikon! He-he. What's more, when some of the Manunuri members directed movies later, the reviews by other critics who were not a member of Manunuri were actually, truly, absolutely – MEAN SPIRITED! Dyadyaaaang. AKIN ANG PAGHIHIGANTI, sabi nga ng titulo ng isang pelikula. :)

The whole scenario ended up like a FREE FOR ALL, almost akin to OXO vs. Sigue-sigue. Lol.

And this sorta thing really boggled my mind. The Philippines is rather ADDICTED to the VICE of GIVING awards to just about anybody and anything. And because of this, nobody gives a hoot outside the country, even if a performer have 100 awards for best actor or whatever. Outsiders think it's all a joke.

They should pass a law to just retain two award-giving bodies in Philippine movies:

If we go beyond these two award-giving bodies, then let's give awards to everybody, including the BEST MAGTATAHO.

Nice to hear from you again JM! Thanks for sharing. It definitely made my day!